This is a T-rex I’m working on. I’m still working on the mesh and textures. This is Jason Pierce’s Ludwig armature that I modiified. It may be a while before I’m able to finish this project. I’m going to use shape keys to bulge the muscles and soft body modifiers to add jiggle to the flabby areas.

One of the things I’ve been experimenting with is trying to duplicate the shrink-wrapped skin over the ribs as seen in these videos, rather than simulating ribs with a normal map.

My problem is that each rib pair is a separate object. But when you create a shrink wrap modifier, there can only be one target object. Does that mean I need a separate modifier and vertex group for each rib? Or is there some other way to simplify it? 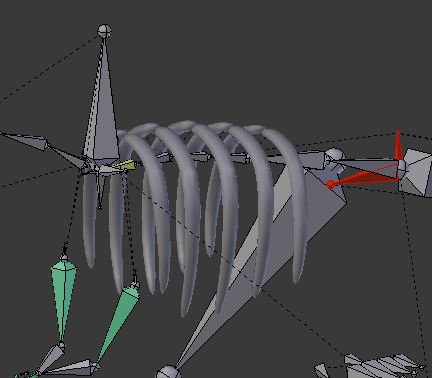