First its a privilege to post here! I never thought I would do it, but here I am posting. Things actually got bad enough for me that I had to go to posting, usually I can figure it out on my own with tutorials or forum posts on sites like this, or the blender wiki.

Anyways, I have tried several settings, re-sized boxes, looked for tutorials, even looked on this site before signing up, none of the suggestions worked. I also found a similar forum post, but it did not solve my problem either, and I been spending 3 days nearly on this project I am working on. I would like to keep from having to upload a blend file, but if I have to I will.

Now I know I saw a similar post before on this (it was closed), but let me get straight to the point of what I want to make first of all. I want pure chocolate that pours onto a ball, (the ice-cream), so basically chocolate covered ice-cream. I tried several methods that failed, one being the regular “fluid”, and then the “inflow” and shutting it off in key-frame animation. But the final result I want is only the chocolate on the ice-cream not the animation itself obviously.

Now, I know that setting values is important, and the right sizes matter, and even the size of the bounding box is important for the fluids. I did make water before just playing around with the settings just fine by following a tutorial, however, the settings are a puzzle to me as to what makes things work a certain way. For instance, I have a fairly small Domain Box, and a small Ball being used as the Obstacle, and then there is a small cylinder, (was a sphere before using a cylinder for a note), used as the liquid source, however I tried inflow, and just regular liquid settings, but I just can’t get the right effect I want.

Obstacle Ball: 1.957 on all sides, I know I should probably make it 2, just though that now

Fluid Ball/Cylinder: Scales I have tried for this is between 0.04 / 0.05 / 0.1 / 1.0 ect. But currently its lower than .05 when using inflow. The size is that small because I wanted to try to simulate chocolate being poured from a small source, like a bottle. I was thinking it might help the spread while making it inflow, because in previous attempts as a sphere and liquid only, it did not spread evenly and was at around 0.5 - 1.25 scale exactly.

The Problems I am having:

No matter the resolution, render amount, scale, you name it, the following have been an issue for me.
The Chocolate does not have randomness.
It does not evenly spread on the surface.
It does not have the drips sliding down the sides of the ice-cream like real chocolate would do.
It has only 4 Drips that slide down the sides when it is higher in real world sizes.
When using inflow and a smaller inflow source it drips.
The center top of the chocolate is not always smooth, has dimples, or breaks open even with higher resolutions, and no-slip settings.

I was wondering if anyone has had as much difficulty as me with Chocolate? You see, the Chocolate, no matter what settings I use, either does not spread onto the surface equally like I am expecting chocolate to do, or it leaves a hole in the center, or (which I am trying to use inflow right now as of posting this), it drips, no matter what scale I make it, .001 .010 .1 .2 .3 and so on it does not flow. I changed the values of the bounding domain even, seems to have little effect on it, it was not doing this before which is baffling me right now. And yes, I have tried messing with the Viscosity properties, and even used the suggested values for chocolate, and I even made the chocolate sticky, “No Slip”, and same for the Obstacle. I even tried playing with the values of almost everything in this possible, and it has been driving me insane, even tried 200 on the final render values after bakes, and it sometimes looks worse and too “drippy”, and too random, and not thick and evenly spread like real chocolate would do and have small droplets as well. By the way, I seen a tutorial of someone making a chocolate covered donuts on You-Tube, which did spread evenly, but he did not show exactly how to do it, only what was needed to be done to do it very quickly and briefly. I tried to mimic it, and failed, it went on smoothly, just not evenly like his did. I guess Torus is treated different than Spheres.

Anyways, I am hoping someone has had experience with this, and has figured this out. The funny thing is, I started this for fun to play around with, but became obsessed and fascinated with it. Because, after figuring out the WATER thing, I really wanted to make chocolate. But, seeing how difficult it is, I wonder if it’s really worth the headaches.

Also if you can do it, kudos to you, teach me please? And, thanks ahead of time!

I will really appreciate this much!

I still have trouble getting the results I want from the fluid simulator, though I am no expert by any means. What may help create better results is to increase the subdivisions – no matter the resolution you chose, if there isn’t enough geometry the liquid might not split apart into the more detailed forms that you want like drips. Also, you may want to make sure your obstacle’s topology is conducive to creating varied drips. If it’s a completely even, smooth surface, there’s no reason for the liquid to have drips because no part is slowing down the slip more than others. Maybe you could create a duplicate sphere and raise parts of it where you want the drips to begin, and then replace it with the smooth one after the baking is done? You may also just need to take a bake result that is the closest to what you need and just sculpt the hell out of it.

Another thing you may want to experiment with is the speed/time of your animation.

Here is just an example: 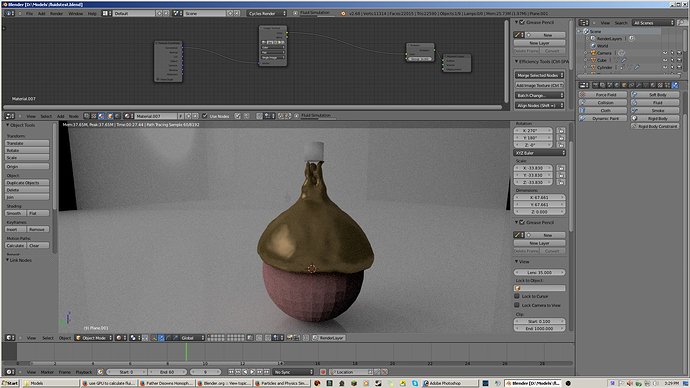 As you can see, the chocolate is too even and ends up getting coated, and does not have droplets dragging down the sides like I am wanting… I can’t seem to get it to do this, even when playing with the “Slip” settings. Right now I am still trying to fool with this while waiting for a post. This is also set at 100 Resolution and Final not preview.

Ah! Thanks Tyto, I did not think of that, I am trying to keep the liquid low poly though, I understand the polygons effect it greatly, but, usually that requires some compute power and a lot of previewing renders to get it right. I will try it though and see, may have to leave some rendering on high settings over night, as depending on detail, scale, and such my processor can only do so much, its a Duel Core after-all, I am still in the stone age on my Processor, but I have an awesome Graphics Card. GTX’s with there CUDA cores are good for cycles, but the GPU is not going to help my Processor go faster! Anyways I like your idea and will give it a go! And my previous Post, is… well waiting for approving, so my reply’s will be late.

I think I give up for now, this is too much work! I left it over night baking with the idea you gave me Tyto, and it still did not work right, and was too thick, I lowered the scale to .010 and it remained too thick, and still coated more than dripped on the sides. Hopefully someone can help me with this.

Okay, so I managed to get it done, here is a test render!

Thanks Tyto, your advice worked, after fooling with some values and increasing the detail I managed to get it to look like the following test render beyond HD format. 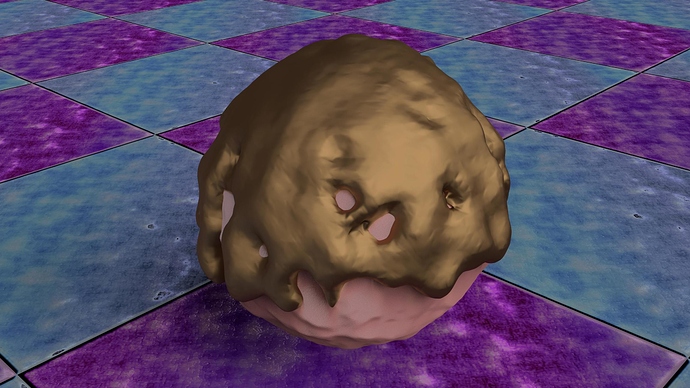 Thanks, Atom, It did help me at least understand how I can avoid using too much CPU time, I did not think about the Preview was also calculated, that’s like double kill there. I thought it render all number settings for Final Render to the Max setting you set. Now that I know this, I can get better and faster results for any liquids!

It also gave me ideas on how to manage time, scale, and flow. I just kept the Chocolate at a default 3 value in the viscosity, but I never thought of using higher values…

However, it is a shame that I have to have higher Final renders, my Graphics card can only handle 512 MB of CUDA Memory, and higher polygons eat up my CUDA power, and my CPU is slower than my GPU…

Blender Internal still renders just fine. There is really no need to use Cycles from what I see in your posted image. Why wait?

My main focus is Cycles, its faster and nicer rendering. Plus I need to learn how to limit Polygons, for Game Design, and similar projects and sells.

Also, I am planning to add more to the render, a Cone, cloth maybe, some drippings of ice-cream, and make the ice-cream look like it had been scooped. Maybe even do some more work on it, and reduce some polygons if possible.