Luma Matte in front of light?

I am new to Blender and have had a huge help learning it with all the support around the net. Thank you! I have one question that I haven’t been able to solve yet:

I am creating a simple 3D title in front of a time-lapse video of clouds going past the sun. I need to create the subtle brightening and dimming of the sun that happens in the video to the light that is on the text.

I was thinking of creating a luma matte out of the video and inserting it in front to the light, but I’m not sure if that is possible. Is there a better way?

There’s a number of ways this might be done, some in the Scene and some in post-processing, and all depending on the renderer being used (Blender Internal Vs. Cycles for example).

If you want to filter your existing Lamp in some fashion, mainly luminance, you could convert your video to greyscale and use it in the alpha Influence channel of a Material w/Texture (Image or Movie) applied to a plane set in front of the light. This would act a bit like an animated neutral density filter.

Lamps can be given a Texture that they then project. It’s not quite as simple as that but you can see the possibilities.

With Indirect Lighting (Blender Internal), simply applying the movie as a Texture to an off-camera plane can act as a supplementary light source, complete with color variations per the imagery. I’m using this extensively in parts of my show reel and it looks cool, very interactive in the Scene.

In the Compositor the movie, either greyscale or color, could be used to modulate the Factor of various nodes, and with Render Layers, or your imagery rendered in layers, it could be applied selectively to particular elements in the Scene.

Or, you could simply animate your light sources, synched to the BG movie.

Which way to go depends on the look you want.

Ok…i’ve been exploring your first option about Alpha Influence Channel of a material applied to the plane. Since I am new to this program I’ve been trying to achieve what you said and I found a tutorial I think is along those lines

Is this what you were talking about?

Yeah, that seems to be informative, though it tends to concentrate on getting the transparency to show in the UI, which requires invoking GLSL, which requires a capable graphics card. But any image, be it still or animated, can be used to influence a Material’s transparency. Color images get converted to a greyscale version in terms of how the effect is calculated, so for greater predictability, pre-converting to greyscale is probably better. Such images do NOT need an alpha channel of their own to be used as an Alpha Channel Influence. The image itself can be used. Having an alpha channel is handy in many situations (such as when the alpha masks out part of the RGB portion of the image), but it isn’t a requirement.

If you go this route, you’ll have to set any material you want affected by the “filter” to be set to “Receive transparent shadows.” This allows the partially transparent “filter plane” to cast its patterned shadow on these materials. It is not enabled by default.

This is an example of the result using a still image, but there’s no reason a animated sequence could not be used as well: 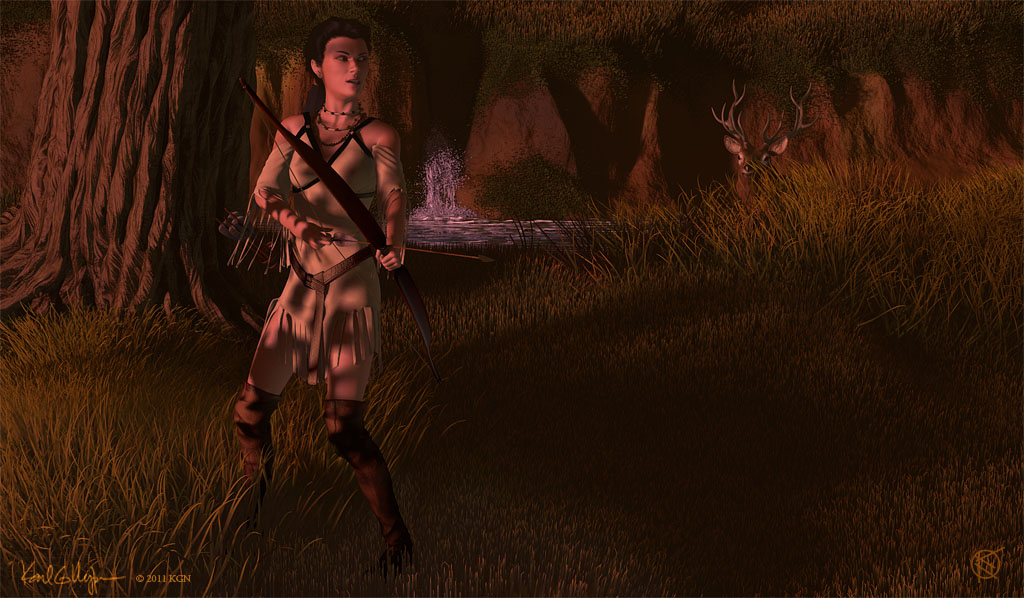 Super. So I got what I am going for using one of the preset textures; distorted noise.
In material, I selected Transparency and turned the alpha to 0.0. In Specular, I turned the intensity to 0. Under Textures>Influence, I selected Alpha and left that as is.

With these changes I was able to cast a shadow of the alpha portions. But the problem is when I replace the distorted noise texture with my video it casts a solid shadow. I converted the video to greyscale. It has clearly defined areas of white, black, and grey. So I’m not really sure why it has that effect?

I’m not sure how close this is to your suggestions. Happy Easter.

Some things to try:

In the Texture context for your movie, in the Image Sampling section, look for the Alpha options and enable “Calculate.” This uses the RGB imagery to produce an “internal” alpha channel Blender can access.

In the Influence section, below the channels options, is a color slider and a checkbox marked “RGB to Intensity.” Try enabling this option and setting the color field to pure white. Use Multiply as the blending mode (default is Mix, I think). In this case you might also have to turn the Transparency up to 1.0 in the Material.

If all else fails, maybe post your greyscale movie somewhere & I’ll see if I can get it operating properly. Sometimes it takes tweaking things in various places you might not expect.

I tried the settings but the result was the same.

I was able to achieve something playing with the Fresnel and Blend settings in Materials>Transparency tab. But it doesn’t give the result of a true alpha; it is much dimmer.

Without looking at your .blend file, I can’t really offer any more tips. Instead I put together a small demo package illustrating how to use a movie as an animated texture with alpha that casts shadows on a subject. I can’t pack the movie files it uses into the .blend so it’s all in a ZIP archive (~520Kb) that I could email to you if you want to send me an e-addy via PM.

I’ll send you my email. Thank you so much for your help. Without it I wouldn’t have gotten this far.