well… here it is my first lunar spaceport

it is supposed to be a spaceport around 2100 on the moon. Its located at the northpole (that’s why the sun is so deep and the shadows so long…) within a crater to protect the poeple from solar flares and similar stuff.

I put about 1:30min work in it right now. And i still have lots of ideas, But I already would like to have some feedback of you guys. I know there are no stars yet, and no earth in the backround ;). i’m especially concerned about the surface of the moon. That seems to be the most difficult thing to do… has anyone of you guys ever done such a surface? (it’s supposed to be very smooth in some parts, and very rocky in others…)

just to give you an idea about the dimensions:

the moonbase on the upper left side is about 60m in diameter.
The launchpads about 40m. And the mountain on the right side has a hieght of about 500-600m.

How come everybody wants to invade the moon?

The moonbase is quite far.
Do you have a detail or something?
In artists impressions they usually want to have as much detail as possible AND get as much of the surrounding on the image as well.
Can often be done by faking a wide angle lens of let’s say 24mm.
P

You have to be the first guy to not put stars in your space render!

I give you the $1,000 prize! I like the view…now for some motion blurred space fighters flying by and you will be money!

well… a small update, I invested about 1h this evening replacing all the buildings for a better view as you guys suggested, and adding some more detail, of course the image is far from perfect, yet: C&C welcome :D.

btw: i want some part of the picture to be within shadow to place some light effects in the picture. do you have any suggestions, where this shadow would fit in the picture? Or would you rather suggest making a “night” version of my picture, which gives me the oportunity to play with lighteffects ;)?

If this is a moonbase, it’s always night.
So I’d be happy to grant you that opportunity.
I think the setting is much better now than before.
You get to see more details, and more things you should note.

Like the platforms.
Right now you have nothing but halo’s on the sides.
Maybe you should try and create spotlights around them.
And when the ships land on the platform, how do the people go from point A to B? Isn’t there supposed to be a stairwell or an elevatorshaft?
Or is th platform supposed to open when a ship arrives?
If so, you should divide the platform so that it looks like closed doors.
A close up gives you unfortunately also the disadvantage of having to add detail.

It looks like you have two or more halo objects for each of the pad lights (blue). I’m thinkking you need just one. If you use a vertex and give it halo then you can set the rays and so on.

Base is looking pretty good. It’s a bit dark (all over) this would be a choice for the base though as the heat on the moon is pretty intence. A base would perhaps be best built in to the surface. This would do two things keep the radiation to a safe level and keep it cool. I like the cliffside base but perhaps it goes into the side beyond what you can see on the outside. The design is pretty cool. Perhaps some lights shining down on the pads from the cliffside.

Perhaps solar panels to get some electrical power (unless you have a different power source). A way from the pads to the base. Perhaps an “industrial” lift all the way down to the primary surface. This can bring people and equipment (say a rover down to the surface as well as people and equipment to the pads and bring them back up again to the base. You can use the “spacecraft” but then your using up fuel to do that movement.

I’ve thought of building a base into the rim of Tycho compound crater. The base would rap around the inside of the crator and perhaps go through to the other side (outer wall). This would give the base a day night operations and would be mostly protected at times from the sun (if the position was chosen with care). Inside the crator itself would be a massive solar farm progamned to track the sun.

In researching I found there are a few places on the moon that get absolutely no sun at all. Both the north and south pole may have (frozen water ice) although this is not confirmed yet. It’s perhaps the best chance at the north pole (good choice). You could perhaps show some ice near the base (it would be like frozen gold to be found on the moon). The did send lunar prospecter though in the 90’s to find some but didn’t find much even when they crashed it into the lunar surface. You would think that is a bad idea and looking back it probably was.

There is no mesh available for the moon. I’ve looked. There is a good map of the moon at USGS site.

It’s a big download though and for me atleast not to helpfull. Tycho is a there to be sure but I was hoping for more detail. A way to build a mesh from the map.

This site has quite a bit of info on the moon (images and so on. The Clementine mission took tons of photos of the lunar surface on it’s survey of the moon. You can search through the database to find the type of surface elements you would see on the moons poles. 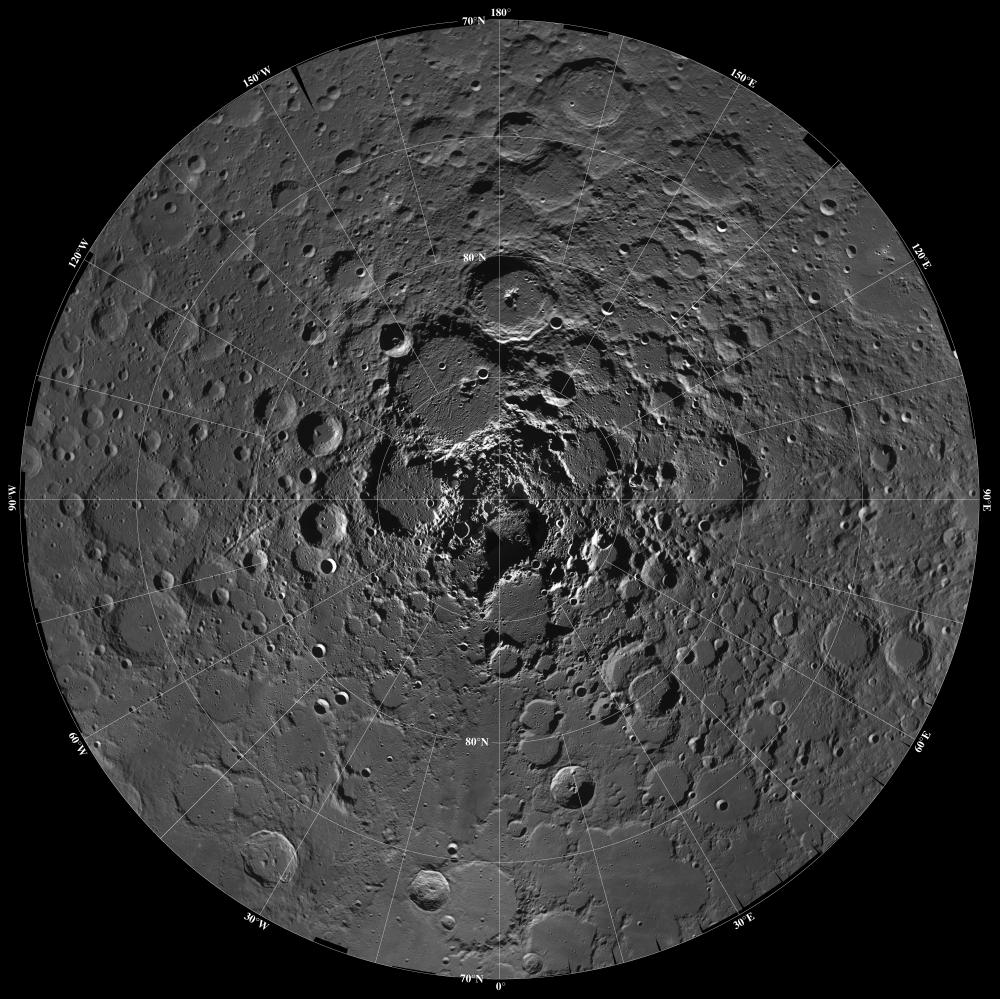 This will give you a mosaic of the lunar surface. Don’t forget the north pole is at the bottom of the moon. Pretty wierd I know but that’s the way they have it. I had thought it strange when I first thought of the base but that’s the way it’s been for a long time.

Once you click on the image to get a detailed image you can modify it to what ever you like. Double it’s size and so on. The resolution of the blown up images are pretty good up to 2x’s

Your base is pretty darn cool so far. Looking forward to updates. If you have any lunar questions you can PM me here at elsium

Just like someone else suggested, you should have more details to the platform and if it is the moon it should have craters.