. I would love apple to make a successor to the vega duo, but I doubt it

but then you also need the render engine to support it

Some nice new developments that hopefully bear fruit in the near future. Cycles-X is being re-designed to be friendlier to non-CUDA languages, so it should be much easier to incorporate Metal support into Cycles-X. The devs said as much during their 10th anniversary interview.

Interestingly, OpenCL has been abandoned in Cycles-X. While the devs obviously favor Cuda and Optix, due to the maturity of the language and support from Nvidia, they remain commited to supporting AMD, Intel and Apple Silicon. They’ve basically stated that multiple languages are the only way, like Metal and some other ones I’m not familiar with.

An interesting note about this. In recent years, the entire industry has been signaling hard that OpenGL and OpenCL are history, with future development going towards languages like Vulcan, DIrect 3D and Metal. Does this validate Apple’s decision to deprecate these languages, or was it Apple’s deprecation that pretty much forced the decision?

It’s also been revealed that Apple is providing programming support in porting Blender to Apple Silicon. It’s unknown how extensive their support is, or if they will extend that support to including a metal backend for cycles (or the rest of Blender, for that matter). While this isn’t exactly huge news, it shows that Blender is directly on Apple’s radar and they are helping with the effort, which is great news and shows that there is some commitment from Apple for the 3d art commmunity. If that wasn’t already apparent, anyway.

I realize that none of this is revelatory, but I thought it would be nice to summarize the good stuff happening lately for anyone new to this awesome and epic thread.

Yeah, positive prospects. Thanks for the summary.

I’ve decided to make Octane the renderer to focus on from now on. It’s powerful, flexible, fast, offers a free version, and is currently the only renderer that includes full macOS Metal and ARM support.

Made this last weekend, as an Octane exercise:

A tribute to the Teenage Mutant Ninja Turtles, based on a sketch by Kevin Keele. Hope you like it!

Hey everyone, I am one of those Apple users, who is still rocking an iMac 2017 base confic (i5-7500 + R570) and Macbook Pro 2015 (i7-4870HQ + R370), both working fine for my daily tasks. However, a year ago I’ve discovered Blender, and after Apple had already killed CUDA, OpenCL/GL, 32bit while still ignoring Vulan and the BF, I have considered to ditch the platform entirely as people said “Mac is dead for 3D users”. However, the similar XPS 9500 suffers from mediocre QC and fans/heat, while desktop GPUs became really expensive. And Win10 still kinda annoys me. In the recent weeks I’ve been reading more and more about the sensational M1 performance-per-Watt magic and that great Macbooks with useful keyboards and ports are about to return soon.

So… what would you recommend me? Shall I remain patient a bit and wait? I understood correctly, that albeit the lack of full native support incl. Metal, overall performance on the M1 machinses seems to be more than decent already, right? So native support + M1X/M2 will make things even (much) better?

I am not using Cycles, only Eevee (love it). I prefer keeping it activated all the time in my viewport and on my 150k polycount character (50k with all subdiv mods disabled) performance so far is solid, but the MBP gets noisy quickly and my future scenes will become more complex for sure. I’d like to stay on MacOS as its still a great system for daily work, Photoshop and Music/DJing and not having to buy an extra Win10 device just for Blender. This thread keeps me optimistic…

I use the M1 mac mini for work and cannot complain.
The CPU is equal to beating my old macPro 12 core XEON.
Ture the mac mini GPU cannot even get close to the 2 x GTX 1070 Ti in my macPro running windows and CUDA.

If you want I can turn on remote access to the mac mini and you can open your model there or send me your model to test.

But what I was able to see from your posted model is that the M1 mac will easily deal with it.

I just the fact how silent the mac mini is. period !

Get one now or later ? good question. if your current gig works wait till the next version.
I assume the GPUs will be better!

A bit unrelated but has someone tried Marmoset Toolbag on the M1?

Thanks a lot! You are very kind

Everything I did so far was CPU-based (due to the lack of Metal support), so if I get even more performance with much less heat/noise, I will be more than happy! Yes, I will wait a bit, so far my devices are working fine, just planning for the near future.

Everything I did so far was CPU-based

For CPU the current mac mini will already be an improvement.

Maybe somebody who does a lot of eeVee work could speak.

I found with the design work I do no issue at all.
But I don’t sculpt heavy meshes.
And when I do renderings they are for product design or interior design with eeVee.

I however noticed that actually compiling shaders for eeVee on the M1 mac is much faster than on my mac pro.

I am also a Mac user. Do it the way I do. Buy the Mac and a PC with Windows/Linux and an Nvidia. This is currently the best platform for the next 2 years. Then we’ll see what else Apple does. Don’t wait for Apple anymore!

I am also a Mac user. Do it the way I do. Buy the Mac and a PC with Windows/Linux and an Nvidia. This is currently the best platform for the next 2 years. Then we’ll see what else Apple does. Don’t wait for Apple anymore!

Thank you for this tip - this works really well too. Very good to know when the mac is not really next to the mac mini. I just read about Parallels Desktop and Windows ARM on M1 macs and with Moonlight this is all not needed! So happy !

Here’s an interesting thread about the relativity of Metal versus OpenGL:

Now that GFXBench Metal is out on OS X, when can at last test Metal performance and compare it to OpenGL. Here's my results (13" MacBook air with 1.5 GHz i5, intel HD 6000). I only use offscreen tests since V-Sync is clearly forced on the onscreen...

Just to be clear… you know that’s a thread from 2016, right?
Even though it was favoring Metal with higher end machines, if I remember correctly that Benchmark had inconsistencies and eventually died.

The developer of MoI 3D mentioned the thread, so I didn’t didn’t pay attention to the dates until someone over at Discord mentioned it, haha.

But despite the age of the thread, the MoI 3D dev pointed out that addressing Metal does not equal getting the most out of Apple hardware, which I previously assumed was the case.

the MoI 3D dev pointed out that addressing Metal does not equal getting the most out of Apple hardware,

I think it depends on what you’re using it for. If you look earlier in this thread you can see an Octane Facebook group post I linked to. In it the Jules (CEO) was commenting how OpenCL is pretty much dead, which everyone seems to agree with now, (cough blender

) and not only this he points out that OpenGL and OpenCL just can’t do certain things that Optix, Metal, and Vulcan can.

So yes switching to Metal will give you performance advantages, when doing something more demanding than just gaming benchmarks.

This is why now having these multiple CGI benchmarks are so important, rather than relying on someone playing a game and just highlighting the FPS in COD and claiming card X as the victor.

Talking about benchmarks.
Quite impressive I though the GPU would throttle more in the M1 Air but this is not bad I think. 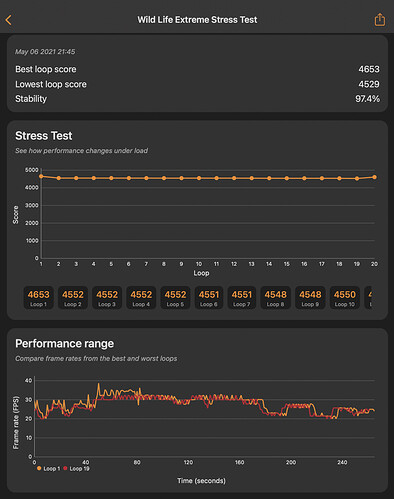 Also quite interesting in a way… 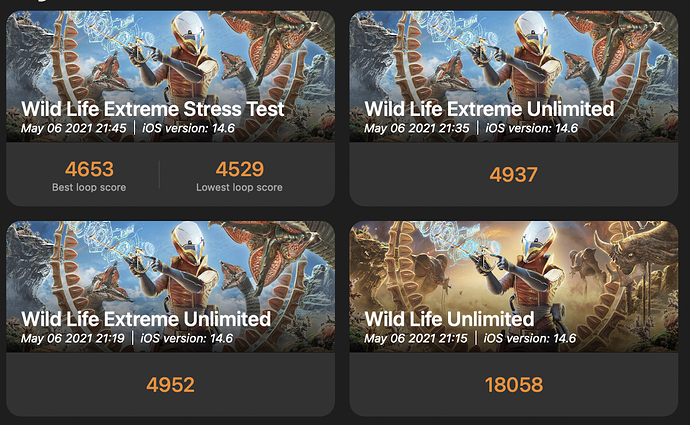 Not bad for the M1! Should the M1X/M2 reach a level of about 9000 aka GTX1060/1650 without all the heat and fan noise, I would be more than happy. For the upcoming big iMac desktop I would expect more power of course, as cooling is far less of an issue there, but for a mobile device, this would be amazing (and a massive jump from my 2015 MBP which runs Blender just okayish).

I am really expecting then to double or triple the GPU cores for the 16” MBP anything less and it is not that “pro”.

But despite the age of the thread, the MoI 3D dev pointed out that addressing Metal does not equal getting the most out of Apple hardware, which I previously assumed was the case.

That’s application dependent. The dev is right; it’s just a compatibility issue.
Those who used OpenGL already optimised the whole of it. Covering Metal is, quite plainly, just a waste of money.
Moreover: OpenGL covers 70-85% of all use cases out there. From video gaming to rendering and so on. Vulkan, Metal… It’s all for a 15% AR/VR and something else future-proof most of people doesn’t need…
So you can see while devs are yawning at it…

Just don’t get comfortable with legacy tech that’s been optimized to the gills but has no more room for growth by design, just because it currently outpaces newer stuff with a larger potential but less mature in development.

“No one will use that” or “This is how we’ve always done it” are slogans of dying companies or those without vision.

Don’t let the comfortable “yawn” you into irrelevancy.