Implications of the new M1 Max as a 3D workstation processor, as in having a GPU with 64 GB of VRAM (discount whatever the OS and apps need to work at any given moment, of course)? Even if you end up using half of that due to circumstances, it’s still far more than what nVidia or AMD are offering in their highest-end gaming cards.

What is offered in my country is that only highest spec 16" has 32 GB RAM. No option to customize. At least not at this moment. I think I would be fine with 16 or 32 core GPU but definitely would need 32GB or RAM. I have that right now on Laptop PC and often work on scenes that go over 16GB. Also not sure that I would need more than 16 core GPU, maybe 24? I work now with 2060 with 6GB VRAM, not sure how that transfer to M1 GPU. But will wait to see how much heat it produces. That is most annoying thing for me on PC laptop. I do not use it for final renders, but some preview renders while doing lookdev … man it can get hot…

Yes it is even more than an A5000 Quadro which has 24 Gb, potentially as good as an A6000 memory wise if you use 48 GB and keep the rest for system memory, which still would keave 16 GB for that

Just looking at Vram the Macbooks are “cheap”

Also compared to the Lenovo with the A5000 Max Q 16GB Vram it is actually bot that expensive in a way. 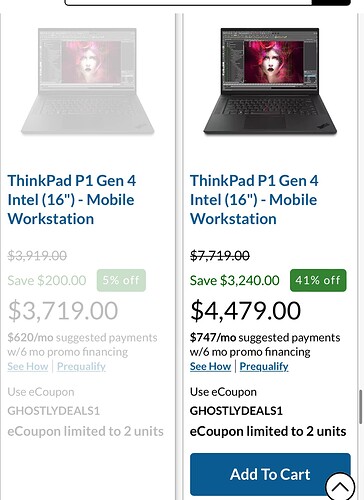 Also I doubt that the smaller disk ls will have that speed but we will see once reviews hit I hope.

Thats why I never get the idea if a gaming laptop.

We do suggest to students to get one for interior / industrial design because well it has 95% NVIDA GPUs that are good.

Also for those asking about what MBP display size - when I used MBPs I got the smaller one because of the portability and worked primarily on a second monitor in the work space. To me that was a good compromise between being mobile not getting bankrupt and not heating my body too much.

This time the price difference (14" vs 16") is practically negligible.

The $200 you save going with the 14" is probably the greatest differentiator here.

Gonna get the base model and get to work, and upgrade if I earn enough money with my results.

). He said that he was planning to do it after the whole Cycle X thing. Is there any update now that Cycle X is almost complete? (I guess)

Exactly, 3 button mouse all the way.

Logitech MX Master 3 is great, better ergonomics and you can charge it while using it

Logitech MX Ergo all the way!

Yup. I use a trackball. I’m a FRREEEAAKKKK!

I tried the Logitech MX Master 3 but I wasn’t smart enough to learn its magnetic wheel. I love the G603 although the buttons are a bit loud.

Trackballs are fun but have not used one in ages. Sure looks interesting.

Nearly bought the MX vertical but could not imagine that working all too well.

I’m now wondering why I spent so long NOT using one. They’re more precise once you get used to them, and they don’t make my wrist hurt after using one for 20 minutes.

True but they can make you thumb hurt if you are not used to them.