So with the Blender Guru competition on photorealism running I thought it was about time to try my hand at photorealism. I chose to do a macro scene to make a change from the normal kind of scene I do. I’ve worked for a couple of days, it’s not there yet but I feel I need some feedback to get it to where I want. All comments and critiques are greatly appreciated. Thank you for taking the time to read this thread 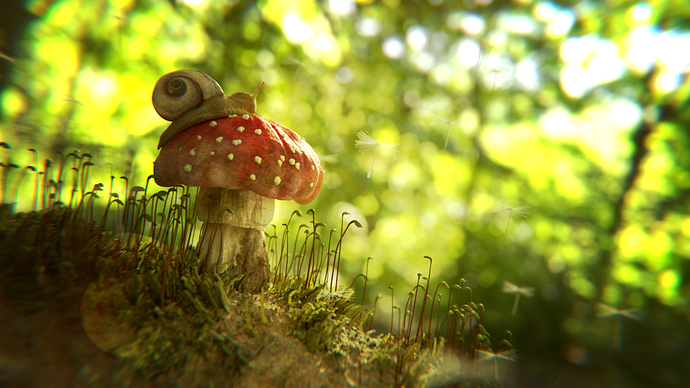 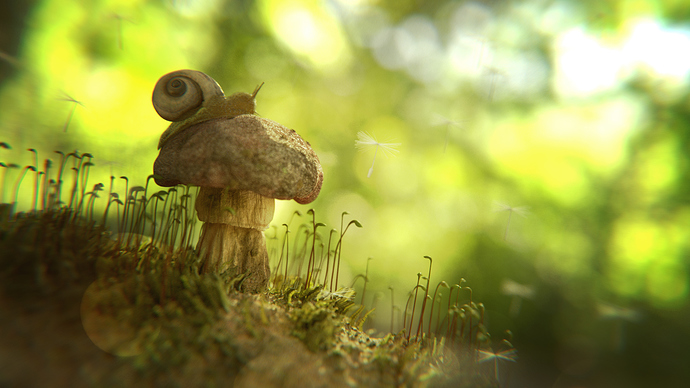 I think that the texture on the mushroom cap makes it look like a rock. maybe make it whiter, smoother, and more round. Snail is very well to-scale, and everything else seems awesome.

Great work i really like the look of this. My critique is that there is a lack of contrasting colours. The current scheme is good but maybe you could draw focus by making the mushroom or the snail a brighter colour. This would make a really nice focal point

This is a nice reference I just found on the web.

Just out of curiosity, what’s 3D and what’s real in your scene?

Thanks for all your feedback

@Robert Banks You are definately right about the cap texture. I’m currently retexturing it and hopefully I’ll have another render soon

@Dominic Butler Thanks very much! I taken on board what you have said and increased the saturation of the mushroom’s cap.
@Tiago.M I wasn’t planning on moving the camera any closer, describing this as a macro scene wasn’t the correct terminology I will work on the modelling more none the less. Other than the background which is part of the environment texture the whole scene is 3D. I may post a wireframe in the future

Okay here is a new render. I’ve adjusted the mushroom cap mostly. I also made the depth of field less shallow so the whole cap was in focus. As always comments and criticism greatly appreciated. 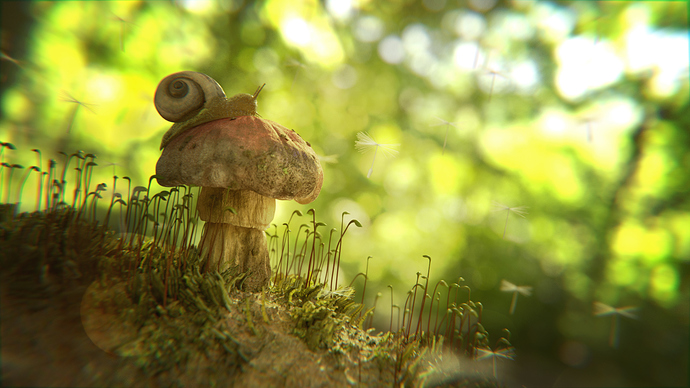 First of all: That is a really nice and impressive image as it is now.

But I have to agree with others. The mushroom and the snail doesn’t look photoreal for several reasons.

Some time ago Andrew Price said something about the basic principles of photorealism in one of his tutorials. And he mentioned accurate modelling as the first and most important one. And with respect to this it’s mainly the shell of the snail that doesn’t looks natural to me. Also the area where the shell blends with the body of the snail needs some redefinition. The modelling of the mushroom looks very natural too me, although I couldn’t tell what kind of mushroom that is - but that doesn’t mean anything, because I’m not an expert at this:)

The second area that could be enhanced are the materials of the snail and the mushroom. At the moment they don’t look like a snail’s or a mushroom’s tissue. I know that this is really difficult. But this is one of the rare cases where I’d really recommend the use of subsurface scattering. Especially for the snail. And you may want to test mixing some transparency into its shader. The mushroom could benefit also from SSS.

And then a tiny little subtle touch of sun on the ground could make the lighting a bit more interesting and it would blend better with the background plate, which clearly shows a sunny day.

Just my humble thoughts. But you should be really proud of what you achieved so far!

Oooh, that looks beautiful! Great composition and texturing. The little floating seed thingies look a little weird, as they all seem to have 4 distinct tufts of fur, making it look almost like a dragonfly. I might recommend making it more even than that. Also, I would crank up the SSS on the snail and the mushroom. You should probably tune down the chromatic aberration effect as well.

@minoribus Thank you so much for the time you took to comment on my piece. I agree with you on the shell, I’m going to sculpt more detail and adjust the shape somewhat. I have add SSS on to the snail and mushroom and it is a marked improvement, thank you for the advice. With regards to the type of mushroom it is no specific species, I have took some artistic liberty and combined various characteristics I liked in a few species.

@Owldude Thank you very much. I know what you mean with the seeds, the 4 tufts come from the depth of field, I’ll see what I can do to change that

I will definitely tone down the chromatic aberration also.

Here is the latest render

Yeah, much better and a good improvement. The SSS and the touch of color, which you added by changing the mushroom’s head, added a lot to the image. It was close to monochromatic before. I like that.

Nice work so far, BenWebster! I think the texture change to the mushroom makes a big difference. Not only does it give it a splash of color, it also now shows a much more defined highlight, which along with the surface details and the small yellow bumps, make it look much more intricate and believable. Your plant life and snails also have some nice details to them, which is always important when creating macro shots.

I do also agree that the chromatic aberration could be toned down a little, but it’s not too bad.

I feel like the snail could stand to look more wet. Right now the surface of his skin looks relatively dry.

Looks good, but like the comments above i would turn down the roughness of the mushroom, it looks like a rock. Other than that i like the lighting.