Any kind of critique on this would be very helpful. Mean or complimenting, feel free to judge. This model means a lot to me as it is for the animation short i plan to send the college i want to attend, and/or to scholarships and all that. I want this to be perfect, even though it is my first literal project in blender. So, my life and future is actually dependent on the total outcome of this project/ Therefore, i sincerely request any sort of criticism on this.
UPDATE: Model had a complete restart. This is the most recent product. Disregard the one at the bottom of this post (the one with the pink and blue background). You may scroll to the bottom of this page to glance at the renders of the newest version of the character. Thank you for your time, it is much appreciated (:

The updated version is the top image. 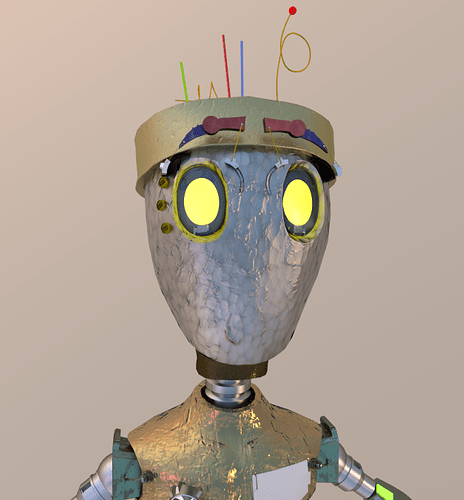 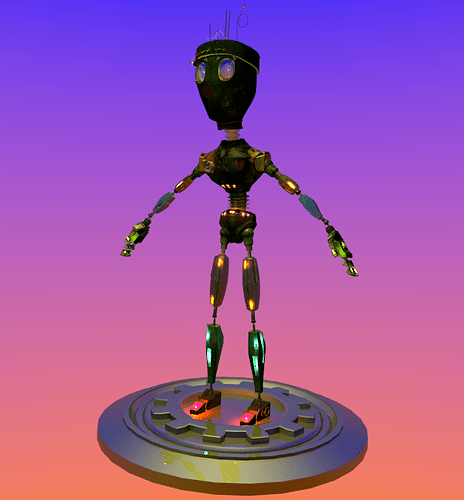 Overall modelling looks not too bad. The feet and face could use more detailing. His face needs more shape to it, it just looks too blank and expressionless.

Because of his head shape, he reminds me of Gir from Invader Zim. What are you going for here? Is it realism? If so, you need more structure in his joins. (knees especially) they are all connected by very tiny connectors. This means that all the mechanics are small, and being held on and putting tension on such a small area. Unless his knees are made out of some ridiculously strong material, they wont be able to support much weight if he is doing anything active.He looks like a robot that was put together from all kinds of junk parts. Is that what you are going for? Can you tell us anything about who your character is?

My apologies for not being clear enough about the character’s attributes, concepts, and background information.
I am going for a kind of character who would look good in a dark comedy. The short itself will be one that would have animation that is comedic, but after it ends, people will have to think for a while about life and stuff. The world this character is in is one that is filled with robots who do their daily lives right from birth as they were told. They had pre-determined careers, and life is very bland, really. This character is different.
My main goals on his modeling was to create a dark effect, but yet, keep it cartoony. I guess you could say that my main purpose of keeping it at least a tad bit cartoony is to fool the audience for just a bit. But, i tried as much as i can to keep every mechanism as realistic as possible, as though this thing can be made out of junk parts in real life and still move. Gir was a very big inspiration, i will admit that wholeheartedly. I’m flattered that you can see that, Scotchtapeworm. Also, thank you very much for the joint advice. Over the course of modeling it, i completely looked over logic like that. I will fix that as soon as i can. And, thank you M1C4HTRON13 for the comment. I will advance on that too. Any other things you would like to tell me to change in the model, go ahead. I love criticism. It only makes the blend better.

M1C4HTRON13, would you have any ideas about what i could possibly do to make the face more appealing to an audience? If so, please, i would like to know. I’ve tried some things but ended up disliking them, so, i’d like ideas from different parties.

A little more progress on the face. I’m just trying to keep a tone of shifting colors that coincides with the others. Plus, the caution tape kinda goes with the story of this being a character who is soon forbidden from speaking. 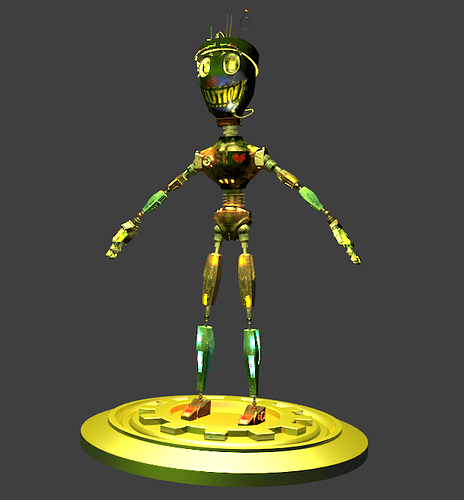 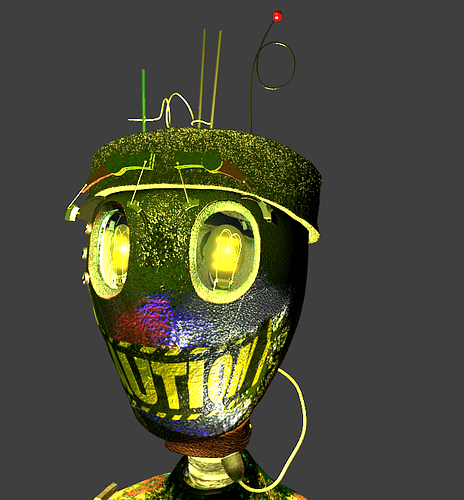 That’s a cool idea.some more crit on your updated model. The tape makes him look like he is smiling. Do you want that? If you want him to be frowning, or neutral, you can have the tape angled differently. Or maybe smiling is what you want. The texture on the tape is too bumpy. It should be mostly smooth, with a few bubbles here and there, and probably some dirt. I don’t know if its noise, or your texture, but the closeup of his face looks like fireworks. There is too much going on, and isn’t pleasing to the eye. his body as a whole has a lot going on, and is hard to read. He has too many colors.I’m not advocating to copy Clank http://www.google.com/images?hl=en&q=clank&gbv=2&sa=X&oi=image_result_group&ei=9cbTU4WxIoWTyATb54KYAQ&ved=0CBQQsAQ But just see how his character design is. Granted, he is not made from spare parts, but rather from mass production, but you can see how he could have been assembled from spare parts that were carefully chosen. He is mostly Grey with some black areas. his eyes are green, and the antane is red which is a complimentary color. I think this is an example of an amazing robot character, because of the simplicity (yet necisary detail) and the carefuly chosen colors.

Also, another thing I should mention. If you are trying to make an animated short, it might be a good idea to start off with something a little more cartoony and less realistic. Don’t bite off more than you can chew

This is my second attempt on the texturing of this character. At further completion of the top original model’s texturing, i got reviews that made me realize some, or a lot of, flaws with it. So, here is a well refined version of this model that i textured using shaders, which is big for me because this is the first thing i’ve ever done using cycles render. 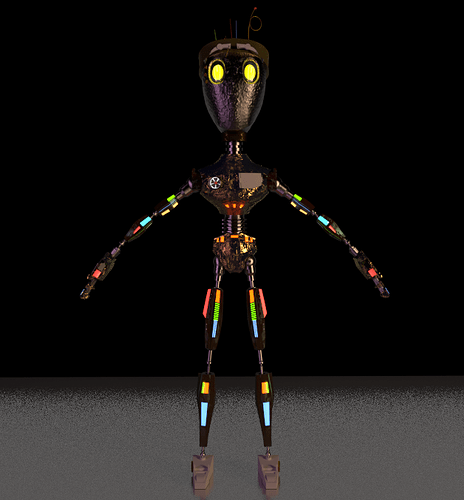 I like it, although the feet don’t seem to match the rest of it, texture-wise.

This is a close up on the face of the robot. 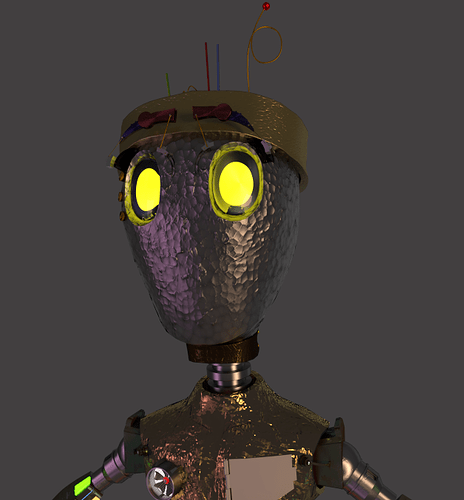 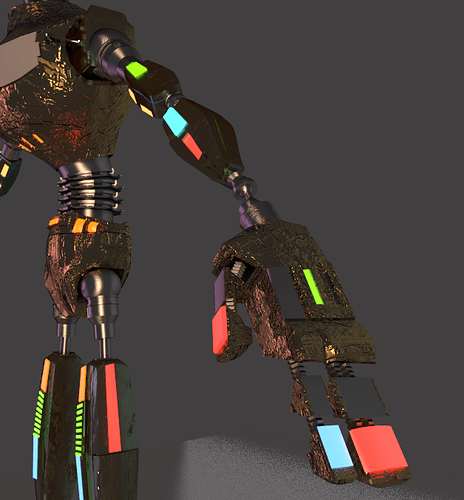 More updates will be coming soon. I’ll try to do some wireframes too, as soon as i learn how to do that on mac…

The feet are my next step.

Very interesting story and concept indeed! I like the model, keep it up! I think you should put some more detail overall, something like greeble could help. Checkout Blendtuts UV Sculpt tutorial if you want!

The lighting is looking great on the model

Thankyou so much for the critiques guys

Latest update. Nothing much changed, really, just thought it might be better to have him in front of a brighter background.

These are the node settings for the head.

These are the ones for the overall body.

More settings will be posted later. If you want to ask for any specific one, feel free to.