I’m dealing with a little issue that has me stuck: I have two or more objects using the same particle settings data, a mistake I made in early stages. Each one has combed hair, different particle edit on every object. I now need to change some settings independently, ones unrelated to combing such as child particles. To do this I obviously need to make the particles unique users. But because there’s a particle edit, I’m not allowed to duplicate or even rename the settings. The field is grayed out until I delete my edit, which I won’t because I’d have to redo the hair all over again on each character. 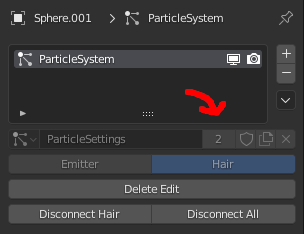 Is there any trick to make those particle settings unique without losing my edit, even a Python script perhaps? I tried disconnecting the hair but even that doesn’t free up those buttons. Here’s a simple example blend file to try it on.

I think this is a poor decision in the Blender GUI which should be fixed by default: Indeed there are settings you can’t change after you edited hair, but the particle settings should be possible to make unique or rename, as this allows you to modify things like render options or child particles which are independent of the particle edit.