hey all. i’m pretty new to the whole blender scene so I’ll try not to be as newb-ish. I’m currently working on a 3rd person mech assault type game that will feature 4 different mecha. All the levels are going to be very technological and there will be very few outdoor levels if any (actually i’m thinking about having a desert battle at some point in the game). What I need help with is the mech-modeling. I have successfully created one of the mechs that will be in the game and I am currently looking for a good way to animate it. The mech is made of many different parts i.e. boxes. What I did was I made each ‘piece’ of the mech out of various objects, usually boxes,cylinders, or spheres.

I need help in the following areas:
1.effective animation techniques
2.some way to incorporate mouse look
3.a weapons changing system

and that’s about it for now. I don’t mean to sound stuck up if that’s how I’m coming across. Any help would be greatly appreciated. I’ll put up some pictures of my failures later so that you can better understand my plight.

there are countless tutorials online dealing with animation, and a few on animated robots, or mechs. you use bones, but i think you have to place them exactly at the center or something. I’m not real up on it myself, but just put in a search on google for a tutorial.

here’s one on Rigging Mechanics.

you need to have a key (i.e. the up arrow) initiate a motion foward. here i made a video. no audio, just watch.

thanks for the video but i’m afraid i already knew how to do that. i have the walking animation done for my mech (thanks to the link you sent me i appreciate it). and now I’m trying to combine the walking motion and movement. only problem is that everytime i press play my mech just sits there.

my logic brick configuration is as follows:

the “&” sign means that the and controller is connected to both actuators. 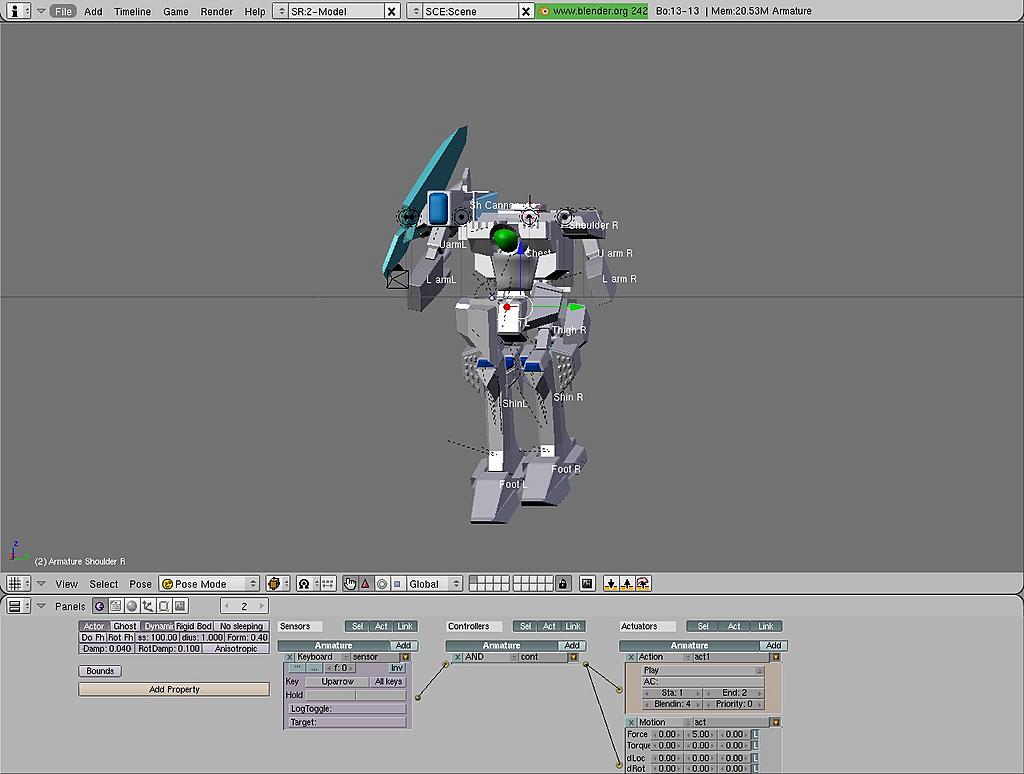 It has been a while since I have programmed a game but if I remember correctly, in the action brick below Play where it says AC:, this is where you need to put in the name of the action block (animation) where the movements need to be read from. A single character can have several animations in it.

Yes. bbelt is correct. In the space below PLAY, beside AC:, type in whatever you named your walk animation. And if you want your mech to walk until you release the up button, you’ll have to change ‘Play’ to ‘Loop Stop’. And is your walk animation only 2 frames? I’m sure it isn’t, and in this case, you’ll need to set the end number to whatever frame your animation ends on. If it is only 2 frames long, I apologize in advance.

well my walk animation is only two frames. this is just a file i’m experimenting with. i have other copies of the mech in different files.

included is a picture of my logic block set up 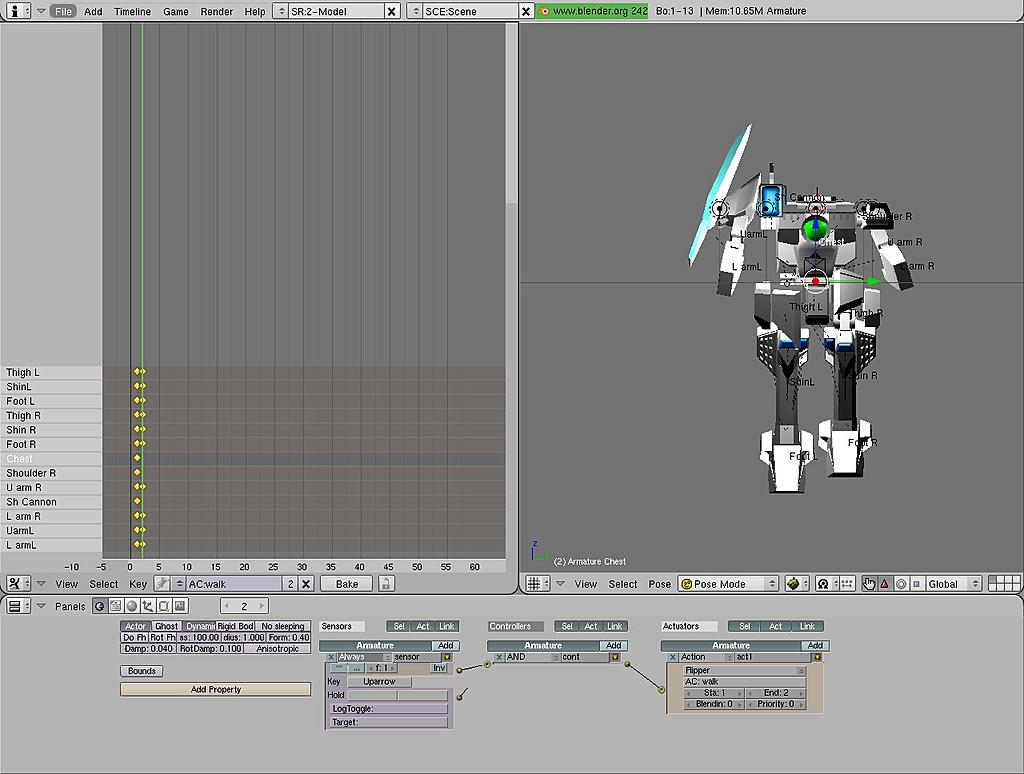 I am pretty good at game engine animation

First you have to set the action logic brick to “loop end” that plays the animation until you release the uparrow. An animation with just two frames will look kinda strange and very jumpy (but heck its a machine).

For the motion logic brick I would use loc not force, as force only works on a dynamic actor and with force it will constantly accellerate.

Hope that helped, PM me if you have any other questions.

P.S. how did you rig the robot, did you use vertex groups or envelopes?

I am a 3dsmax modeler and i model mechs alot. i already have a few i have made so if you need to view any of my work just pm me.