However, this is just vertices and edges. Is there a way to convert this into a 2D or 3D grid, like this?: I’m looking for some way to convert it to either 2D faces or 3D meshes. Something like converting the output of the Grease Pencil tool to 3D, only without doing it freehand. I was hoping I could somehow extrude a pipe or cube along my edges and vertices…

Someone I talked with suggested I use detect edges in the render settings. However, while Blender allows one to adjust the color of the rendered edges, it won’t allow you to adjsut the width… which is what I really need.

Perhaps I could somehow convert my vertices and edges into a format that would load into either Paint.Net or GIMP? Then I could edit it there. I’d even be willing to install Wings3D and, if possible, convert to a PostScript format or something.

You could extrude and move it slightly on all 3 axes. It would create some odd angles, but if you do it right it could still be essentially the same.

The attached image is a cube, with all the faces removed, and then the edges extruded, and then the faces created extruded as a region, to give it more dimension. I alos subdivided a couple times and did a subsurf modifier, to make it slightly smoother.

If you don’t need all 3 dimensions, it’s even easier, as you don’t have to try to move it three directions at once evenly, only 2. Constrain to Xand Y by hitting SHIFT+Z, then just drag it so that the other two match, more or less.

(Also, removed vert doubles, as this method created quite a few) 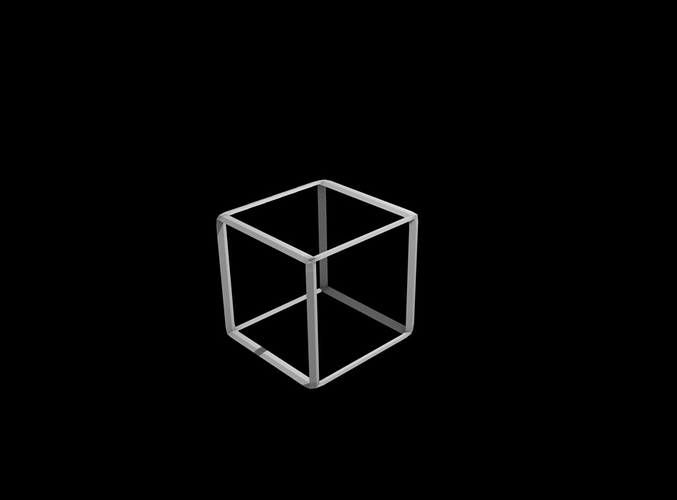 If you painted that with grasepencil you could try to convert it to bezier curves then add a BevOb and then convert it all to a mesh.

EDIT: Since you only have edges, you should extrude all of them upwards first to create some faces so the script will work.

Hmm. Have you tried enablign toon edges in the render panel? that might give you what you are looking for with much less stress, and you can increase the ‘rendered’ thickness of the edge using the edge settings button without otherwise altering the base mesh

And personally I try and stay away from bezier curves, I wind up with way to many faces. I’d just e extrude the edges, right click, then scale xy by about 1.025 using ‘individual centers’. that gives me flat faces I can then extrude along the z…

So i guess it is with extrude along path !