This one is called “Mandrill Rush”: 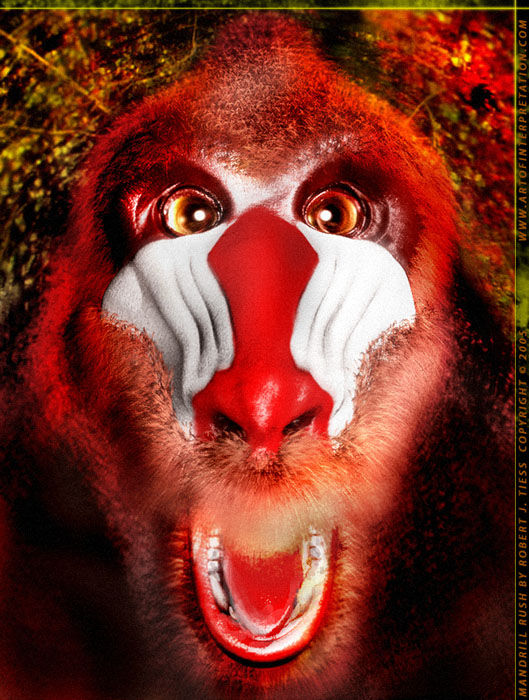 This was modeled and rendered in Blender 2.37a.

Only standard particles were used for the fur (probably about 300k hairs). After some quick LCSM, I used Zbrush simply to paint a quick color and spec map. Blender procedural textures were used for bump mapping.

Saturation and levels were adjusted in post, along with some slight DOF application and a faint duplicated layer of the image set to a radial blur to enhance the oncoming “rush” of the mandrill approaching an unwary photographer who may have gotten too close. Hairs and eyes were dodged and burnt in a few places as some finishing touches.

Eyes are actually two sets of spheres, with the outermost sphere for each set being transparent and refracting, but all reflecting. Eyes, like the hair particles, are on their own layer, and are illuminated individually. Eyes are lit by four horizontally opposing sun lamps (forming a t shape in top view). All lights are “layer only” types. Placing certain parts in different layers sometimes can lead to more interesting and customizable results for a scene

The fur is back and front lit by an omni ray lamp. Various portions of the head and basic body mesh were duplicated and used as particle emitters. These were duplicated several times, with a minimum of 30k particles per mesh portion, then stacked. Each mesh’s particle effect settings were varied slightly so the fur was more randomly and fully dispersed and a little more natural looking.

That’s amazing! Very well done! How long did it take to render?

wow robertt, almost photo real, would prefer to see a render from the angle you have on the top photo below.

really amazing work, some of the best eyes i have seen on any model. you are a machaine. if you were at the project orange, i would goof on you by calling you “robertt the machine” or somthing to that effect haha.

womball: Thanks! It took about a half hour to render.

Wu: Thanks so much for the positive comments, Wu. I’ve been investing an enormous amount of energy into these projects, so hopefully there’s been some improvements along the way. That’s why I’m grateful for any feedback I can get these days

The eyes look a bit too round for me, as well as the actual eye socket area. The shader work on the eyes is fantastic.

just beautiful, something i would have as a framed thing in the lounge room, that kinda thing =D just great!

Thanks BgDM and LohnC. I may try another render with this from a different angle (and maybe tweak the eye sockets). I’d also like to try this with the new hair system once that’s finalized.

?
How did I miss this one? perhaps because of Juanjavier’s bumping 50 other threads… :-?

Anyway,
love the symmetrical composition
love the eyes (he’s so crazy and cute

)
love the colors (so fricking dynamic!)

Don’t forget to take a break once in a while, you blendaholic.

?
How did I miss this one? perhaps because of Juanjavier’s bumping 50 other threads… :-?

Really impressive work, Robertt, the texture handling was astonishing…it seems real photorealistic!!! The lighting looks quite natural…and as for the hair and fur…did you use some sort of script, or maybe another technique?