Redone Annan harbour with many trees.
Links to zipfiles will removed as wordpad with the terms and details no longer seems to open using windows 10

The first main dock on the English side of the Solway Firth is Silloth. This is a revised version including many more trees and vessels.

Also this route has a scenario to rescue the crewman from the half submerged sailing-flat. For this you will require the drivable sailing-flat in the corner of the inner dock. Also I have included a very early drivable paddle steamer in front of it.

Certainly these forums don’t seem suitable to continue uploading free simulation/games. The 40 or so with real life terrain maritime routes made available for download from me are more than enough !

As this information is of a different type to previous I have started this thread. All my routes and content, images are free as mainly from my own photos. The only restrictions are use at your own risk. Not for commecial use including my routes, my content, my textures. I can’t seem to alter te heading to remove Download on WIP Maritime 5. Routes will need 2.79 or 2.79b to open the blend file. Maybe earlier versions will also work. You do not need to know how to use Blender but is required…

Actually there may be one more I am trying to make for myself.
60 km three or more river systems, Ribble, Mersey, Dee. 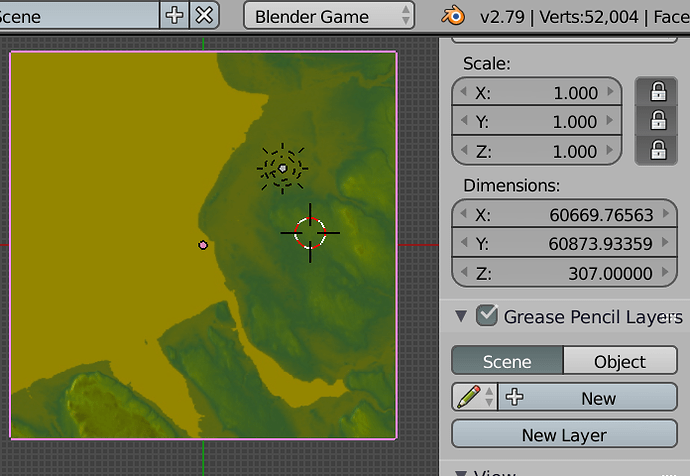 My best plan now is to regard the 40 or so downloadable routes as completed as unlikely to make more following around the coastline except maybe th 60 km size for myself.

However I will now return to the work in progress section and make the various stages of the 60 km as a zip file under 5 meg.
Obviously it is not about critique but about what is possible with 2.79b and making them free and available for others. Any critique of the 60km size routes will be totally ignored as obviously it is stretching the boundaries of 2.79b Blender.

Anything I make is not for commecial use, not for sale, and definitely only use at your own risk.

I won’t post further on the completed games/simulations but will probably update the 60km size scene of the work in progress section with downloadable 60km routes below 5 meg zip size and about 60 km square maritime route size. B

I have changed the method of making these route available for download and explained in the work in progress forum.
I am no longer using drivable and vessels willbe changed to run on preset routes, etc.
Start asgain with Annan, Solway Firth. This route already had the preset routes and animation made so added some more trees.

Use all routes at your own risk.
All details might be approximate.
Not for commercial use. B

Use all routes at your own risk.
All details might be approximate.
Not for commercial use.
I don’t think Blender seems suitable for making a number of preset ship tracks in one route. So route making paused.
B

The first part of the ‘completed’ routes is as follows.
B

P.S The descriptive page/s in the zip file will replace the readme page in future lists, as basics are repeated in the descriptve page. I will continue from Portreath as it has a harbour. if I make more but 15km to 20km as 35 km too large to be useful. This route is the first in the series with readme and descriptive page. Also no drivable vessels, no scenarios. Preset route in each. Portreath Cornwall. I find the preset route at least one in each route more interesting than previous metho…

After consideration I think I owe it to the past ages and bygone times to continue with the maritime coastal routes and maybe canals of the UK. Much of the past now seems obliterated with some churches pubs, inns, lighthouses, etc demolished or altered, also numerous old docks have now become marinas.
I am starting to go through the routes and adjust them as the next version. I might have to remake some to fit th 5 meg limit.
I have experimented with numeros methods with Blender. Several preset routes idea gets too complex. The simplest method is to continue as previously. So age of sail up to about 1815 (pretend) as docks, harbours and quays have altered many times across the decades. So these routes might include more recent quays and docks outside the era up to c1815.

Anyway that is what the series of routes is about so a better description might be ‘animated basic seascapes of the past ages’.

To be re-uploaded.
Starts from Solway Firth again with many hundreds of trees and with grass and sand textures in parts.
There is a drivable sailing-flat at Rockcliffe. tfgh. Use roaming camera, leave river, straight on untill you see a clump of trees.

Before Port Carlisle was built c1820 it was known as Fishers Cross, I have included some sloops, pretend fishing. wasd
Links to zipfiles will removed as wordpad with the terms and details no longer seems to open using windows 10

Back to Annan harbour in Scotland. Same as before but many more trees added.
Key 1 starts the movement of two vessels that cross each other in the channel leading to the Annan stone quays. The distant schooner is started with key 2.
key 3 starts the launch of the small sailing flat at the stone quay ramp.
Links to zipfiles will removed as wordpad with the terms and details no longer seems to open using windows 10

The first harbour on the Engish side of the Solway Firth is Silloth.
I have now included the Schooners. The drivable vessels are at the rear wall of the inner dock. There are 4 drivable different types

To rescue the crewman from the half submerged sailing flat only the sailing flat will recue him. Many static floating vessels have also been added,
Links to zipfiles will removed as wordpad with the terms and details no longer seems to open using windows 10 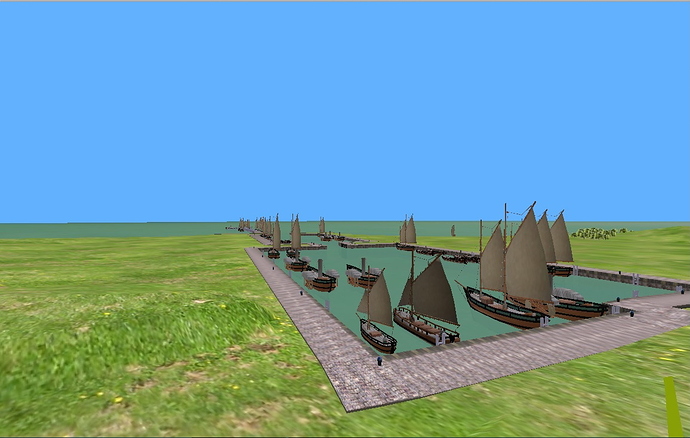 Maryport next version I have started work on.
I might put 4 drivable vessels into each routes.
I am trying to standardise the keys and will change them the same for each route,
wasd,tfgh, ijkl,zxcv
sloop, sailing-flat, schooner, early paddle steamer.
B

Next as we gradually move out of the Solway Firth.
Three seperate harbours in the one route.
3 drivable vessels placed in the first dock, corner of quay, bottom right.
The 3 harbours are Workington, Harrington, Whitehaven.
The screenshot show the 3 drivable vessels.

Workington is the top dock which has the 3 drivable vessels.
Harrington smaller dock in middle
Large dock at bottom is whitehaven. Deleted previous post as it would go nowhere.
However I thnk time to draw a line under sail rig vessels and look at steam-ships with screw-drive, small coastal.

The maximum route size will be below 5 meg zip, as with all the routes made so far and will only be using 2.79b for reasons explained previously. About 50 maritime routes made now, more or less. For download links refer to Maritime download pages 1 and 2.

Tricky part will be making the basic hull as not made any progress so far when trying the idea out.
If you don’t hear from me it means I can’t get started.

If I continue with steamships I think a change of scene is needed.
Maybe worldwide and listed in alphabetical order.
Maybe small size c15km.
20km would need decimate function.
A quick half hour example below of Gibraltar rock.
60 degree North is the limit for srtm2 but there are thousands of harbours worldwide that could be created.
B I remade Gibraltar at 15000 meters which is a better size for what I have in mind, rather than 20,000 meters. For now I will use the very early paddle steamer, at least it has a funnel. It will do until I try and make some steamships. Will add some quays and trees. to this route and make it the starting point for this new idea as I have all the world to explore. (smile).
Added 2 types of noise and bump map.
Adding photo textures all depends on final zip size which must be below 5 meg. Thanks Barry Due to thIS type of forum I won’t bother extending the range of maritime routes that I make based on other countries. I will keep to UK.

Made 50 or so and will concentrate on versions of what I have already made and available for download, on these pages 1 and 2 pages of ‘completed’ simulations/games.

I think it’s best for me to keep to a section of the range of routes I made stretching from perhaps ‘Ribble’ around to Barmouth. Changing the era also changes the whole route in turn.