masking without an alpha channel

I haven’t done much with materials and textures in Blender…

I have a black and white grid image and would like to know if it is possible to use the black part as the transparency?
Is this something that can be done with the material nodes? 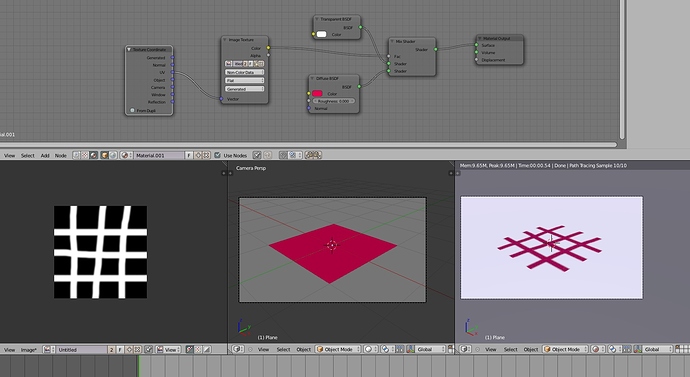 That’s excellent - thanks much for the quick response.

Trying to create the same node graph - but not sure what is the difference - I’m using 2.68 - texture coordinate node, and mix shader and the others are not available. Different version? There is texture and mix nodes, they are a bit different.

Never mind - I had the wrong node tree type selected.

Well, not sure what I did wrong. I have it set up the same as you presented. When I tried to render I would get an error: “No render output node in scene” - after some searching I turned off the Compositing option in the Post Processing section of the Render panel. That allowed it to render, but not the image expected. So in the compositing node tree window I added a render layer node and a composite node which didn’t help. I did notice in the image viewer for the selected image, with the “Generated” option selected in the Image Texture node, the image doesn’t appear, but a grid of grey and white squares appear with colored crosses in the middle of each.