Here’s my latest project, it’s meant to be a giant submarine that collects the bits from sunken ships and builds itself with them. Kind of like the Borg of the sea.
The scene was completed in about 2-3 days and has about one million polys at render time.
Some post-processing was done in Gimp to improve the image.
Thanks for looking! 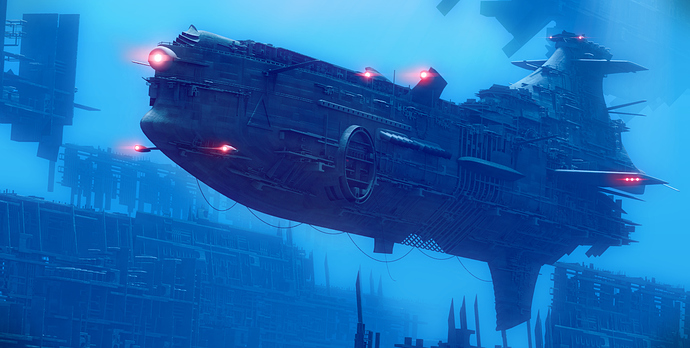 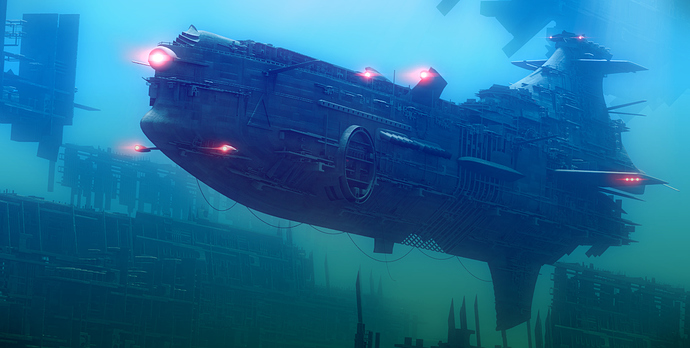 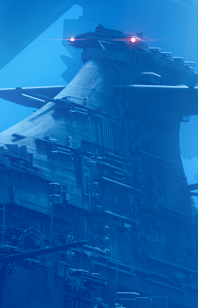 Really nice modelling - this is amongst the best concept art I’ve seen on BA. But - the thickness of the water needs an extra something. For example see this one: 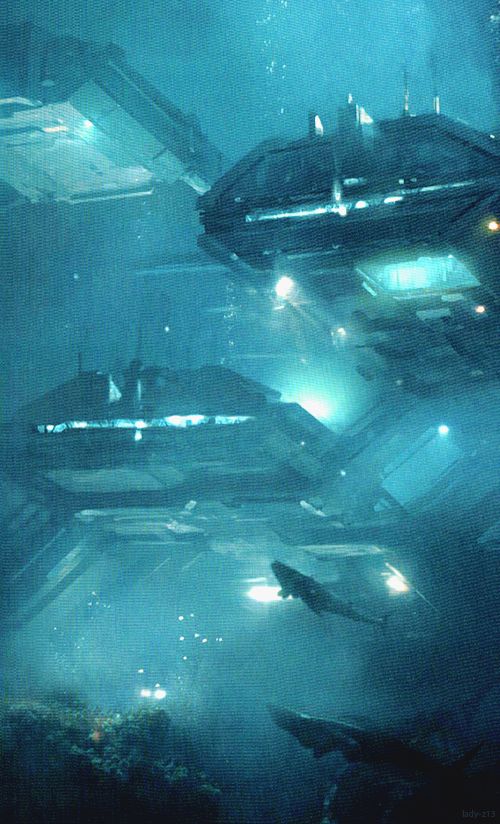 ME2 Concept Art - Arrival: “Arrival was originally set in an underwater base built by humans. Shepard was supposed to land on an ocean planet and take a submarine down to the main level. The idea at this stage was to give it a feel like the movie The...

The lights dissipate into the water around them a lot because the water has lots of tiny particles in it. Maybe you need a volume shader or could be done just with post processing (like a much stronger/wider lens flare mixed in with a low factor or something). I’m not sure. But anyway - it’s looking really good.

Edit: Also realised - it needs something for scale. It does feel massive and you have pulled that off, but a school of fish, or the hit of a whale disappearing behind the wreck - that sort of thing would really bring it home.

Yeah some volumetric lightning would be very benefitial for this image, also some wave-like-distortion because, it is an underwater image.

Really like the submarine, dude I have always wondered how can any1 get the patience to do something like this. I struggle so much with Sci-fi things, that I cant feel anything else than admiration to the guys that can pull off models like this.

Would love to see some constructive images :p.

Thanks guys, I tried to add a volumetric lighting effect with Gimp, how does this look? 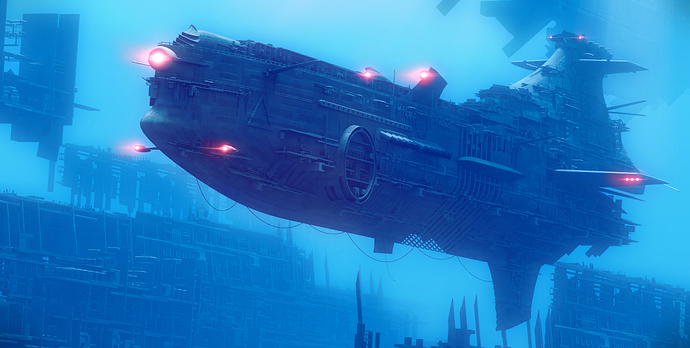 cant see it honestly, but let me help you quoting a tutorial from andrew price:

what will end adding this tutorial is something like this:
[ATTACH=CONFIG]304792[/ATTACH]

Very nice. I have to admit I prefer maybe the thumbail (sorry, just a feeling ;)). Anyway well done and waiting for your next improvements.

I like this very much, though I agree to the comments concerning scale and water absorption.

outstanding composition, great idea for a story, and terrific modeling. it is true that the water seems to be exceptionally pure, and the junior scientist in me notes that red light is absorbed very quickly in water (and thus glare from red lights would be unlikely) - but i’m completely willing to overlook those things for the awesomeness of the composition as a whole. if it was my project, i would probably try some colorizing gradients in gimp (like, leave the color the same at the top, but have it gradually become more brownish green toward the bottom) - easy to do as an overlay layer where you can mess with the opacity and layer mode until it’s just right. in any event, an outstanding piece!

really nice render, but the only thing bugs me is the loose cord instead put a pack of them.

wolfred, I took your advice about the gradient and I think it was a great idea, what do you think?

If you’re open to suggestions i think wolfred toughs are great, you should diminish the red lights and flares, add some volumetric light and some wave distortion !
Great concept and modeling

wolfred, I took your advice about the gradient and I think it was a great idea, what do you think?
[ATTACH=CONFIG]305131[/ATTACH]

It’s a very simple change, but I think it gives it a lot of punch.

I really like the new improvements - looking awesome. I just miss some fish and other particles in the water now.

This is probably the most awesome work I have seen to be made in Blender.

The Borg of the sea huh? I wonder how they announce themselves… creepy pings?