First, while I have some experience with modeling/rendering, I’m still new to Blender.

I’ve got a model of a plastic jar which contains black fluid. The jar is transparent Acrylic, the fluid is opaque (it is somewhat shiny, but this is not required), the lid is opaque white, and both the jar and the lid have labels. A typical product.
I have placed the jar on a simple plane that provides some reflection, however I’m running into two problems:
First: the label on the jar appears to have a reflection of itself inside the jar, as if it’s reflecting off the liquid inside.
Second: the liquid inside, and the lid, are opaque, but there is no shadow at all falling on the plane. It appears as if the entire object is being treated as transparent.

Before going into what may or may not be wrong with the materials/textures, I’m looking also to determine if the method of modeling I used to create the jar may be causing problems with the results. I created the jar, the lid, and the liquid separately, including “insides” for the lid and jar. The liquid itself is a duplicate of the inside of the jar, with the faces flipped. I’ve included a render with the areas in question marked. 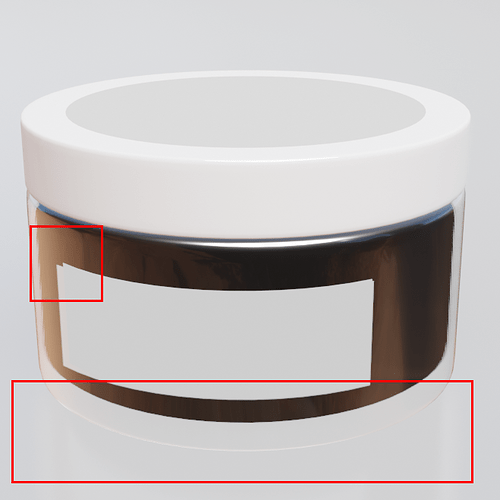 Specifics that might be relative to this: Using March-28th Blender 2.8 alpha release, and Eevee rendering.