So this is what I have for a rifle based on the X-B variant of the QF 2lb gun and I need some feedback. 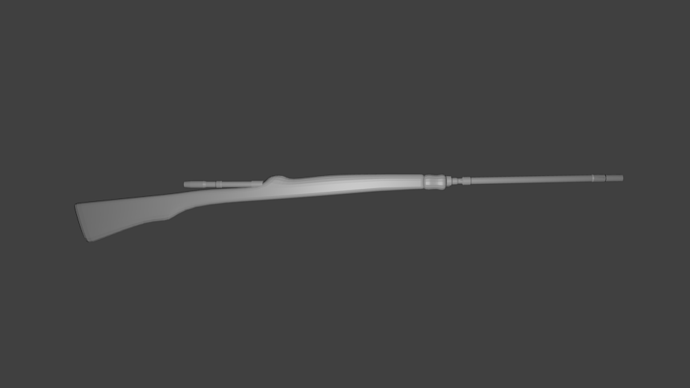 the rifle in the picture is actually a yugoslavian M48 but it was based off of the 98k. also the picture was use to get the basic idea of the stock and receiver of a bolt action rifle. the barrel looks different because its supposed to look like the barrel of a tank gun.

I assumed so (also M24 & M48), but there are not enough detailed images on wiki site (especially for the mechanisms). Had practiced/exercised with it and with few more when i was at the academy

So you’re making an iteration based on such rifles? What’s the story behind?
BTW
If being picky about it… (using such a long barrel) the expanding gas would make it problematic, heavy, hot & risky to operate, shoot with. Barrel should be a bit thicker at start and thinner toward the end, a bit conical.

You got the base blocked out. Now split into parts and start adding detail.

its for a game. im not sure at the moment because im still a noob at this.

I’m hoping to get more detail in but I am still stuck with some of those. (such as the trigger and the bolt action segment) and basically the story behind the rifle is that the model is supposed to represent the gun of a Matilda II infantry tank. or at least one of them. and I used a reference photo that I took to help me get the overall look of the gun.