Fornite like Genshin Impact are free with quality content and very regular updates, this means such games will always get lot of players. Only way to fail is to make changes that would make players move away.

Unreal backed by Tencent, new version 5 tech coming , beeing more and more used in movies virtual production, and big game companies using it, i really don’t think money would ever be an issue until they would make very bad choices or very bad management.
It’s triple A engine available for anyone, so there is nothing to complain about.

While i agree the Artstation price increase is a bad move, only thing to do is artists using it to be very loud so lot of chances Epic will listen and move back prices.

They are doing great challenging Steam and Apple pricings, but that Artstation price looks like a contrary action.

Not really, Chinese people just want their players to play lot less and be more active, they are more agressive against own companies making games for their players.

So a Chinese game company making games for other countries outside of China, i don’t think those will get any impact.

Also Tencent is really not about gaming only, or it’s sub companies using Unreal for many things oustide of gaming, also owning Epic means their benefits will also benefit Tencent.
Tencent has almost no impact about actions against Chinese companies making games for chinese players.

Anyway somewhat out of Zbrush subject.

Just think, being as Blender is fully open source. A group of users who came over from Z-brush say 50 or 100 or more could actually pay the same money as they would for Z-brush subscription but pay for a full time developer of their own, to work on a Blender Sculpt branch… Right?? Could that ever happen?

A post was split to a new topic: 3D-Coat as a companion to Blender

I bought zbrush several years ago, and must say that I’m very happy I did. The workflow is so much faster. I’m curious what upgrades will cost in the future. It might or might not be worth it, we’ll see.

A group of users who came over from Z-brush say 50 or 100 or more could actually pay the same money as they would for Z-brush subscription but pay for a full time developer of their own, to work on a Blender Sculpt branch… Right?? Could that ever happen?

There are two issues:

(* And Blender likely never will have a good way to save and reuse brushes/alphas/textures. The asset browser may one day be able to hold brushes, but it sounds like there are no plans to enable users to save data from their current file, to the asset browser or to any of the files used by the asset browser, so even just saving brushes for re-use in other files will always be inconvenient.)

For those who might be interested: I’ve split my 3D-Coat rediscovery report into a separate topic ( Cc: @carlosan ).

3D-Coat as a companion to Blender Blender and CG Discussions

[Moved from a thread about Maxon having taken over Pixologic…] Keep us posted… I’ve spent all day rediscovering 3D-Coat yesterday, and I must say I quite like it so far. Some things have been improved since I used version 4.9, such as the brush engine and some UI elements, and the feel of brushing seems to have improved. Going to watch around 50 more video tutorials and experiment some more today, then I’m going to try the 3D-Coat applink for Blender. I’ll keep you posted. …

As formal online statements like license conditions have already been changed to Maxon conditions, that implicates that the takeover deal has been completed and/or the regulatory approval won’t be an obstacle anymore. In that case, Maxon or Pixologic should already be able to release details to the ZBrush users.

I always find it irritating when a merger like this happens, and the smaller company maintains that nothing will change, and then it does inevitably. It just feels dishonest, even though I understand that the politics of the situation make it impossible to be any other way…but still.

Impossible? If they really wanted to, they could just state ‘We can not give you all the details yet. Time will tell.’

CGSociety reports that Maxon has already taken the first step towards moving ZBrush users to a subscription-based system.
CGSociety

Usually when an acquisition occurs, the big company at least waits until the ink dries and a major release is done before announcing changes in the business model and/or the pricing of the acquired product (so as to ensure the initial shock is gone). Maxon may be making a huge mistake in their impatience to completely dissolve the Pixologic name.

Thank you for the link.

Although I feel that ( … initial shock …) as used in this case might be a bit of an understatement, especially the longer this all drags out.

To clarify. From what I am reading it looks like a new perpetual only offers a year of critical bug fixes rather than actual feature updates. So it is hard not to see it as a real de valuation of perpetuals which will make owning them feel a bit like being a lower class and less valued level of user / customer. If this really is how it is going to play out then it seems unnecessarily harsh and very mean spirited to me. Why not offer fair priced yearly upgrades and include a year of updates ? But it also it could be interpreted as a tactic in which to push perpetual owners onto subscription. This could be both very impractical and, or financially unrealistic for very many I would think at the sort of prices we have seen.

Still hoping there will not be a need for anyone to deploy the Charlton Heston and Statue of Liberty meme. Perhaps we will still be calmed and pleasantly surprised by the eventual outcome. We have had no full offical announcment on any of this yet and I don’t like to end posts on a negative note.

Why not offer fair priced yearly upgrades and include a year of updates ? But it also it could be interpreted as a tactic in which to push perpetual owners onto subscription.

I’m afraid so too, because if perpetual license + yearly upgrades = considerably cheaper than a subscription, then subscriptions will not take off.

Anyway, in the mean time I’m much enjoying my rediscovery of 3D-Coat.

I’ve been reading everything, and it’s not much more than a lot of mutual congratulation and a summary of everything we already knew. And the one thing that I eagerly awaited: an announcement about the upgrade pricing for perpetual licenses is not announced yet…

“How much will perpetual upgrades cost? Will it be possible to convert from a perpetual license to a subscription?
More details will come at a later date. However, providing value is and has been a primary philosophy of both Maxon and ZBrush that will continue as we move into the future.”

“What is the future of ZBrush integration with KeyShot?
KeyShot is a valued ZBrush partner, and the current integration will continue for the immediate future.”

Roughly translated: “Keyshot will remain in the picture until we’ve made a ZBrush to Redshift bridge.”

So many words in there but so much boilerplate. Well I liked these two sentences

Maxon is fully committed to continuing development on ZBrush under the continuing leadership of Ofer Alon.

Thank you so much for posting this. The key part most will perhaps want to read tucked away inside all of that is here I think.

Will there still be free upgrades for ZBrush perpetual license holders?

Moving forward, perpetual licenses will only receive bug fixes, but not additional features or functionality for free. Subscribers will receive all feature updates and other fixes as long as their subscription is active.

And the one thing that I eagerly awaited: an announcement about the upgrade pricing for perpetual licenses is not announced yet…

But you know the cost of a subscription

Sounds for now at least very much like if you don’t want to be left out you need to always be on subscription. Also to me the general emphasis seems very much focused throughout on the big movies and games big business side of Zbrush. Rather than also focusing on it’s exceptional and incredibly large and diverse user base community built up over so many years. Right now it’s looking to be a very dramatic change of tone and culture for sure.

Lots more thoughts but too worn out right now with worrying about all of this and said quite lot already. I’m ging to focus for a bit on leaning more about Blender Grease Pencil.

All the best to everyone.

It sounds like Maxon are only too aware that they should ‘NOT F**K WITH ZBRUSH’ or bear the wrath of the entire industry.

It would be like Banksy buying a Caravaggio and then painting over it, it would be a crime of the highest order.

I have a feeling that Maxon will allow the Pixo team to continue their work uninterrupted and with full creative control. Zbrush is too legendary and admired across the board to mess up in any way.

As far as I can see, it will be business as usual, but with pricing increases, and additional resources that Pixo team can draw on. Dare I say it…

This is exactly how the Allegorithmic sale to Adobe turned out, and it’s been far from the disaster everyone(including myself) heralded at the time.

This is just speculation, but this line of thinking may or may not imply that Maxon will add always-online DRM and forced updating to ZBrush as well (in the name of efficiency in feedback and in bug reporting).

If so, the ZBrush brand will get the full corporate treatment and make Adobe look generous in what they are doing with Substance and friends (because the latter at least kept the indie licensing and expanded the concept to more areas).

There are no announcements from Maxon or Pixologic yet, but a listing on the reseller site shows the cost of upgrading to Zbrush 2022. 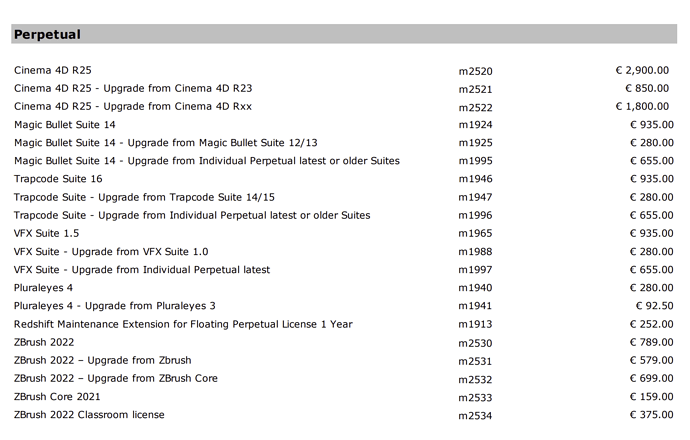