I could sculpt long sessions without bugs neither application restart,

My computer pretty much runs 24/7 and I will often have the same session of Zbrush running for days at a time.

Wow, that is even more than the $500us upgrade price I predicted in an earlier post. Maxon will be sure to pull out all their tactics to drive people onto subscription and dissuade perpetuals. This is sure to go down well.

The cost of the Zbrush 2022 upgrade was also listed on other reseller sites. If they don’t intend to slander Maxon, this price seems pretty accurate. 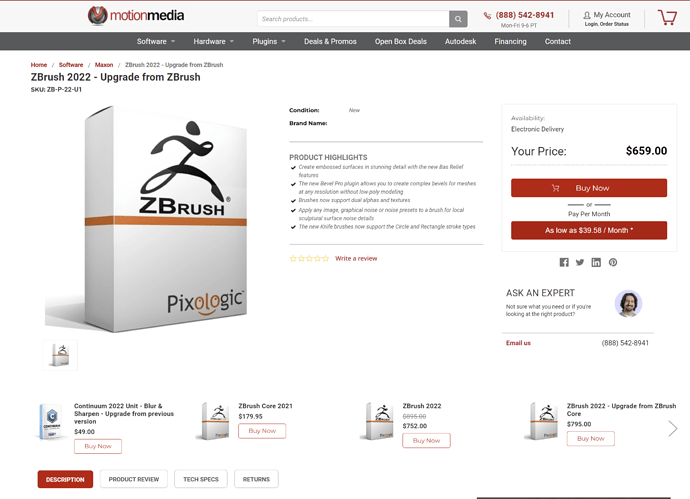 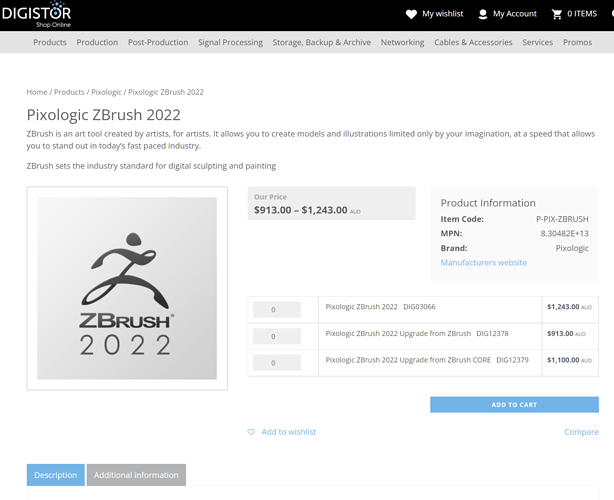 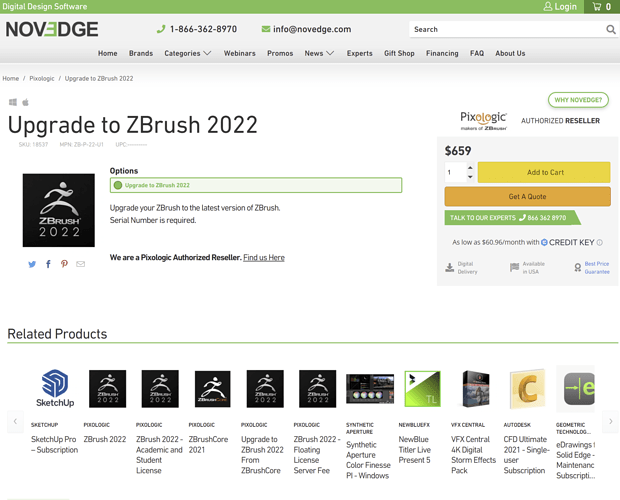 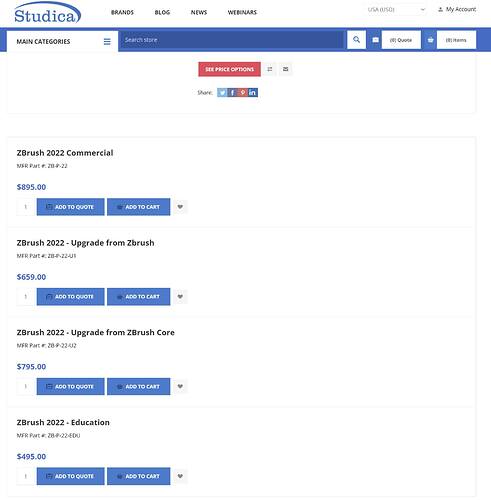 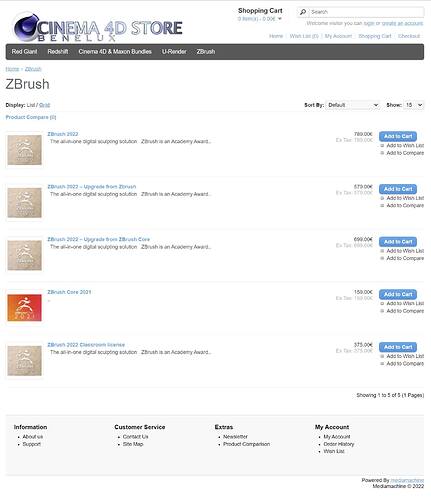 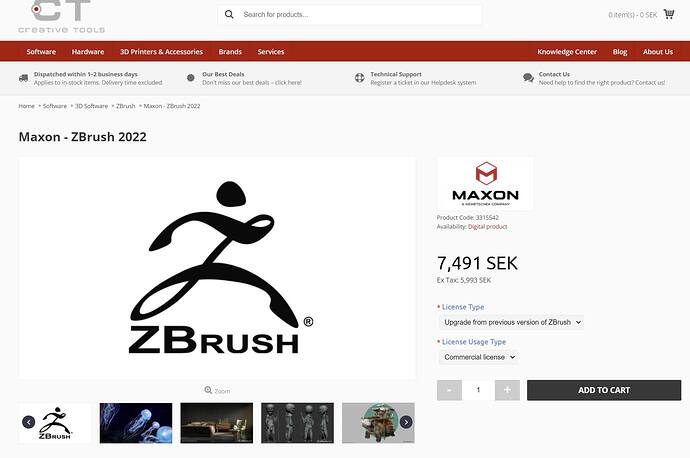 Trying very hard to filter out all the emotion and look at this from a distance and thinking it is simply quite staggering how badly all of this is being handled. There has been no real attempt at all to reach out to the user community or build any kind of bridges as I saw in past examples like this.

These are difficult uncertain times for so many anyway. Dedicated users and all those that have come now to depend on this software for so much of what they do are still having to scratch around here there and everywhere for the slightest scrap of info or rumours.

( Sorry … I thought it was best to edit this down )

The Zbrush Core version’s future too is looking very pale with all those recent developments. Pixologic was neglecting its development recently. Now that Maxon bought Zbrush it will stop definitively maybe.

The Core version of Zbrush was a good solution for those who can not afford the money amount to buy the full version. Now all those people who bought it do feel betrayed somehow.

There is a lesson, however , to be tought from all those news: Someone should never rely on a single app.

Someone should never rely on a single app.

Agreed. As I think this also applies to Blender, I’m enjoying my rediscovery of 3D-Coat. It’s a great companion to Blender, particularly with the App Link add-on.

And no, I’m not affiliated with Pilgway in any way, just excited.

I need to try zbrush core or 3D coat at some point just to have a larger background in sculpting. Maybe its so much better that i switch but i doubt it and textures are made in substance…

Private equity-led deal to unite developers of three of arch viz's most popular renderers. All of both firms' products remain available.

I too have bought a previous version of 3D Coat. It is a great app indeed. It is worth devoting some time to learn its use. It has a very rich toolset. Especially for sculpting and texturing. It is as having a vast part of Zbrush and nearly the whole of Substance Painter. Both of them in an approachable, as to its price, app!

It is what is doing many applications, but it can worth it.
I mean many neww features i think i don’t need and i could skip one or more years updates.

For example you buy Substance Designer 2022 license with one year updates, you got all essential features and more.
No need to upgrade next year if there is not a groundbreaking feature.

For example i paid 3D coat for one year upgrades, i’m almost sure i won’t buy upgrades during at least one year, or it should get an incredible feature to justify yo pay another year upgrades.

So same thing for Zbrush i would say, because not all artists will pay each year upgrades when they got all features they really need.

I too have bought a previous version of 3D Coat. It is a great app indeed

Save often, because it’s easy to get it closing sometimes and have the bug report dialogbox

No need to upgrade newt year if there is not a groundbreaking feature.

That usually doesn’t work because most companies charge more for the upgrade if you had skipped upgrade.

Some program like Houdini doesn’t even have “upgrade”. You have to be on yearly maintenance. If you are off, you need to buy a full license again.

That usually doesn’t work because most companies charge more for the upgrade if you had skipped upgrade.

Yes this can be the issue about upgrades.

Substance Painter 2022 is around 150$ license for one year upgrades. The price is more tailored to decide per year if you buy or not the app again.

Zbrush 650$ upgrade is really too high, while i don’t think there is any Zbrush ground breaking features announced under Maxon (no rigging or animation directly in Zbrush i mean or totally new interface).

3D artists needing high level of detail sculptings will have no other choice than stay with Zbrush, so they will pay prices Maxon asks.
Zbrush fast speed sculpting on high resolution keeps it as sculpting leader tool, until some other app would figure out a way to get such high speed using any tricks or new rendering techniques.

This, so much. SubD/Multires with the performance and stability of ZBrush is what makes or breaks alternatives. It is what allows the best shape control in any tool I ever used.

The problem is that Maxon is known for penalizing users that don’t upgrade each year. For each year that you miss, your upgrade becomes more expensive and if you miss more than 2 years, then you have to buy a new license. I can’t say for sure that they will be this with Zbrush, but it is very likely.

Yes, exactly! I used C4D from R8 all the way up till R20 and upgraded each year. When the licensing turned into the “Maxon Service Agreement”, it was basically a subscription by proxy. You felt trapped into upgrading even if they were minuscule updates.

I was using it professionally, so the costs weren’t a big deal, but you still felt shafted by the scheme. Zbrush owners will come to know this business practice in coming years! Users would be best to do offline activations for Zbrush on their main 2 pc’s and have this all backed up locally (unless they are willing to get on the upgrade or subscription treadmill). I think Maxon will switch to their own license activation system soon, as you can see how fast things are changing.

Users would be best to do offline activations for Zbrush on their main 2 pc’s and have this all backed up locally (unless they are willing to get on the upgrade or subscription treadmill). I think Maxon will switch to their own license activation system soon, as you can see how fast things are changing.

I don’t think we have to worry about this until the next version. ZBrush doesn’t have auto updates and they’re going to have to support activating the old perpetuals. Next minor or major update watch out though.

That is why I am suggesting that people delete their current activations (assuming they were done in the standard online way). Then do offline activations for the current version and back these activation files up. You then at least have your own keys for the immediate future and can reinstall on these 2 machines if needed. Of course these are node locked, so you can’t put it on any other machines in the future.

My guess is that there will be a minor update in the near future purely for the sake of rebranding zbrush with the Maxon logo. No doubt this will need to be activated on the Maxon servers with a new login system. This may or may not require a weekly “call home” to Maxon servers or it won’t open up. If people haven’t got their own keys before this stage they will then be trapped in the new system.

Sorry for a dumb questions, but, if a Zbrush user was to cancel their subscription, move to Blender but allot the same money each year in payments for new powerful hardware, would that make up for the large performance difference? ignoring all the missing features which Blender will hopefully gradually acquire. And isn’t it safe to say that if a Z-brush user chose to keep paying, that their budget for new hardware would be much more limited?

And to add to that i think its important to note that we are now back in an era of substantial performance uplifts on the CPU front with each new generation now from AMD, Intel and others, Zen 4 for example is touting a 40% uplift over Zen3.

Too many variables to answer.

Imho, Blender, for the foreseable future can’t substitute ZBrush for what it does and how it does it, specially in a production environment, no matter the hardware.
At least, not as a blanket solution.