im making this rig as part of a bigger rig but i just cant for the life of me figure out how to get it working the way i want it to, i got the constraints and everything working by themselves but i dont know how i would go about making the whole thing move correctly. i wont waste time trying to write down what im trying to do as it would probably not be possible to understand. iwe added a picture of my rig and a few visuals instead. im thinking i need to use IK in order to do it but i just dont know where to start. im kindof a noob in modelling as i started only a few months ago and this is the most complex rig iwe attempted this far. any help would be greatly appriciated:yes:

Edit: should i upload my .blend file? Some mesh stuff is parented and some is not 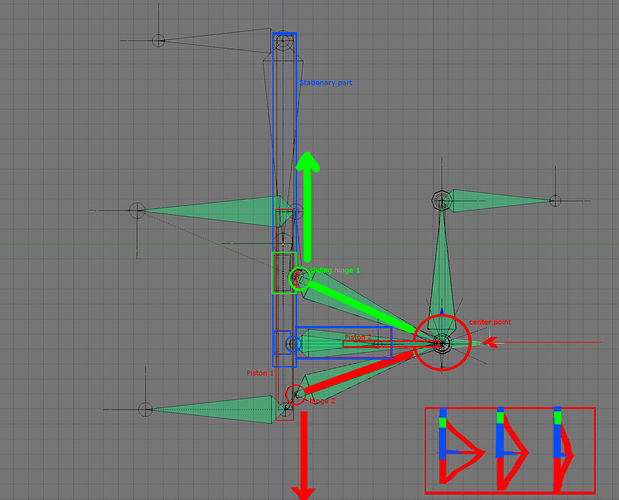 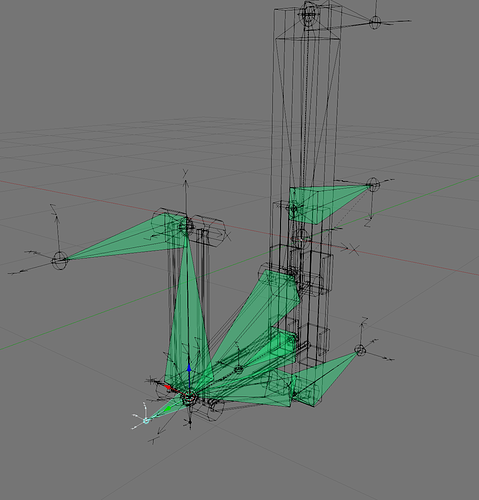 EDIT: Seems that every post i make has to be reviewed by a moderator. So there is a delay responding… Ill soon include a pic of the concept im modelling from. And my .blend file tho its a messy thing i just mocked up quickly to test things out. Im for now using the center point as my driver tho the bottom piston could also be used as a driver for its intended use. This is a vertical attacement for a landing gear. The gear itself will rotate with the two bars coming up from the centerpoint.

here is an approximate gif of what im trying to do(only to the first joint, and with a center piston, rather than only one sliding point both hinges will slide away from the piston in the center): Here is my blender file. for the newest rig experiment
Edit: Re-added it here
https://drive.google.com/file/d/0B9yFzV-G4YPzSWhDSTdGWmMzNVE/edit?usp=sharing

and here is an earlier incomplete mesh i made as a mockup for the whole assembly, will start over on this one as i just made it for practice without rigging in mind. This is not the intended “rest pose” for the rig. The rest pose would be with the leg part of the gear closer to the base. Also ignore the positions of the pistons and hinges here as they are not in the correct scale and positions. And the base would be “attaced” to the vertical truss there. The thing on the top is also intended to be part of the rig, The 4 pistons will adjust the position of the top of the gear. This mesh is missing some stuff. Im not sure if i will have the “leg” extend in some way at all but it will probably have some “springiness”(for the game its going into means that it will need to be seperated into objects where the springing accurs, and parented accordingly) o and the “wheels” at the top there is where the top pivot and attacement for the leg is supposed to be. Edit: should i upload my .blend file?

Yes, that would help. You haven’t said which bone should be the driver: from your depiction I would guess that you want to move the centre point in and out and have everything else follow accordingly, but the name ‘Landinggear’ suggests that perhaps you want instead to control the motion via the vertical position of the lowest bone. A picture of a real example of the sort of thing you are modelling might also help.

O sorry ill upload it asap when im back in front of the computer. Yes the centerpoint is the intended driver for this part of the rig.

Edit: but the bottom of the big piston could also be made the driver for the entire rig (that would make things more workable later once i add the rest of the rig so everything moves into place when i pull down on it)
I added some more pics and an example to the op

Edit: ok now the op is back.
my .blend file
https://drive.google.com/file/d/0B9yFzV-G4YPzSWhDSTdGWmMzNVE/edit?usp=sharing

Edit:
Made some progress with a hacky inverse kinematics rig for just the “half scissoring thing” (dunno how to describe it). But its still not sliding out completly along the vertical line the way i want it to. Ill upload the pics and the .blend file of the new test rig asap.

and here it is:
as you can see it moves in the correct way but the base of the two hinges are not following the vertical line
Pic1: and the blend file. sorry for my noobness in advance:-P
https://drive.google.com/file/d/0B9yFzV-G4YPzVElDTFVVUS1ScE0/edit?usp=sharing

as am waiting for some tips i kept working on my hacked sollution in the mean time and got it almost there with the use of constraints and combining IK with FK, the driver is now called “Armature_Driver”, hoping for a more simple sollution to this. my hope was that i could lock the two hinges to the two paths i created, but as of now i cant figure out how to do that. Ok. Seems im not going to get an answer here. Sorry if im terrible at explaining or what im trying to do is very complicated. I finally solved the issue myself tho my approach seems really overcomplicated and causes a lot of cpu overhead when moving the pose quickly. I basically made some ik driver bones initialize the rotation then used the damped track constraint+limit y location on seperate bones to get them moving along the edge. I also figured out how to use the clamp to constraint but i ended up not using it. There is now no unwanted jerking or horizontal movement of the mounts and the two hinges move away from eachother along the edge while the cylinder compresses. I am marking this as solved even tho i will probably learn a better way of doing it later.