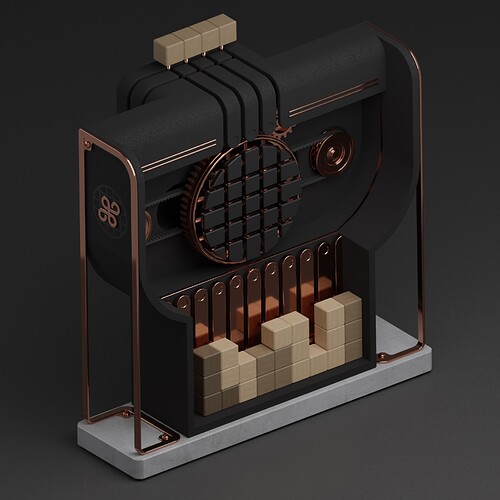 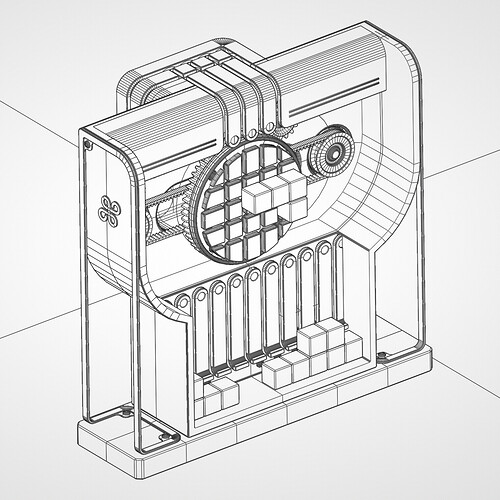 Inspiration
This is a mechanical homage to the classic and much loved video/arcade game, Tetris. I’m now the proud owner of a beautiful arcade machine from Bitcade, and my wife and I have been enjoying it very much. We’ve become a little addicted to Micro Machines and a Tetris-like game called Maniac Square. Having access to classic games and my general love for 80s/90s culture was certainly the catalyst for this project.

Styling
I’ve returned to my favourite materials, copper and wood, to revive a style that I’d used in some earlier projects. Rather than using plastics, I like the idea of using materials that would drive up the cost of production. This wouldn’t be commercially viable (ignoring that it may not be technically feasible), but making this in 3D gives me the freedom to explore the aesthetic.

Hardware
This is the first project I’d created with my M1 Mac, and I wasn’t disappointed. The compute power allowed me to quickly test materials, run the animation at the intended frame rate in the viewport without lagging and render times were significantly shorter. Previous animations I’ve made on older machines were generally around 200-400 frames in length, and would take many hours to render. This project used over 1200. Ok, so this still took a few hours…but the alternative would have been days.

TLDR: I made a looping animation of mechanical Tetris using an M1 MacBook.

Another one great stuff.

Wow, that’s great. I was so astonished, when I noticed, that the animation loops! How long did it take you to find a sequence of stones that loop? Again… Great work!

I was sketching for a couple of hours and had a basic setup in Illustrator too. There are probably some more intelligent solutions to this, but it really was a case of trial and error. 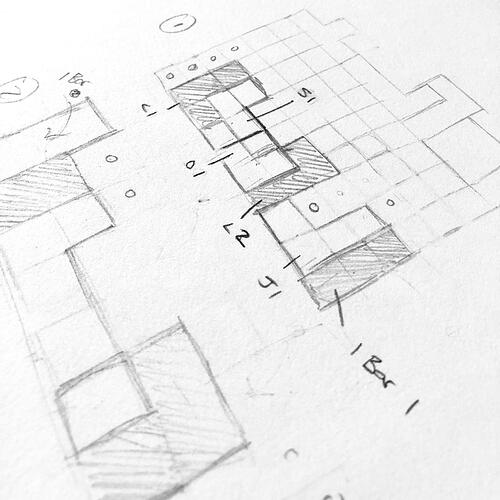 This is incredibly fascinating! I want one!

Thanks! Yes, me too…although I think if this existed (not technically feasible), it would quickly drive me mad.

You do know, of course, that if you could physically manufacture such a thing, you would make a fortune …

Really, the only thing that’s missing is whatever determines the next arrangement of wooden cubes that is to be pushed onto the slider . . . shouldn’t be too hard to design such a thing . . . (?)

Hopefully there would be a way to do this without a computer so it doesn’t ruin the steampunk vibes.

Another component that may be difficult to design would be the thing that decides when to clamp the pieces in place, with a correct pivot point based on the shape of the piece.

This is really smart, some nice details in the mechanism part too.

I very much adopt an “out of sight, out of mind” methodology in my work

It’s probably a little lazy of me to have overlooked all the technicalities (visible or otherwise), but there’s only so much I can do before going a little insane…for a personal project too!

Part of me hopes that someone will try making something like this though, for real.

There’s a lot of smoke and mirrors in this project (not literally), but I think it’s got the vibe I wanted.