I watched this movie a while back, and just watched it again today. If you’re into campy movies, Ed Wood, Uwe Boll or just B-Movies in general, you have to see it. It’s pretty much the apex of bad film making, but in the best possible way. Every aspect of the film - the acting, sets, effects, music, dialogue and even the editing - has that special “so bad it’s good” level of awesome to it.

The best part about this movie, tho, is that they set it up for a sequel in the end. Dear lord, I hope they turn it into a trilogy. That would be awesome.

For a little serious information, tho, “The Asylum” is a production company known for it’s low-budget rip-off versions of popular films. For instance, they made and released “Transmorphers” and “Transmorphers: Fall of Man” to coincide with the two Transformers releases. The covers of those two films looked similar to the transformers posters and images. They’ve been sued for copyright violations when their cover images have strayed too close to the source material.

Their films are hit or miss, but most of them are really entertaining if you’re into the crap movies. It’s pretty shameless what they do, but I’ve actually preferred their versions of some of these films over the big-budget bombs they were ripping off. You can see it as cashing in on a well-known movie or possibly satire or something… I dunno. I think Megashark is one of their rare original-idea titles, as I can’t think of anything recent that it could be ripping off…

Bottom line: If you get a chance, rent it. A video store in my area had (had, as in I bought them all) three copies of it used for $5 each. Go buy or rent it, get a few buddies and a few beers and enjoy 90 or so minutes of pure entertainment. 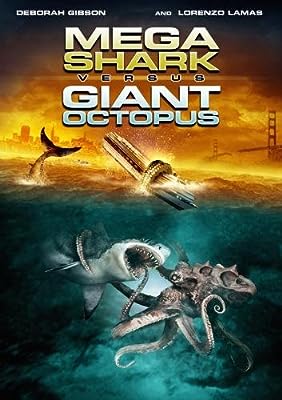 The California coast is terrorized by two enormous prehistoric sea creatures as they battle each other for supremacy of the sea. When sold by Amazon.com, this product will be manufactured on demand us ...

There was a good documentary last night on prehistoric sharks who ate (in scientists theory anyways) whales. They are called mega something rather. It was cool to watch.

Oh God, this looks like a riot. My son and I (my wife usually retires to the bedroom to read) reserve Saturday nights for the Sci-Fi Channel (now known as SyFy) movies. This fits right in.

Speaking of crappy knockoff movies, I’d like to find a copy of “Battle Beyond The Stars”…