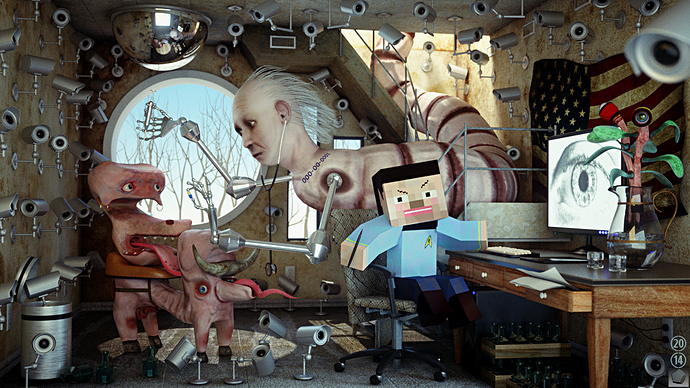 This is interesting… I think good!

really cool and funny. i like that one camera pointing at me…

Wow, this is amazing. I love it, so imaginative. And lots of cool little details.

Actually this is genius, I really really enjoy it.

ps: a little of post process in Blender or Photoshop could be a plus.

Thanks for the kind comments everyone, as always very much appreciated

very cool. Maybe not every part is technically 100% ultra-photo-real… but the piece itself is 1000% more creative and interesting than most photo-real renderings I see. When I look at this I get to see something new. When people do technically perfect renderings of real objects… all I get to see is slightly imperfect copy of something that already exists. Great stuff, thank you for posting.

great,nice to see such creative out of the usual work.

Agreed with Kemmler - it’s refreshing to see something creative as opposed to another render of a car or arch-viz or anything that is more of a tech demo (no disrespect to different skills required for those of course, it’s just personal preference).

I will admit I don’t know what the minecraft thing is about, so that has gone right over my head. Only criticisms would be that perhaps the composition is a little chaotic, I suspect that might actually be deliberate as a way to emphasise the oppressive feeling of surveillance? However, I also suspect that there is still some scope for a bit of order (be that angles, curves, grouped objets etc etc) that makes it a little more aesthetically pleasing whilst maintaining any feeling of being overwhelmed.

When I look at this I get to see something new. When people do technically perfect renderings of real objects… all I get to see is slightly imperfect copy of something that already exists.

Absolutely agree with you, like Einstein said, “Imagination is more important than knowledge.”

nice, but it scares me a little xD.