I register this topic here, because this optimization has only to do with modeling (not rendering or animating, etc)

My scene is growing larger and larger. I am rendering an interior space, now consisting of 60 objects with a total of 675K faces. Most faces are from complicated furniture objects. I started, getting lags in moving objects and paning views and sometimes I can hear my disk caching.

I separated the walls and space outlines from the furniture, into different layers - so I can set my camera views quickly paning with only the walls. Then I grouped the furniture by their locations in the layout so I can view them separately, by lots, according to scope of view.
These seem to have helped significantly, but since I am new to Blender I am not sure I am doing the right thing or the best I could, for this issue.

Finally, any suggestions on optimization are very welcome.

Forget about CAD when working with Blender (or any software dealing with polygonal modeling). I’ve already suggested that in another thread but here it is again since it’s no joke.

Animation is usually split to many shots, large scenes are separated to asset files (furniture, plants, house, environment, whatever) and a scene file for each shot where those assets are linked in and rendered. Check out linking objects, proxies (basic manipulation of linked objects) and http://cgcookie.com/blender/2013/07/16/using-edit-linked-library-add-on-blender/ if interested.

Show your scene with clear wireframes (object properties -> display -> wire, draw all edges) and what modifiers are in use. Turn off subdivision surface modifier visibility if you have one (or use scene simplify option to do that for everything) for that.
I’m guessing you can shave off quite a lot of unnecessary geometry by using actual instances but there might also be some things you could do with how objects are modeled. 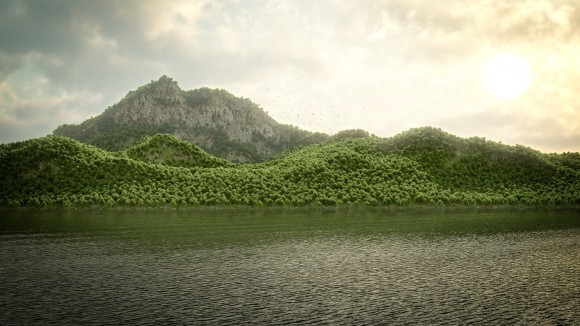 Using instancing, Agus3D created this image containing 19 billion (19 000 000 000) triangles. The kicker? The scene used only 200MB of memory and required 40 minutes to render in Cycles. The .blend file is available, so go try it for yourself! Agus3D...

Review your modifiers. Mainly any subsurface modifiers you happen to be using. This modifier is special in the fact that is has two settings. One resolution for the viewport and one for rendering. You can lower the viewport setting to 0 and leave the render setting quite high. The Simplify option (under Scene context) also allows you to globally reduce subsurface viewport resolution.

Layers are a valid way to accomplish your goal. But you can also use the icons in the Outliner to remove an object from the viewport while still keeping it in the render output. With layers you can forget to turn them back on when rendering. If you have a heavy object that you are “done” with you can turn off it’s viewport visibility to regain performance.

You can also explicitly set any object to display in bounding box mode. Once you are done working on an object change it’s viewport display to Bounds.

Thank you both, to the point, very helpful.

From the Wiki Manual: “A common table has a top and four legs. Model one leg, and then make linked duplicates three times for each of the remaining legs. If you later make a change to the mesh, all the legs will still match. Linked duplicates also apply to a set of drinking glasses, wheels on a car… anywhere there is repetition or symmetry.”

Question: I could do one leg and modify>mirror it in both X, Y to get 4 for the table. This would have the added advantage of all legs automatically recentering if I move the parent (in addition to editting one for all). Which consumes more resources (linked duplicate or modifier)? other reasons to use the one or other method?