I am keen on modelling a level-4 Menger Sponge (http://en.wikipedia.org/wiki/Menger_sponge)

This was a fun challenge :). I’ve been trying to do this with a bunch of array modifiers applied to a single cube. This way you can modify the initial cube and all cubes in your sponge will update. It took me a while to come up with this setup but I finally got it. I’ve attached a screenshot and my blend file. If you want to use this for 3D printing you need to clean up after you apply all modifiers. There are faces inside the structure that you don’t need. 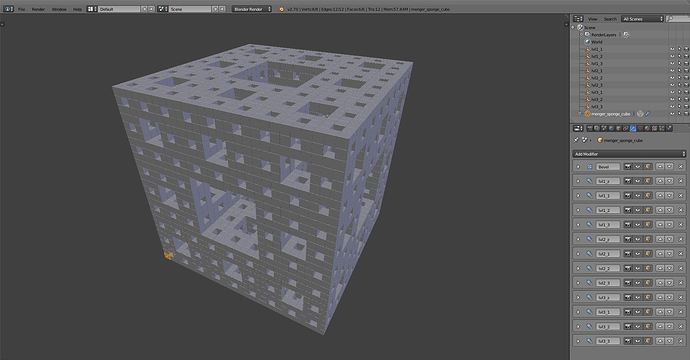 I wanted to give a try with booleans to see if it could make it easy.
And i struggled a lot more than i thought simply because Blender booleans are really bad.

Anyways, here’s what i did : 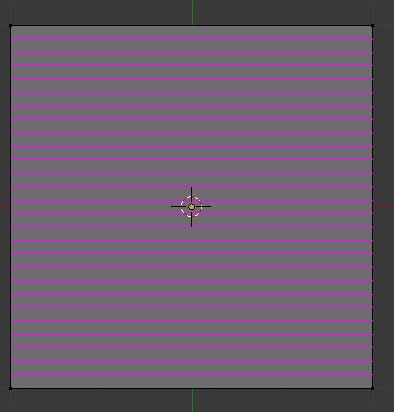 Then add 26 loops cuts on the other axis 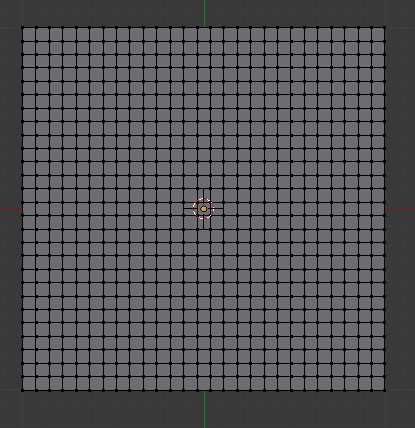 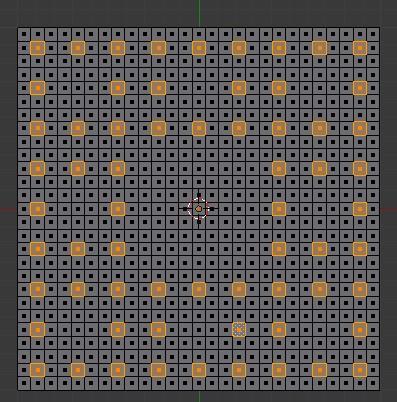 Select those faces and delete them 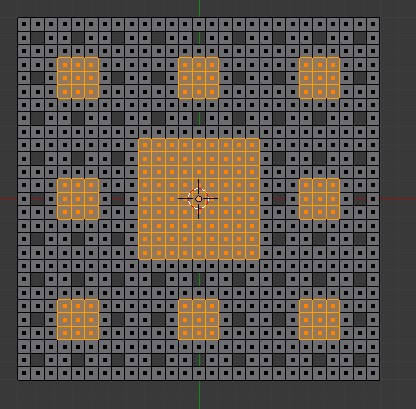 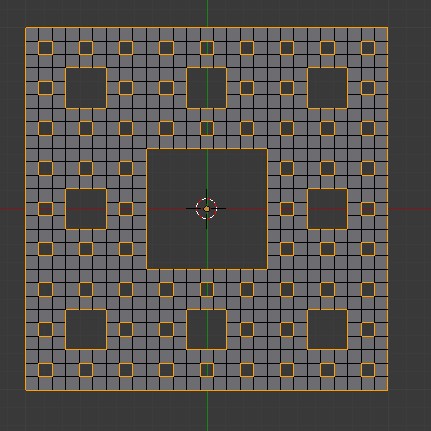 Unselect the boundary of the mesh 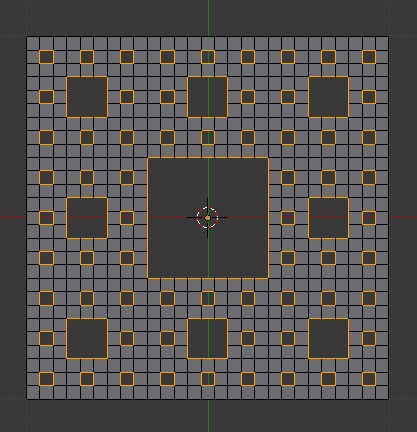 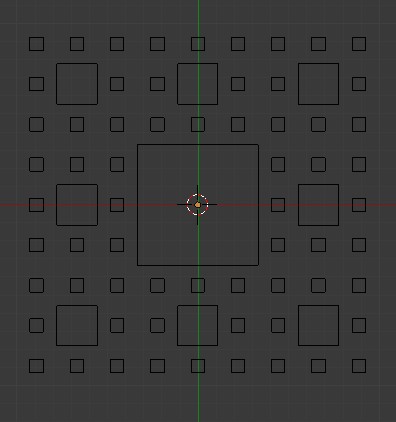 Extrude those on an axis , and make sure the mesh will be longer than a default cube Select all , press W -> Remove Doubles and press CTRL+N to recalculate the normals just in case (always good reflex to have to do this regularly during your modelling sessions to avoid nasty surprises)

Now on another layer add a Cube and go to edit mode, then subdivide that cube 3 or 4 times (or the booleans would fail very badly) 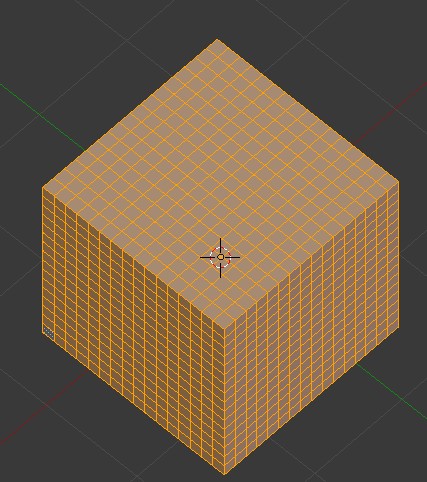 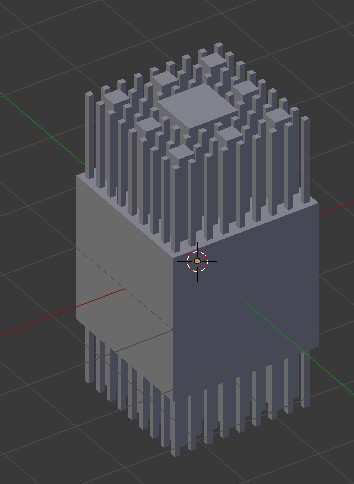 Ok, enable only the layer with the cube so it’s easier to see what’s going on, then add a Boolean modifier
Set the modifier to Difference , then at the target select the tubular object 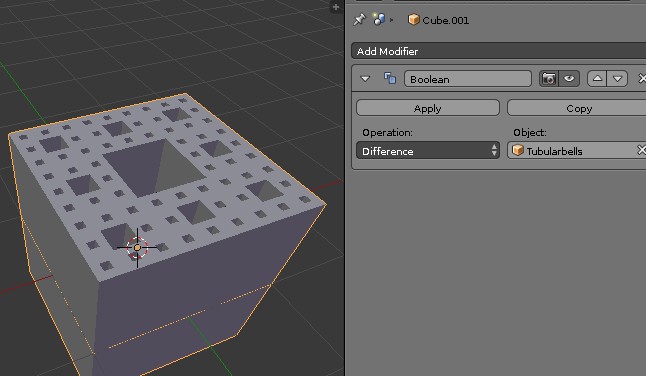 That’s good, apply the Boolean modifier.
Now is where the boolean would fail if we use it for the other sides of the cube, to avoid that problem, add a Remesh modifier set to Sharp and the octree set to 6 (you don’t want to use 5 or later boolean would just miss some faces) 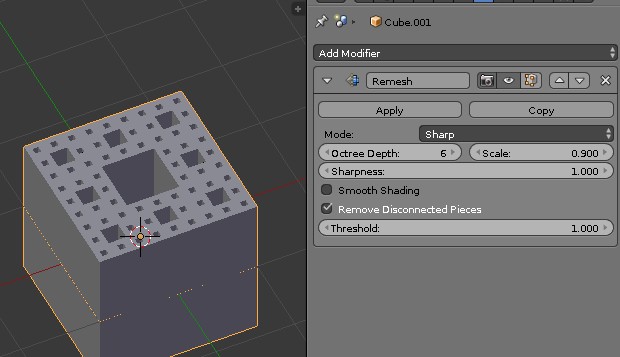 Back to the tubular object, rotate it on an axis so we’ll be able to boolan another side of the cube, after rotating it make sure to press CTRL+A -> Rotation&Scale to apply the rotation and scale in case you scaled the object instead of edit mode before (or good luck with the booleans 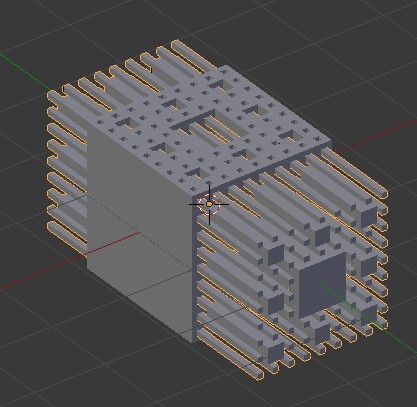 Select only the layer with the cube to make it easier to see, then add a boolean modifier to it, set it to Difference , then target the tubular object again
It will take a longer time for you to wait until it’s done (due to the increased amount of vertices on the cube, thanks or no thanks to the remesh modifier, and because Blender booleans are slow unfortunately) but it will work 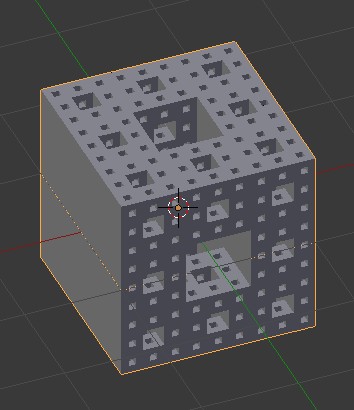 Next step, Remesh modifier again, with the same settings as before, or next booleans would fail. 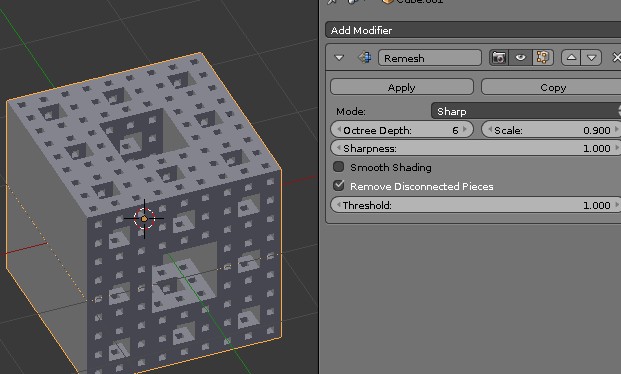 Apply the remesh modifier.
Back to the tubular object, rotate it again so it get into the last side of the cube, then press CTRL+A -> Rotation&Scale to apply rotation&scale 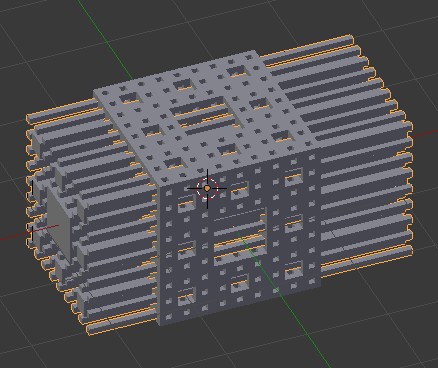 Look only on the layer with the Cube, again so you see easier, add a Boolean modifier, set it to Difference and target again the tubular object, then wait until Blender is finished with the slow booleans
Apply the boolean modifier (and wait again, slow , slow booleans …) 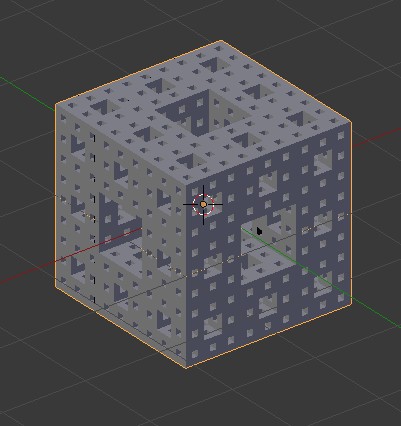 Now to complete it, add a final Remesh modifier, same setting as before, and apply that modifier 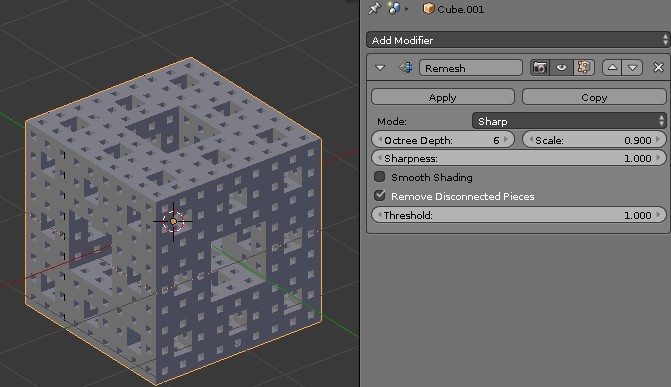 This last remesh modifier is to get rid of some bad boolean topology that could have screwed up a face or two.

Now you object is finished. 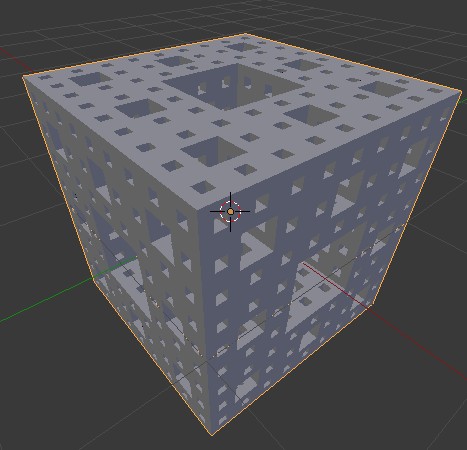 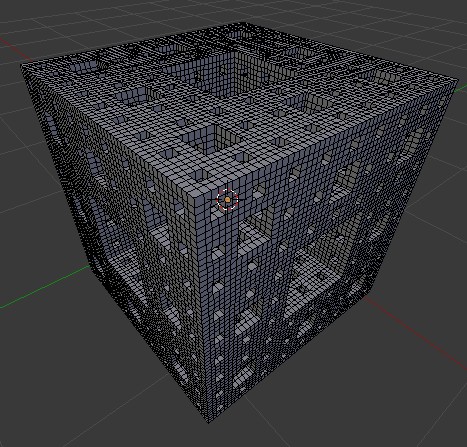 Oh, I just noticed you want a level 4 sponge. The two examples above only show level 3. I’ve added a fourth level using my method but the blend file takes a few minutes to open and each operation gets really slow because of so many layered array modifiers and the bevel modifier I have on top of that. I think the easiest way and maybe the best method performance wise is just to copy paste a bunch of cubes in edit mode and keep copying until you’ve created your level 4 shape. The other two methods mentioned are cooler though

Oh , it looks like i completely missed the “level 4” mention.
I guess the boolean+remesh method could work there too, but it would probably take much more time to build the tubular object, and wait a lot more for the slow booleans to make their effect

Thank you for you help!
However my Macbook is a bit faulty and crashes quite often, So I will probably use the least computationally heavy method. (Copying cubes you mentioned)

once you create a lvl 1 sponge though I would need a command to get rid of overlapping faces, How do I do this ?

Have you guys had experience with 3D printing ? where can I enquire to find the printer services with the latest and best printers ?
I am thinking Shapeways or Sculpteo ?

This intrigued me so i wrote a python script to generate a Menger Sponge. I would appreciate some ideas about improving its performance because at levels > 1 it is pretty slow. I didn’t even try level 3!!

Also, the resulting object has lots of extra interior faces and I don’t know how to get rid of them programmatically!

Here is the script: 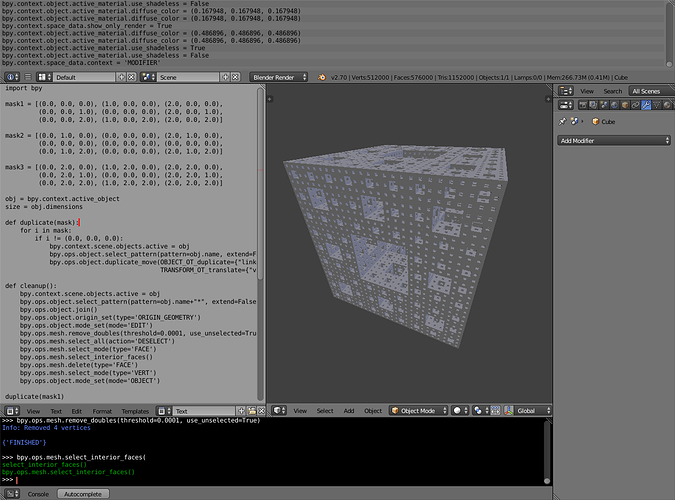 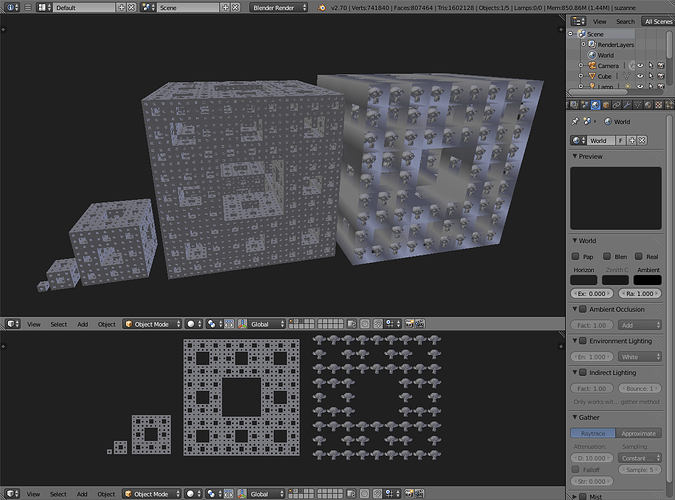 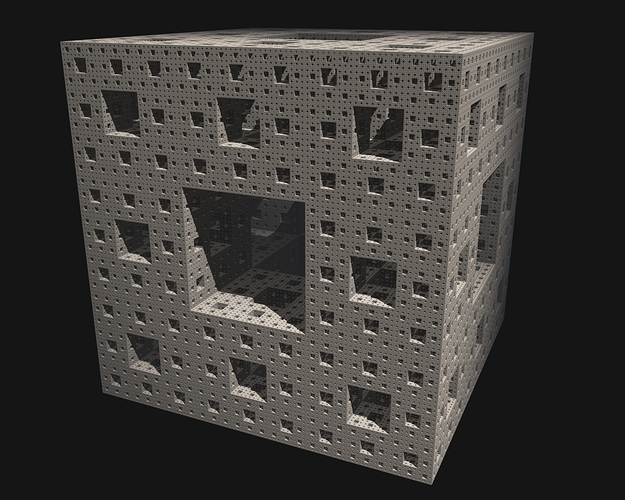 How much poly is the level 6 ?

I had 230.4 million but a fraction of that is overlapping faces I didn’t care about.

At level 7 render resolution becomes an issue because showing all levels and fitting the whole thing in a render would need a very high resolution image. That is 2k high so level 7 would need 6k image to show the lowest level at that detail (smallest holes are just few pixels).

Thank you for this script.