Addon to change the pivot and snap functions at the same time,
with modal and full customizable presets. I love this idea! Snapping and pivot go hand in hand, and I often find myself changing them both to suit a particular task, only to switch (both!) again for another…

@mkbreuer I made a quick video showcasing this addon as it’s one I always recommend to new users!

@jakro: thank you! Great that you found it useful!

I created a new version: see first post
Now you can use a cascade menu, a pie menu or add it into special menu, header or use it in a panel.

All operators works as before excepted the 3D Cursor preset.
It is now modal:
> by default it jumps to all selected
> click rightmouse after run, it jumps to active

Optional: enable infotext for the viewport (only cascade menu and pie menu) 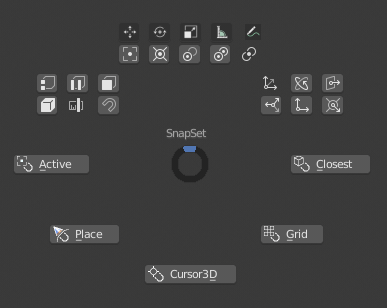 Thank you for the add-on. It goes great with decal-machine, which unfortunately forces snap mode to placing objects to surface setup. This allows me to quickly switch back. Just curious if there is an option to turn off automatic snap enable? I prefer to work by enabling snap by holding ctrl and I noticed that the snapsets enable the snap during transform.

Same Here. The add-on could be great but I don’t like the automatic snap enable. I had to comment all the lines with “use_snap = True” in ot_snapset.py to make it usable for me. It could be great to have the option to turn it off in the preferences.

Thanks guys for the feedback…
@Colacuve: i will try if i can make a modal version…
@eltarbos: i created a check button in the addon preference. There you can easily turn it on or off now.
I inform you when i add a newer version to github.

Actually what @eltarbos mentioned is what I was looking for. Thank you for addressing this

i created a check button in the addon preference. There you can easily turn it on or off now.
I inform you when i add a newer version to github.

Modal versions are also now included!
I will do much more for custom tweak now.
Let’s see how far we coming…

This is a very handy tool. Thanks.
Maybe it can’t be done, but one thing that really annoys me in Blender(Max is my usual package) is setting the origin to a vertex/edge/face. I have to go to edit mode>set the 3dcursor>go to object mode>set the origin to the cursor…it’s way too many steps. Is there a way this could be done in one go by selecting a vert/edge/face>origin to selected?

Yes, i already did it! But that is a update for the origin setup!..

Also, is there a way to change the transparency of the pie menu buttons? I would like to make them solid. Thanks.

yes! But the transparency let you see what actually snap settings are active.
I create an on/off for that too!

Update v002 for 2.80 is available in the first post.
Now fully customziable:

Ideas to improve something?..

You can do that with a built-in addon to 2.8. You have to turn on the addon though

In the addons section use the search function and look for “pie menu”.
You should see at least two addons come up (both disabled by default):
Pie Menu: 3D viewport Pie Menus
Pie Menu: UI Pie Menu Official

Turn on the first. You’ll see a number of new pie menus you can toggle on or off. A lot of them are redundant or might not be useful to you. Look for this one:
"Origin Pie: Hotkey “Alt Shift O”.
Toggle that one. It gives you some neat options to set the origin to the bottom of the geo/to your selection/ to the middle of your geo/to your cursor etc.
You can now use the origin to selection option. The only downside is that it sends you back into object mode but you might be able to fix that by changing the script (haven’t done so yet myself for some reason).

I have a number of questions/feedback. Sorry if it’s rather long.

Could you clarify how to access the context menu and what it does? Pressing W doesn’t do anything (using a fresh 2.8 install).

The button modal part. In the addon ui it says Append tookey: Button M. What do you mean by that? It seems to imply it adds a keybind to M (which it doesn’t).
It does add a keybind to the F key (as it indicates), but that toggles place snap without a way of changing it. It essentially adds a new move bind to F with the place snap (which is face snap+active+align rotation to target+project individual elements). What am I missing?
Edit: figured this out. Should be clarified in the UI.

Toggle Emboss for Tools in the ui isn’t clear as to what it does. Took me a while to figure out it removes the transparency that shows what is/isn’t active in the pie menu. I don’t know if that’s possible but wouldn’t it be a lot easier to have the active tools be highlighted like it is in the ui?

Using custom Icons isn’t quite working or it isn’t particularly clear how to use. It causes menus to disappear and the addon to bug out.

Appending to the header is maybe not working as intended? Sometimes it doesn’t show. When it does it’s overlapped by the default ui menus.

On the pie menu I’m not sure how relevant the move/scale/rotate/annotate and measure buttons are since they’re rarely clicked on, available on the default ui and add more clutter to the already heavy pie menu.