who know is there any way to realize merging a lot of vertices same as merge one vertice at one time?

I hate gap after I duplicated one part to make whole body and then used ‘smooth’ and ’ Subsurf’.

It’s just partial help if I ‘remove duplicate’ and ‘Ctr+N’ to adjust outline. I found I can’t resolve it unless I merge vertice one by one. It wastes a lot time, and that is why I ask this question.

You can adjust the remove doubles gap, to merge pairs of vertices that are further away. Sometimes this helps “remove doubles” merge more of the pairs you want joined, but sometimes if the gap is too big it merges vertices you don’t want merged, so adjust with caution. Another trick I use is to zoom in very close, and use Shift to fine tune the motion, so I can get the vertices very close together, before doing a remove doubles.

Another alternative to duplicating is to use the mirror modifier, which now has a “use clipping” button, which will stick the vertices on the joining edge to each other. Very handy, if your parts are mirrored.

I’d be interested in knowing if there’s a python script or other solution to this problem, too, since, as DELLCHE points out, merging the vertices along a join between two halves of a model, one pair at a time, is time consuming and tedious.

One fine way to merge a row of vertives that are connected (kinda like an egde-ring) is to do [W]->Merge->Collapse with the selected edge-connections. Just experiment with it on some edges to see if it can help you.

And of course the [X]->Edge Loop may sometimes work as well (just don’t select the whole edge-loop if it deletes too much). Again, just experiment to see if it helps.

If the vertices are not connected by edges, Orinoco’s suggestions are the way to go.
Maybe if there are e.g two vertex-rings close to each other just select them all and scale them to 0 along one axis ([S]->[X,Y,Z]->[0]->[Enter]) so they are closer together and can be removed with [W]->Remove Doubles

Thank you Orinoco, althogh I knew your advice.
Thanx Hoehrer as well, althogh I didn’t understand “W]->Merge->Collapse with the selected edge-connections” very well. I tried but all connected to one point.

Yesterday, I had thoght a way but I have not yet tested it.
If two objects have totally same outline, why not give them a special vertex parent located in object center. Then I can use move key"N" to setup same loc value of two parent vertex. That will cause two object really collapse, then remove double.

Maybe if there are e.g two vertex-rings close to each other just select them all and scale them to 0 along one axis ([S]->[X,Y,Z]->[0]->[Enter]) so they are closer together and can be removed with [W]->Remove Doubles

Good idea! Thanks. I hadn’t thought of using scale to zero in quite that way.

Which gave me an idea, which I’ve just tested, and it works! 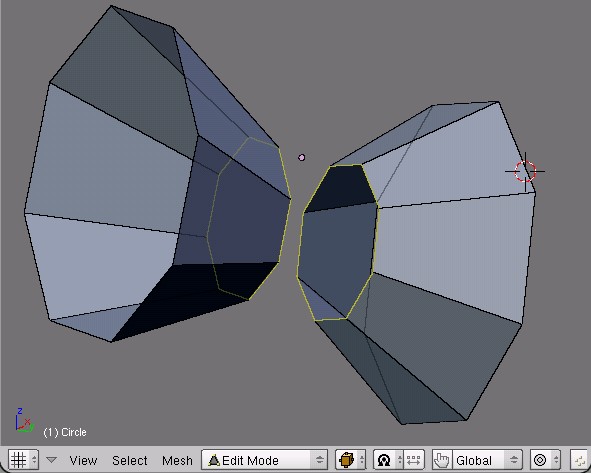 Here are two separate meshes I want to attach to each other. Note: they are not particularly close, they are also not lined up on any axis (deliberately: I moved the second mesh down and rotated it a bit.) Select the two edge loops to be joined. 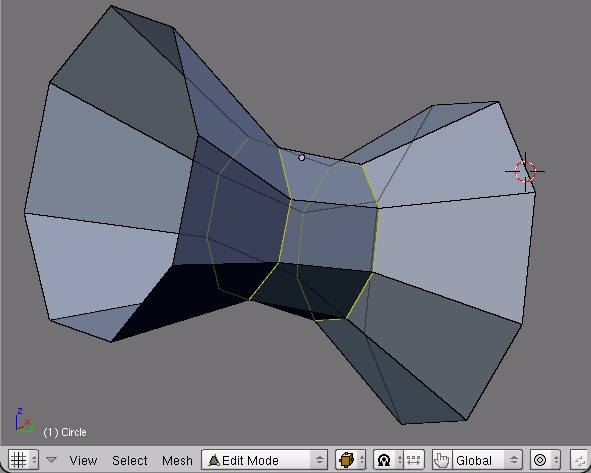 Use Mesh>>Scripts>>Bridge Faces/Edge-Loops to create faces between these two loops. 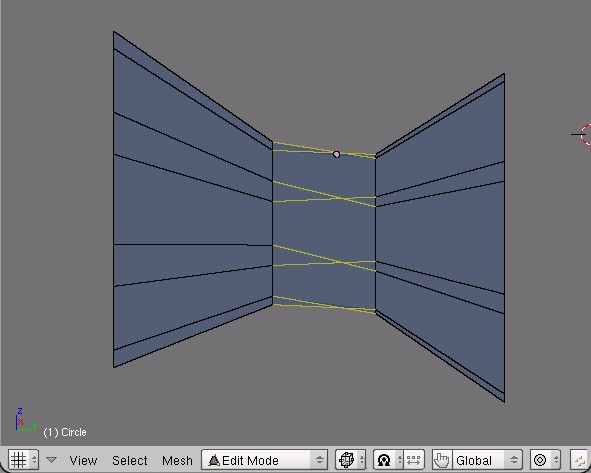 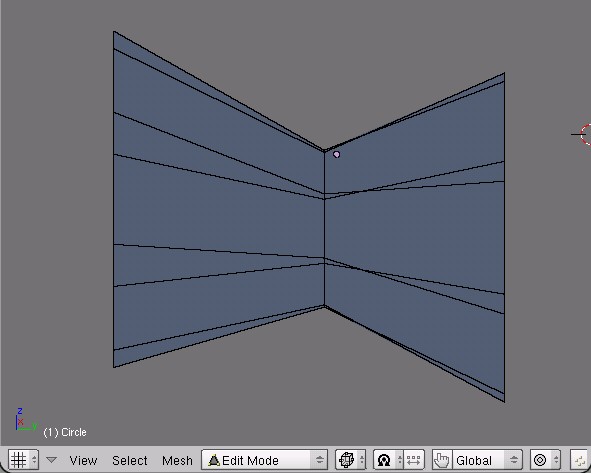 Use Mesh>>Edges>>Collapse to remove the new edges and connect the (former) separate edge loops.

Voila! The only requirement is that both edge loops have the same number of edges.

Thank you Orinoco, althogh I knew your advice.
Thanx Hoehrer as well, althogh I didn’t understand “[W]->Merge->Collapse with the selected edge-connections” very well. I tried but all connected to one point.

That shouldn’t happen in most cases. But it depends on the usage, let me show an example of a useful application: 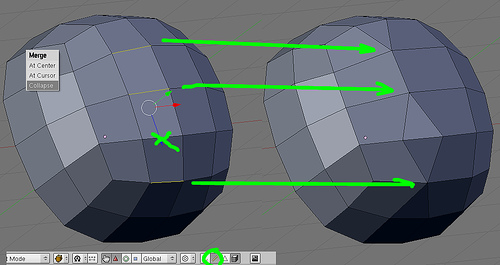 Of course this only works of there are edges that connect the vertices.

Thank you Hoehrer & Orinoco for you giving me show of “edge collapse”.
It’s great helpful skill and I like it.