Hey guys, made this ages ago, but have recently been prompted to work out the bugs, and I added a damage thing… 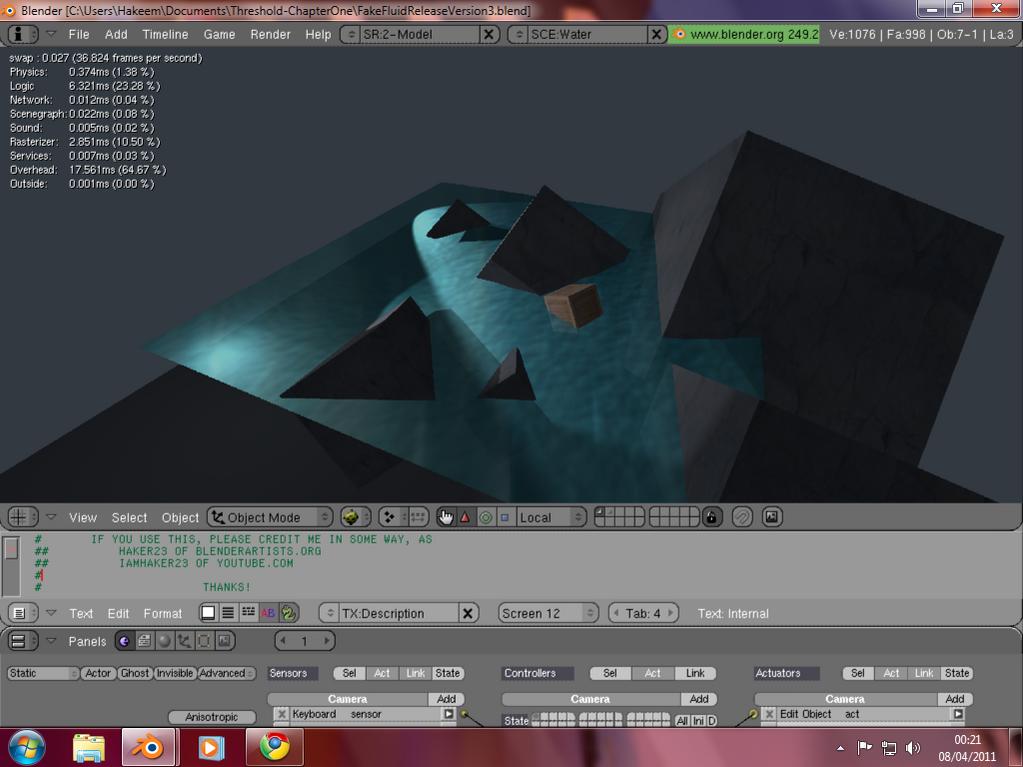 EDIT: I really went all out on the whole “comment and document” the code thing…

I know we (Or at least, I do sometimes, anyay) tend to look at a file vaguely, in not too much detail, but the results of the initial running aren’t the only ones, if you change some values in the code and on the objects, you can tweak them to get an effect you like… try painting the water mesh (vertex paint, only RED has an effect) or changing some variables values in the scripts…

The barrel deformation looks good - I’ll have to check out the download to see how the water works.

The water isn’t very obvious (it’s very obvious if you disable the textures and enable vertex colour on the material…), I haven’t tried it with a large deformation (try increasing the “scale” and the “ss” variables in the fluid script…). The default on the barrel is low, the “weakness” property of the object determines the amount of deformation, larger value, more deformation…

Any feedback? useful? useless? not quite there yet, anyone plan on using this? there are 31 downloads, I’m just curious to see what people thought…

Interesting, I could not notice water well but the idea could be useful!

Set the thresholds up a bit. and also state this is for 2.49

@Teoda I did have it set to probably the most subtle threshold values… :o

Ok, I turned it up a bit and it was very noticeable! Nice!!

thanks, I just wish I knew how to code GLSL shaders, but am too embarrassed to admit I need to go back to tutorials… not that I do… :o

I don’t know how to code GLSL shaders either, but it’s really helpful to download some shaders - an example would be AMD’s RenderMonkey program. I managed to get a nice electricity shader running from there.

Thanks, I’ll look into it…

I was completely lost for the whole shaders thing, then someone mentioned tutorials, which, somehow, I’d managed to completely forget… (I now ove the vertex paint tool, just found a texturing workflow that works for me… :D)

Any watchers of my FPS stuff get ready for TCO Mark II, I’ve basically redone the whole thing from scratch using the things I learned when I made the first stuff, looks so much better and I like to think it actually has a “feel” to it when playing…

to GLSL tutorials and beyond!