I am very new to blender and trying to make a simple animation of a cat. I recently added the nose to the model (by pulling out a few points below the eyes) and now when I animate there is this weird disintegration/blurring effect appearing around the ears and eyes of the cat. I attached the ears to the body mesh using ‘join’, maybe that is where I went wrong? I had to affix the ears and eyes that way, otherwise they wouldn’t move with the head.

For some reason It won’t let me upload the .blend file (maybe b/c its over 2 meg?) but I attached a picture of the 100/120 frame. You can see the blurring effect.

Something else I just noticed is the tail also has a bit of that effect, although it wasn’t attached like the eyes and ears. Also in the blender GUI there is a weird ‘spray’ of vertices near the ears, but they fill up a much smaller space than the blur effect. 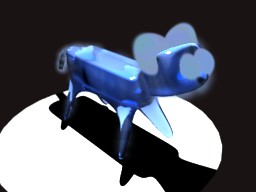 You have a Material assigned to some verts that has “Halo” set on.

No, thats not it, I checked all the materials and nothing has ‘Halo’ set. The blend file is 568 Kb and it when I try to upload it I get ‘invalid file’. Can someone explain how I can get my blend file on here so you guys can help me with this one?

Sign up there, he’s a blenderhead and offere that space for free. Then upload and paste the link here.

I removed all the materials and it still happens. I think it has something to do with a combination of animation + armatures + subsurf modifier. Someone please help!

You can get my blender file here:

You have a particle system turned on. Select the main body mesh, press F7 twice to get to the physics/particles buttons, and delete the particle system.

Thanks alot everyone! The history was I originally had hair on the cat as static particles, but I had (thought) I disabled it because of the slow render times. I haven’t had a chance to look at my file yet, but what probably happened is I changed the particles from static to dynamic.