Mesh is attaching to armature too close

Everytime I weight paint the leg to the bone it clings to close, how can I stop this? I have also tried envelopes. 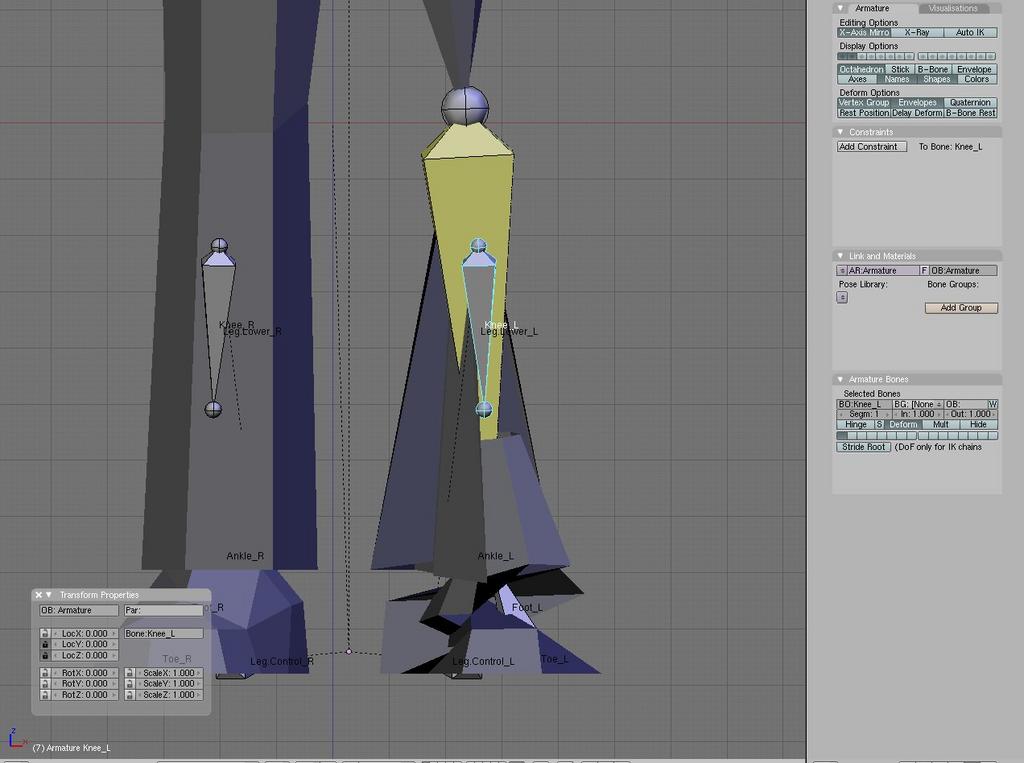 can you post blend file? The mesh shouldn’t deform when you weight it to a bone, unless the rig is posed in pose mode.

the bone it is supposed to be attached to, probably has a different position/location/scale in editmode and pose mode. You can check it out by turning on “axes” in the armature tab. Go in and out of editmode, and if the axis are changed, either change the roll of the bone (ctrl+R) or, more likely, change the pole offset value on the IK constraint.
that’s just the roll, I doubt it will be the scale or location you’ll need to worry about.

Change the “To:” value to the last “-” in the “Locked Track” constraint on the ‘Leg.Lower_L’ bone.

Another problem. When i switch from edit mode to pose mode the bones and mesh move, but i want it to stay as i set it in edit mode. 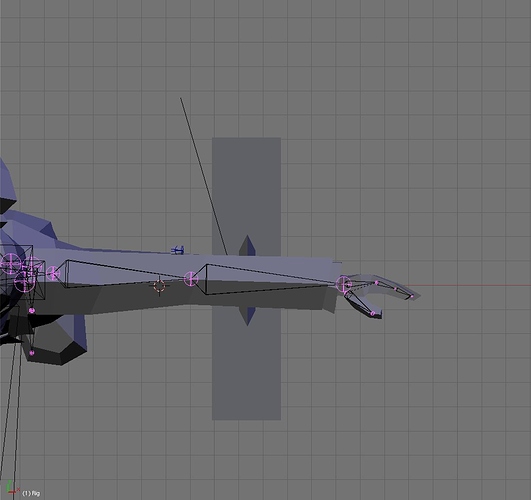 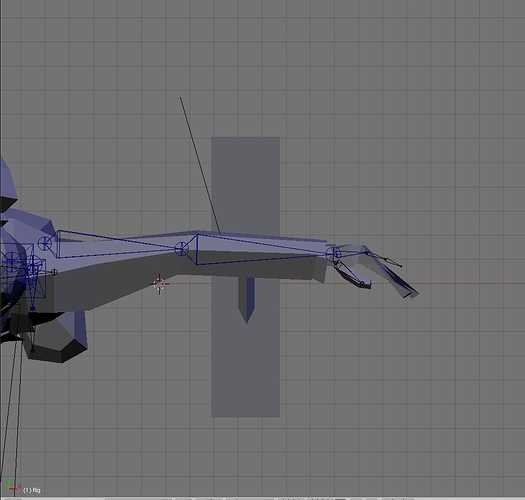 You have the “Upper Arm L” bone copying the location of the 'Shoulder Socket" bone. They are not origionally in the same place in edit mode, so they will snap in pose mode because of the constraint.

Go into edit mode of the armature, select the base of the "Shoulder Socket L’ bone, press shift + s and snap the cursor to selection. Then select the base of the “Upper Arm L” bone, press shift + s again and snap selection to cursor. Then adjust the rest of the chain accordingly. Or you can do that in reverse and move the shoulder socket bone, be sure to move the “_IK_Upper Arm L” bone too if you do so.

Hi could you link this mesh and armature together please, and if you could record how you did it. I would be SOOOO GRATEFUL

I got told i had to use this armature to attach to this mesh, however the armature is to small for the mesh. So i went into object mode and scaled it, then went into edit mode to move certain bones to fit the mesh. Now it fits in edit mode, but when i go to pose mode it all changes. I have re done it loads of times, each time something else changes when i go into pose mode. Whats happening?

umm…I’m not really sure what your problem is…I just checked out the last file you have attached to your last post and I can go from pose to object to edit mode and nothing strange happens. In the file attached to the next to last post, the armature is smaller than the character, but I don’t see anything wrong there either. The only thing I noticed is that when you scaled up the armature and repositioned it, you didn’t scale the the text for the fk/ik sliders. The bones that are the sliders themselves did get scaled, but the text that tells the animator what the sliders are and thier range of movement didn’t get scaled.

How do i do “scale the the text for the fk/ik sliders.”

Also the “Salesman need help 2.blend (737.1 KB, 3 views)” file, does change. Go to front view then switch between pose and object, the legs shift up and down. This can also be seen in the side view.

ok, the fk/ik sliders are on the last armature layer in the first group. In the editing panel, under armatures, there is a display options panel that consists of two groups of 8 boxes. The fk/ik sliders are on the 8th box from the left. When those bones were scaled up, the text & box for the slider need to be scaled as well. I don’t know how you scaled those bones (where you scaling pivot point was), but I can select the text & box and scale and move it in object mode to get it close to where they should be.

As for the problem with the legs moving between object and pose modes… on the second group of 8 bone layers, the layer on the left contains leg bones that did not get scaled with the leg bones on the first layer. (the arms where scaled) Also, the toe bones (there are two of them) appear to be folded back onto the foot bones. I don’t know if that is a problem with the constraints on those bones or not. This rig has python scripts with some of the constraints, and I don’t understand or have worked with them, so I’m not much help there. I have never scaled an armature or reused one, I make them for the character and I’m not a pro at rigging.

Sorry I’m not more help, but I hope the things I noticed give you some direction.

I see this is giving you some trouble… at this point it seems the feet are actually not working properly anymore, likely because they have been repositioned improperly at some point in the process. You can either fix them by figuring out how they were broken, or just start over with the original rig as I have done here. This takes only a few minutes (for this rig atleast… more controls = more time) when it is done properly.

The steps I used are as follows:

**I also rotated the hands to be palm-down. In the future I suggest building all of your characters this way, since it is the natural resting position of the hands and so rigs are most often built with palms facing down. You will still need to add in extra fingers and facial controls and polish the weight painting, but otherwise… voilà!