I’ve rigged a cartoon dog recently (“Gromit” Aardman fame), everything is working well since I weight painted things, the only issue I’m having is with the ears.

The ears are weight painted fine, just the same as the tail which works well - they are just a chain of bones, 4 in total. 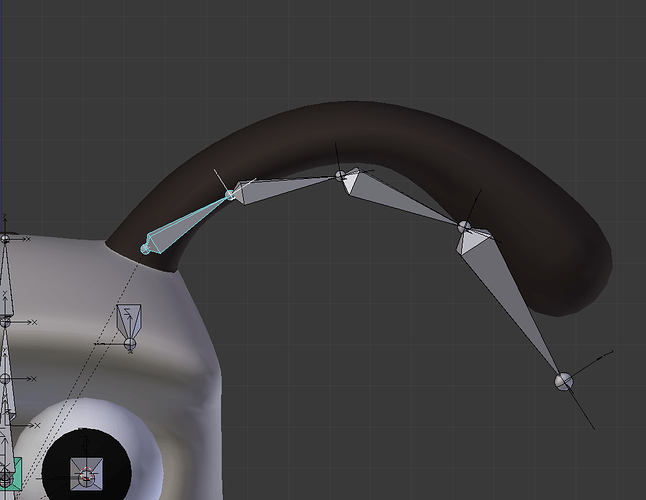 When I move the bones in Pose mode, the mesh deforms correctly, but doesn’t keep in sync with the armature.

I tried using “Preserve Volumes” to see if that would help, but it didn’t make any difference.

Just in case anyone asks, I’ve only got one Armature modifier for the mesh - I’ve tried switching the order of the subsurf to before and after, but this didn’t make any difference either.

It’s weird because the tail is essentially the same and doesn’t have this issue.

Have you checked the weight painting of each bone? I had a similar problem to this, and it turned out to be that the weight was too low.

I’d guess that you have a doubled weight paint on the ears… IE in additon to the bone weight, they still have weight attached to some other group as well. Since Blender will ‘normalize’ weights, (ie, all weights on a vertice will add up to 1) this would cause the effective weight of the bone influence to be lessened, causeing the results seen here

There are a number of reasons that would cause this problem. A quick checklist that I can think of is 1. make sure that the vertex groups on the ears are not added to another vertex group. You might have them added to the head deform bone also which could cause bad deformities.Once you’ve parented the mesh to armature it sets up list of new vertex groups assigned to each bone. This can be checked easily by going to vertex groups in edit mode, and hitting select on the likely canditates e.g head bone, and if the vertexes on the ears highlight you know which bone is causing probs. can also be done in weigh painting mode, but 1st method is quicker. 2. The position of the armature modifier in the stack is important , if mesh isn’t mirrored it should be at the top, above subsurf. If it is mirrored the order should be mirror, armature, Subsurf.3. As mentioned the weight of the ears bones may not be high enough.Hope this helps.

I agree with everyone’s idea that the mesh is being influenced by bones other than the ear bones as the cause of the problem.

well dunne’s 1st method is a good idea, but I’d like to suggest a quicker way (imo) to check for the problem. In edit mode for the mesh, select a vertex, probably one on the outer-most part of the ear, and in the transforms panel (n-key), you’ll find a listing of all vertex groups that vertex belongs to and what weight each bone has. You can also adjust the weight by right-clicking on the value and moving the mouse left-right.

wow I didn’t know this, great tip. thanks Randy!!!