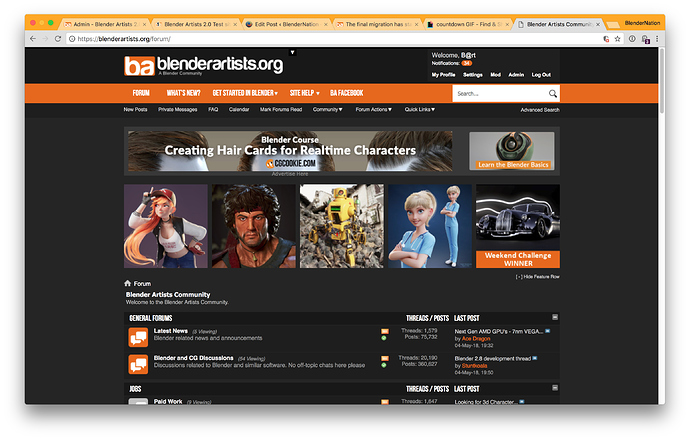 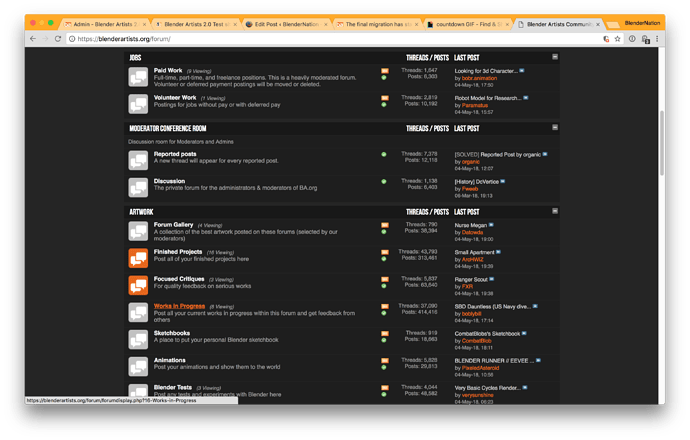 I agree to the vertical alignment. I tried it with Chrome dev tools and it’s much cleaner than multiple subcategories per line. 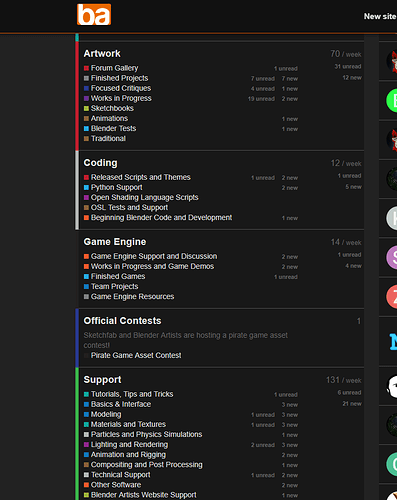 This link might be good for inspiration, since they are the same engine: https://community.imgur.com/

They use far less categories.

Can you also add a screenshot from an active thread ?

Not right now, we’ll soon have the old site up for reference.

@Cebbi I’ve done a quick test for the subcategory alignment on the light theme - please have a look. I don’t have the information of posts per subcategory though.

Will there be an option to hide Categories which Users don´t frequently visit?

This is interesting to me that since I am 40 my eye sight drops and I notice many sites lacking help for people like me.

And I want to make sure I don’t have the old site better in memory when making a suggestion for the new site.

The main issue is a distinct lack of visual hierarchy, which makes it incredibly tough for our brain to identify what is important first, and what to focus on next, and so on.

I am also no fan of dark forums, because the readability suffers in general, and it results in afterimages on the retina.

I made a quick Stylebot/Stylish sheet for the light theme’s landing page. Definitely not perfect yet, but I am already using it myself, because the original is so abysmal, that I couldn’t stand it any longer.

The code is pretty badly organized and shoddy, because I just went through it quickly, but for those of you who prefer a better white theme landing page, here’s the stylesheet:
http://www.upl.co/uploads/lightthemeadjustment1525559050.txt

Just copy the code in Stylish (Firefox) or Stylebot (Chrome). Also, this is meant for larger desktop screens. Haven’t tested for mobile or smaller screens - mine is portrait 1920x1200 screen or half of a 2560x1440 screen.

Comments welcome, and hopefully this adds some constructive criticism.

I use stylish with the following tweaks:

I don’t have much to say on the categories themselves.

6915+4780=11695, which translates to #2b2c2c. I think that might be a good starting point to switch the mid gray to(though, for people with weaker screens, it might need to be a teensy bit brighter.

And I really don’t understand why the current light theme insists on a grey tint to denote visited posts - I generally want to see clearly which posts I visited earlier, either to avoid them, or to revisit: a grey tint that hardly differentiates it visually from the other posts in the list is rather unhelpful. I changed that as well. The gravatar received a subtle stroke, because avatars with a white background looked odd (such as mine).

The emoticons are problematic in the light theme as well (bright yellow on white). I added a bit of a subtle dropshadow to improve the visual readability.

And some other things (@Herbert123 is now more obvious as well (orange) .

Really, I think the flat design and “subtlety” in colours in this new light theme make for an unreadable mess. Content is king, not design.

Pretty happy with the result so far.

I updated the header bar, and it looks a bit friendlier now. Let me know what you think - my feeling is that the light theme’s usability and readability has improved by spades, but this is of course my personal opinion. For me it works really well now.

Still some issues to resolve, but I am fine with it so far. Even the mobile version looks good.

(copy css and paste in Stylish (Firefox) or Stylebot (Chrome).

This looks much more clear. - The color coding is still strange though. If you keep the strip on the side it would make sense to color the headlines in the color of the section as well. Or else just get rid of the strip or maketwo alternating colors to give some simple structure to the different sections?

Yes, I understand what you are saying - but if all headings would be coloured differently, the overall visual readability of the page would be reduced again due to the visual noise.

I agree, I would explore “alternate colors” maybe have the strip in two grey tones, or grey and orange? - Just something to visually indicate where the sections start and end. - Simple.

EDIT: Also maybe go with white text and icons on the top bar and “new topic” button? - That would look a bit more fresh I believe.

Agree about the home page lacking visual hierarchy and clear layout, but it should be fixable with CSS once the major background issues are out of the way. It’s a bit of an eyesore at the moment, but no need to panic about it. I’m sure a solution will be forthcoming.

I’ve opened a topic for gathering feedback/ideas on the category colors:

Now that things have stabilised a bit, I’d like to address of the category colours. As it’s a lot of work to change (each category and sub-category needs to be updated manually

), I’d like to gather some input before we implement this. Please post your suggestion, if possible with a mockup screenshot. [image] Keep in mind that these colors also appear on category selector lists throughout the site, like here: [image]