Hey guys, saw this and thought it was amazing, only problem is that it’s a Lightwave plugin. What do you guys think about it?

I can personally see it being incredible as I mainly do subsurf modeling, would be amazing if we could get something like this in Blender sometime down the line.

Yes this is really nice !

Reminds me of mesh fusion for modo
and who uses lightwave anymore?

This will be good for Lightwave users and those who still want to stick with paid applications, but with a lower price (Lightwave is now the only constantly developed full 3D application below the 1K mark).

Now if Blender could get something like this (perhaps through an enhanced boolean modifier or something).

this is amazing, but I’m a little bit skeptic about this kind of automatism, maybe for sketching it’s ok, but for the final product probably I would clean the topology anyway.

I’m thinking to get Lightwave. Well probably not, but that kind of automation is very useful. Just currently I’m creating a complex model with some parts and then fusing them into one by hand. It’s really time consuming compared to this.

There is already an add-on called BoolTool. Good ideas into this presentation to add into future updates, if the author of BoolTool is interested.

i like the bevelling/falloff effect. Can blender do that?

What BoolTool does is simply performing a normal boolean operation, without taking topology into account. This tool here, as shown in the video, automatically adapt the topology of both the objects involved to make it as clear and usable as possible. That’s so cool!

This looks so nice for conceptual modeling & sculpting

Here’s (Geometric penetrations) some math descriptions about functions behind (it’s in german for use in c4d).
Though looking at the formulas, am thinking maybe, could be adapted… in blender with python? With BoolTool :spin: Ahhh
I don’t know. Could please, someone fluent in german, math & python explain it a bit further? 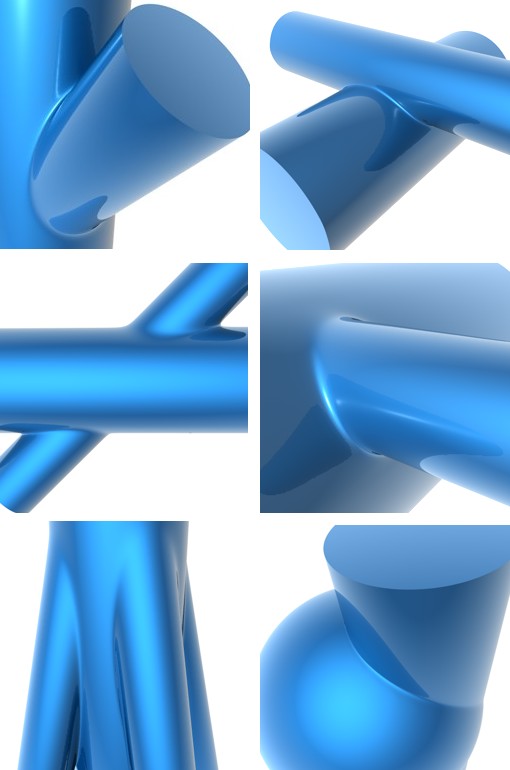 maybe its T-Splines and trimmed beziers:

maybe its T-Splines and trimmed beziers:

T-splines has been purchased by Autodesk a while back and the technology is patented (which means it’s not possible for the Blender devs. to simply go ahead and implement it).

The nice thing about technologies like Mesh Fusion is that you’re able to stay with subdivision surfaces and all of the power it gives you in terms of tools.

t-splines is a nurbs thing… blender hasnt seen an update there for a decade. I doubt they would implement it, even if autodesk didnt have the patent.
The new nurbs stuff from gsoc 2014 has been forgotten too.

It would be quite amazing if something similar was to be done for Blender, probably quite difficult to code tho. imagine the maths!

Producing bevels, that have smooth topological integration with the whole object, in boolean seam areas: this remains still an essential need in 3D modelling world. Mesh fusion and this plugin here are good tries but still have problems as to achieving a really satisfying topological result.

If someone finds a solution and offers a way for smooth quad mesh topological integration in boolean processes, it would be opened a whole new epoch in 3D modelling. Imagine what may mean working with booleans by having such a freedom of adding to the seams every kind of beveling you while still keeping the topology of the whole mesh in a quite further workable sds condition…

I would love to have something like this in Blender, Campbell are you there? LOL

@Nerai
As i understand from first looks, these are parametric objects (with the help of google translation - Geometric Penetrations (EN)).
“NURBS” in C4D was old naming for polygon subDivisions.
Here penetrations/cuts (vertices & edges) that are made by two parametric objects gets recognized/identified.
Then extra loops are added to both sides of penetration & to objects sharp edges.
Finally the boolean union object gets subdivided to achieve such transition over edges.
It can be done manually… though in the example the process is all automated.

So as the objects needs to be parametric, this is of no help in blender, because as soon as you start to manipulate it, it looses it’s parametric properties (becomes a mesh).

Commented on this over on the Modo forums as well, its a fairly new topic over there.

The simplicity is incredibly nice, it poses an interesting contrast between mesh fusion and meta mesh. Not sure how destructive the move is though, I know with Mesh Fusion its non destructive until finalization…meaning multiple parts can be applied in a dynamic state. Still though, from a user perspective it looks simple and easy to use…and thats in many ways far more important.

As for LW… LW lost some of its key players, they went on to make modo. In some ways there is some overlap in approach and design, in other ways, Modo is the evolution from what LW didnt do so well on. Its curious to see if LW can come back in a significant way. This and LWCAD certainly helps their case… not to mention they lowered their price to be under $1K, which means LW is getting either desperate or very competitive. I look forward to the competition. Users win out in the end.

So as the objects needs to be parametric, this is of no help in blender, because as soon as you start to manipulate it, it looses it’s parametric properties (becomes a mesh).

Yeah I understand what you’re saying, I was thinking perhaps it is a form of BREP (afaik that means the object is parametric) and converts to mesh and back to parametric during the operation.

The video reminds me of using a Boolean modifier on a highly tessellated model, with the added feature of neat tessellation of the joins by adding control points / loop cuts etc to each source model at the control point level.