I am sorry for the poor Quality, but i do not know how to compress it the right way

I am trying to make a low poly animation were a meteor hits a planet. My current problem is that I do not know how to make a good looking smoke cloud on impact. The one that I got right now is tiny and weird. Also I think the explosion particels could be imporved in some way. Tipps for a better atmosphere and clouds are highly appreciated. If you can help my in these points or even spot other things that could be imporved I would be happy if you would give me answer/ suggestion. Thank you in Advance. 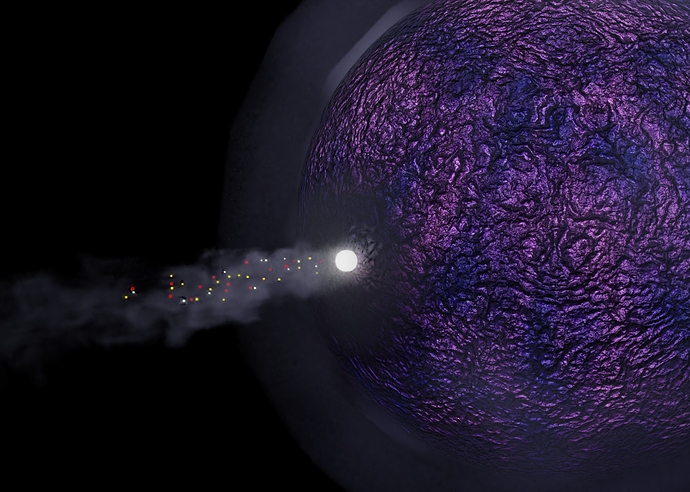 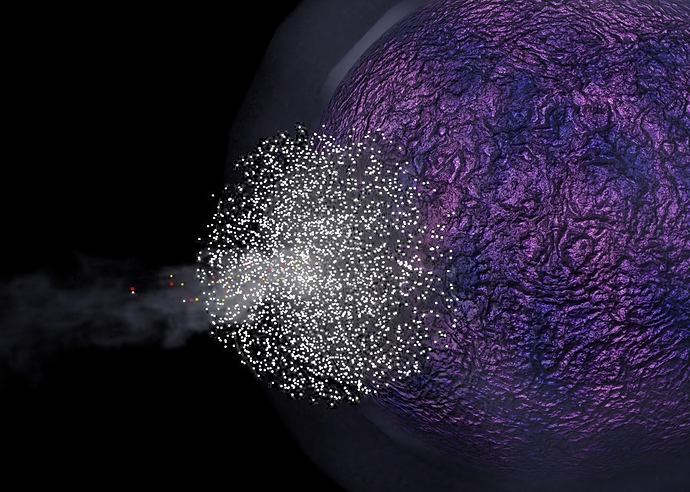 I have updatet the lighting in these exaples to be higher than in the video file. But they seem to be a little bit too high now so I will have to find the optimal values.
If you need Images of a sertan Thing/part of the Video in higher quality just ask for it I will upload it for you.

First, lets look at the meteor.

Thank you for your answer. I will see what I can do, especially the smoke gives me a head ache. Shall I just use less aggresive colors, like make them a littel washed out ( for the explosion particles)? I try to manipulate the impact to be less spherical, mabey an other particelsystem would help? I can resize the explosion radius to be a littel smaller.

I fully agree with all of Grzesieks Points.

And for the planet itself… are you using evee or cycles? Because for cycles, there is a very good volumetric atmosphere shader. It takes ages to render unfortionately, but it Looks really good. For evee, just a simple diffuse mixed with a transparent controlled by a fresnel already Looks really good with some post-processing. I would recomment this tutorial:

I like your Ideas, I have tryed some of my own today but they all failed. I use cycles renderer on 2.79. I hope that I can implement it tomorrow or at the weekend. I really like the idea of using the particels as smoke emitters. Thanks for your answer.

Till know I only have given the astroid an other shape and experimented with the particle trail. I decided to scrap the trail in the end.

Do you guys also have any tipps with wich I could improve my render times. It takes forever to render all 100 frames that are currently part of the animation. I am using the basic recommondations that I could find on you tube, like auto tile size addon and gpu compute. Would it in my case make sense to bake some of the textures or does it only makes sense when I am sure that I am not going to be changing that part of the scene anymore.

Why is this happening, it is destroing my animation. I have selectet the object that moves ( it moves on farme 3) , the transform does not change at all. The other sphere does not have an rigid body so the do not push each other away, it is not set to dynamic anyway. Any ideas on why this is happening?

Maybe it could help baking some textures, but this makes the most sence for scenes without any moving objects.
I guess you already heard about decreasing bounces and samples right?
You could maybe decrease the Resolution for test renders, if you just want to see the Basics.
Of cause, you could also just switch to 2.8 and use Evee for preview or maybe even final Rendering.

For improving your Knowledge about particles smoke etc, I can recomment Iridesium
https://www.youtube.com/channel/UCsVG9hd6Dqdj7lP-YPIgCjg

I´m sorry I didn´t understand that

No problem I have been finally abel to figure out how to solve it. At least kind of. I just restarted blender a couple of times and rebaked all the particles and smoke till it magicaly fixed it self.

So I have finally maneged to get some improvements don. Then sun right now is just a placeholder for a better sun. In my eyes the explosion might now be to small.

If you guys are interessted and still want to follow along this projekt of mine I would be very happy about it.

I also don t know what happened to the crater, i have to check that out later. I also think a background would not hurt the general appeal of the animation. Particel smoke also seems to be not working yet.