I created the following image for the weekend challenge last weekend and would like some feeback on it. Things I can think of would be bump mapping and guttering/drainpipes on the house, neither of which I had time for but which would have improved the realism. Any C&C would be valued, I promise not to be offended whatever you say!

Also, before I enter another contest, it would be interesting to know what people are looking for, as far as I can see the entries which got more votes were less realistic, more CG ‘style’, is that what tends to win? 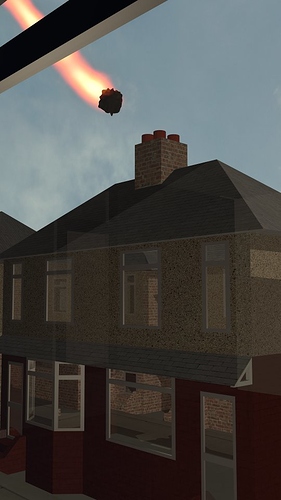 My humble opinion… : You need to get the focus of your subject more on the comet and less on the houses, after all thats what should draw attention. The comet should have more “smoke” and not as long a burning tail maybe add a few smaller particles that are red hot and shoot at the same path around and behind the meteor (as it breaks up travelling in the atmosphere). Maybe trails of compressed air around it … Also the light on the buildinngs needs some playing with. In a nutshell it needs to look more dramatic as the impending doom of the crash isnt depicted