Well I think her hair came out really nice Photox, the skin shader would certainly be welcome. But I must say I’m really impressed with that lacy blouse… how did you do that?

The blouse is just a black and white texture used as a mask between almost fully transparent and semi-tranparent. I would probably include a few nice pieces of clothing.

The 20 minutes to an hour is the time to append the materials and apply them, to make vertex groups comb the hair etc…

The shader, having no sss (or none by default) makes render times much faster, especially on GPU. Of course that depend so much on a person’s specs.

the skin looks awesome. the eyebrows are kind of weird though.

Without doubt the eyebrows are the weakest part.

I have tried so many things and I just can’t get them right. I’ll figure it out.

Here’s the same shader on a completely different makehuman. 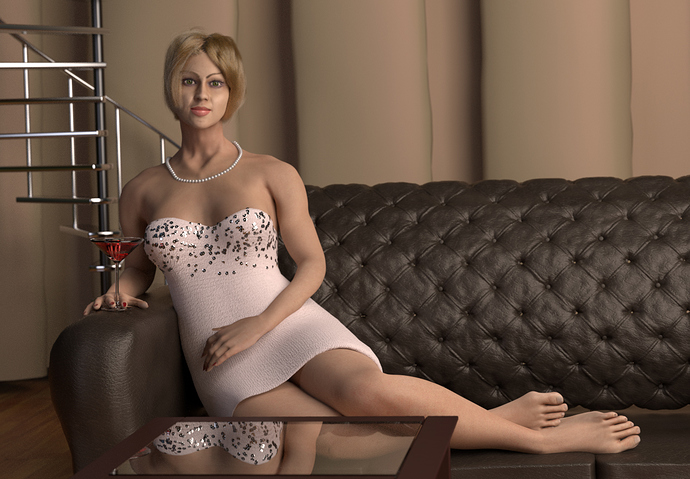 maybe try a more vertical orientation of the hairs… 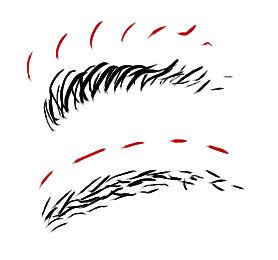 I’m going back to references and notes on this. I think the major issue, is that I need to make the skin underneather darker, more saturated and pushed toward red. That will allow for fewer hairs. This is for a styled and plucked female eyebrow. Here’s my reference notes.

Well the skin shader makes her look like she’s 50 for some reason … If you make a 16 yo character, it looks weird …
The eyebrows does look less weird now, but still a bit weird to me too.
For no SSS, it looks very realistic, good job !

@modron, thanks. I think it looks better too.

@SolarLiner, I appreciate the the critique. You were right. I increased the roughness through a colorramp on the gloss, and overall reduced the amount of gloss. I added some saturation back into the color map and added a little bit of blush to the cheeks. I also realized that I had hidden the facial hairs. It’s extremely subtle but they soften the skin. It’s back in this render. I also smoothed the creases under the eyes on multi-res 1, which is what this is rendering at. The result is younger, softer skin.

I realize that this model is looking young, and I am going to crank out another makehuman who is a few years older. It is my my intention that the model appear in her early 20s.

@minoribus, Yes it my hope that this set of assets be usable and able to create noise free renders in a reasonable amount of time. Right now that means no SSS. I reduced the amount of random noise in the eyebrow particles, and I changed the left eyelashes to be alot more uniform and to start closer to the center. I hadn’t noticed that, thank you. 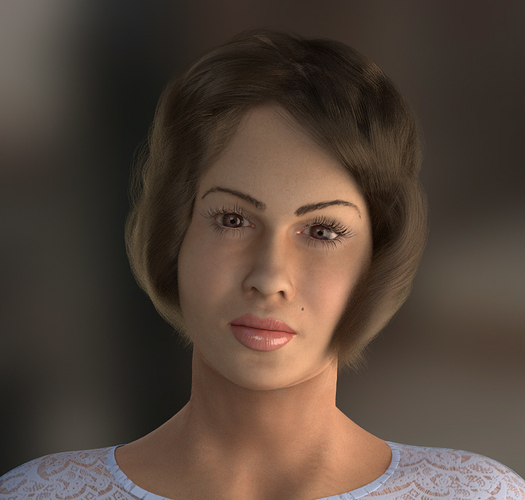 You have made a big improvement on the eye brows. In some ways I think the eyelashes are too long.

Just curious, what things would you do different on your skin shader if you wanted to make a Hispanic looking woman?

That sounds like a good excuse for a skin tone test! I’m organizing the shader into groups with inputs now, and the top two inputs are going to the main skin tone, and the highlight tone. The shader calculates the difference between the averages of the color map and adjusts it to match the inputs, I’m still fiddling with the math for the highlights.

As for hispanic, it can mean so many things. I would note that makehuman has no controls for hispanic features, only asian, african, and caucasian. I used to live in argentina (large spanish influence), and I have been to spain a few times, and it’s just hard to put a generalization on the features or tone in the way that is more possible with african, asian, and caucasian skin.

Overall I guess the skin is slightly darker (but barely). There is sometimes (but not in penelope cruz) a rounder bulbous jaw. I actually rounded out the jaw in this render. Now there is a definitinitve look of an indiginous mexican. This is sometimes confused with hispanic, but really has absolutely nothing to do with it.

I looked over the eyelashes and you are right again. I made smaller overall, and made the lower ones much thinner.

Anyway here is a test using the default baseline colors, and colors copied from penelope cruz. Identical lighting/hair in both.

My project I’m privately working on is about, not ever using Make-Human! Ha ha but I’m really loving your thread

^^ Keep going!!! You can do anything! wow look at the difference with the skin already improved :D:p

I’ve used makehuman fully for a 30-minute short film called “Theevan” a few years ago and the reaction from viewers though was less than favorable (although that film did have more flaws than just the characters). I’m not sure what it is, but the main feedback I received was that the characters looked too CG-ish and not very appealing looks-wise. This is something I wished makehuman would look into, a feature that would allow us to create a more stylistic look to the character rather than realistic. Also, clothing (at the time) tended to go through the skin or just had strange pinching effects and was not very easy to customize (not sure about now though). I still love makehuman though. I especially love the animation controls and the motion capture features, this really helped speed up my workflow.

From what I can see here though, this probably has to be one of the best renderings I’ve seen with makehuman. The eyes, skin, hair all look great! Even the wetness in the lips look awesome! I think it would be a good idea to create skin assets for it. I just might get into using it again if it can produce results like this!

Ok, fair enough. Thanks for the compliment.

I probably will release the shaders and assets. I’m at the point that after exporting the mhx I can have the entire scene looking as above in about 7 minutes.

Resculpted the normals for lips. Lips are now the only thing using a normal map, everything else is bump. Changed the pore procedurals some, rewired the spec for more procedural influence.

I may take a short break on this, I’m at the point where I can’t tell where the valley ends. 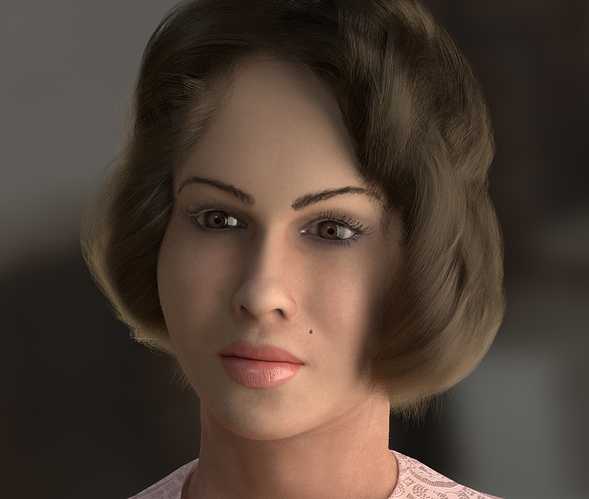