I’ve been working on a rather heavily displaced scene and I was struck by the differences in render time I was getting on our M1 systems vs the PC with GPU.

Ordinarily, we do most of our design on the Intel Macs, then transfer to PCs for rendering. This has held true for the M1’s as without a GPU, the PC’s generally still spanked the M1’s for render time… though the M1’s were talking back from time to time.

For this micropoly displacement scene, the M1’s blazed through where the PC’s couldn’t. This seems to underscore how heavily the PC’s are dependent on the GPU’s. For this scene, the PC’s were not only slower to build the render, but the GPU failed entirely with an ‘out of memory’ error after 37 minutes. Switching Blender to CPU compute allowed the PC to complete the render, but much slower that the Apple Silicon.

Not trying to start a flame-war… we use both platforms, and if I could get my hands on a 3090… I’d happily build a new PC, but for these types of heavy scenes, the MAC is now the only viable design and render channel in our studio.

Note: The image is tightly cropped from the original 2080x2080 resolution full image. Just wanted to show the type of details we’re dealing with. 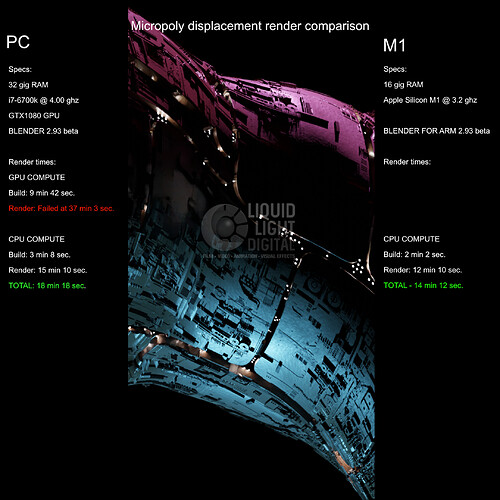 No surprise there if one looks at CPU benchmarks (https://www.cpubenchmark.net/high_end_cpus.html) one can compare these CPU’s. Each M1 core is faster than each i7-6700K core and you have twice as many (real cores)! So yes it will run faster. Will get faster I imagine once the M1 Blender builds get better optimized over time. If you care about wattage the M1 can’t be beat.

Looks like you may need to bump up your virtual memory on your PC (assuming Windows) which should help your GPU use of virtual ram also. For more info see: Blender Randomly closing - #2 by pxlpaul 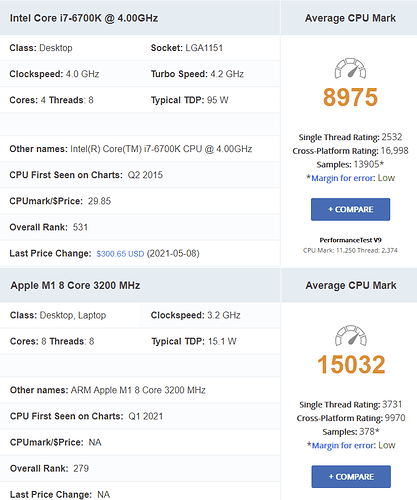 Thanks for the tip on the virtual memory. Don’t know if that would speed up the build time though… it took almost 10 minutes for the PC blender to build the scene and shunt it to the GPU… so even if the GPU could complete the render it would still take way longer than the M1, no?

Interesting. I think this is the first time I’ve heard that removing Macs from your pipeline would slow down or, in this case, destroy your ability to get work done. Curious though, why did you design on Intel Macs when you already had PCs which are considered to have more bang for the buck?

Primarily the interface and color accuracy. We have design monitors on our Macs, so for design its a no brainer. Now that the Apple Silicon is here, looks like there’ll come a time when we can stay on Mac through the whole pipeline.

Sounds like a winner. I’m in the market for a new Mac but have been hesitant with all the talk about Macs not being suitable for 3d. Good to hear people having success with them in their pipeline

FWIW – 100% Mac based here, my entire pipeline. Been working in VFX and CG for about a decade now and I’ve always been able to get what I needed to get done in C4D, Houdini and now Blender using Octane, Redshift, Arnold, 3Delight and now Cycles and EEVEE.

Sounds like a winner. I’m in the market for a new Mac but have been hesitant with all the talk about Macs not being suitable for 3d.

That is a pretty problematic point.

Some software does not work on macOS like Revit, Alias, 3D Max or NVIDIA GPUs and CUDA for newer systems.

Thats is why I still rock two old 2012 MacPro with macOS and Win10.

But this M1 mac mini CPU wise is brilliant. Low heat, no noise, and a CPU performance better than those old 12 core xeon macs.

GPU is a quite different story - here for logical reason such a system cannot compete with a dedicated 200 WATT GPU.

I do now 95% of my work on the mac Mini and only for GPU rendering fire up the win10 Mac.
And also there recently the new NVIDIA drivers do not allow Cycles to use both GTX 1070 Ti.

So on windows not all is rosy either.

It’s true the M1’s can’t compete with a GPU equipped PC. It’s a mixed bag. Hence why I said we do our design on Macs and rendering on PC’s. The M1 is faster when designing flip fluid simulations, for example. So once we’ve got the fluid behaving as we’d like, we’ll save the cache to to network drive and load it up on a PC for rendering.

Sculpting the fluid would be much slower on our i7 PC’s as it’s a CPU task and has nothing to do with the GPU.

hi
can you give me link where i can read about this?

I’ve gotten used to certain apps not working on Mac. I tend to just shrug my shoulders and move on.

Wish I’d picked up a used Mac Pro a couple years ago when it still made sense. I’ve been in graphic design for the last 30 years and Blender is just part of my workflow. Hard to believe a Mini could be a functional, or even superior rig for my 3d and 2D needs.

hi
can you give me link where i can read about this?

I was skeptical myself

I could see in photography a super pc being amazing