Sighs… was a lil sad when I seen a few of the recent revolver post so decided to hold off awhile before posting. Thought I was being original

Anyways I been working on a model for a game engine. Its a little poly heavy but figured should be ok for a FPS…

Has 1854 polys and think Im just about done with the construction but might go in and try to reduce the poly count a little still.

Figured Id post here for a little C&C before I start unwrapping and texturing it. 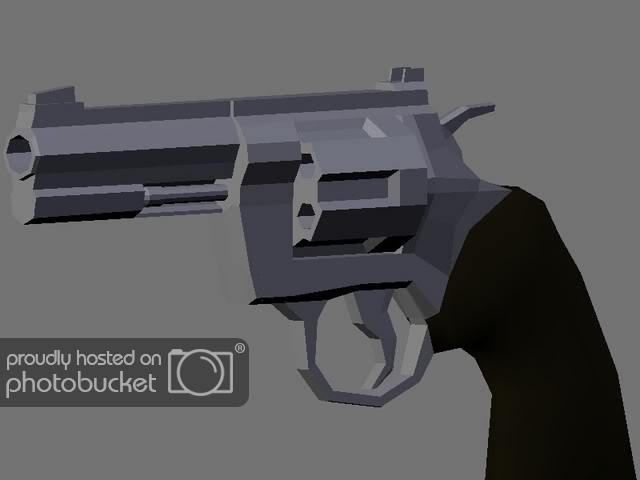 An early animation test as well

Can I see some wires?

Thanks for replying. I admit the poly count is a little high but personally wouldnt go as far as saying horrible. I looked around and most of the guns Ive found ranged between 800-1500 polys. The ones I had found below ussually looked very blocky and tended to look like they were created for playstation or nintendo 64… as well as some of the ones that were in the 800-1000 poly range.

Ive posted this on a game engine forum and with 39 replys havent heard one comment as to the poly count being too high. I do plan on optimizing the mesh a little more however. I noticed a few areas where I could probally cut down with little or no change to the overall shape.

I plan to also create a few lods for it as well. Tho these might not be animated and intended more for pickups or possibly enemy use.Note that is intended as a fps weapon so the poly count can be higher since you will not be seeing the character.

From my experience as a FPS / TPA moder / dev, your first model was very well done. This second one is well constructed, but a little “lean” graphics wise for modern engines. (Hope you saved the first model as it’s quite useable in games.)