Hey all, I had a nice long OP typed out for this, but I guess wordfilter caught me, and I will never see that thread again. So I’ll make this OP short.

I love all the characters in Legend of Zelda: Twilight Princess, it has some of the most creative character modelingthat the Wii could handle

Since I r newb, I figured Midna would be a good fit for my first model that I didn’t do from a tutorial (personal favorite charactar, hence the username ;))

Since I have barely done the body, I’ll just post some screenshots for now.

EDIT: Alright, now that I know the thread will go through, I’ll put a bit more detail into the OP.

First challenge with this was finding reference images. Namely the fact that none exist. Figured this wouldn’t be enough to stop me, so I searched for any 3D renders, and found that one guy had modeled her in Maya. (One guy has a model in Blender, but it is ripped from an emulator, so I’m still being original here!) Anyhow, he had two videos on Youtube, both were flyarounds of the model. I went to the video that was on the closest thing to side view I could get, and took screens of the front and left. Lo and behold, they didn’t match up. At all. So I took them into GIMP and played with proportions for an hour or two until all but the head and hands matched. I modeled the body from the feet up, and an pretty happy with the result so far. Modeled the arms mostly from looking at the game, as I had no top or side view for them (also, notice how the Maya guy didn’t include spikes, so I did those completly by hand.) If anybody sees anything that needs work, please tell me before I screw it up further, I would really like this model to turn out well.

What I plan to do:
Softbodies
Texturing
Hands (what I’m working on now)
Head
Shield
Rigging
Eyes (if anyone could tell me how to do these kind of eyes, please tell me, as I have no idea.)

Trying to document everything I do, hence the long OP. If you’ve gotten this far, Thanks for reading, and please post any suggestions you may have! 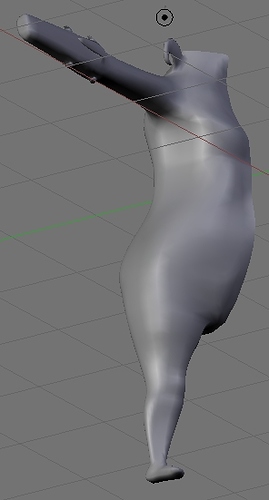 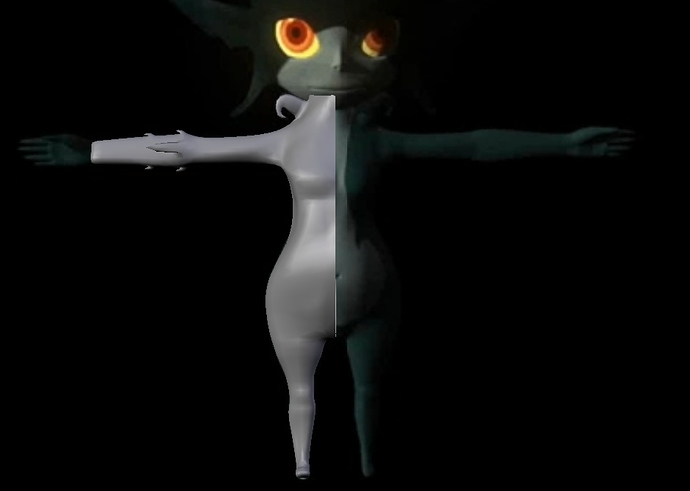 That is a great start - I hope blender provides you as much as an adventure as the game of Zelda!

Welcome on Board and look forward to your completed work!

That is a great start - I hope blender provides you as much as an adventure as the game of Zelda!

Welcome on Board and look forward to your completed work!

Thanks for the support! I’m not exactly a newb here, I have been lurking moar and following tutorials here for a while. This is just the first thing I have tried to do by myself, without following a tutorial. Oh, and Zelda is still providing me adventures to this day. You can always improve on a speedrun, and you can always improve in Blender. So I am optimistic

I already took it into sculpt mode and smoothed it out, where exactly do you think they need to be smoothed? I’m not too worried about the over-all look (most of that will come out with texturing,) but if anything will seriously effect animation, that is what I want to know about. If I have time tonight, I’ll try to get some work done on the hands.

Alright, decided to put off the rest of my work (i.e. stay up really, really late doing a bio write up…) and do the hands. I already had a stock hand I modeled a while back, so I decided to remove a few edge loops (I am trying to keep this model at a poly count that won’t break my PC) and converted it for Midna’s hand. I think I will have to do some redesign in the space between her fingers, but that will only add a few quads. Yes, by the way, I did have to finally give her some tris

But I tried (tee hee) to keep them in places where they wouldn’t effect animation. I think I’ll mirror the body and render it after I finish the hands. Not aiming for perfection here, really just practice before I try to start making an actual movie (started modeling, thought, “Damn this is hard, I need practice!”) The movie will be very cool looking, already got most of it thought out (if you have seen that “hotels.com” commercial where everything is red/yellow/orange, that is kind of what it will look like.) And I plan to use Suicidator for it… but back on topic, here are a few screens I just got of the hands

Again, just about everyone here has something they can teach me, so if you see something that needs changing on the model, let me know! 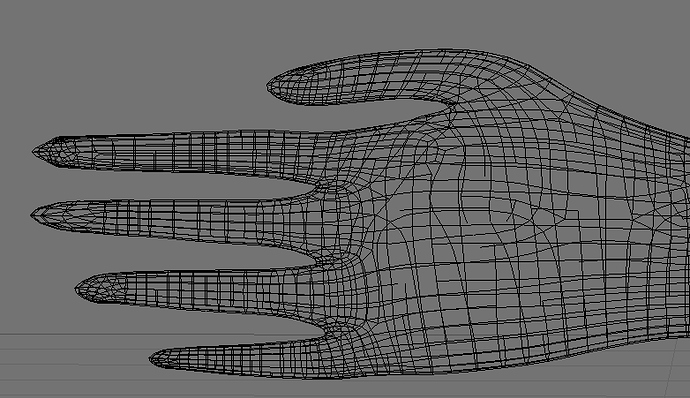 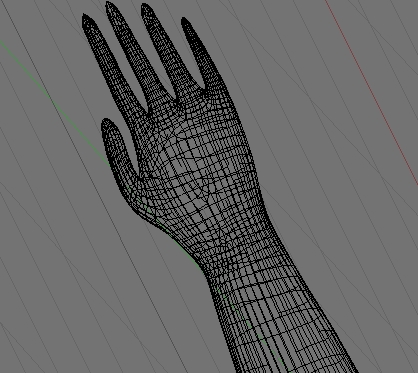 Alright, this part I have been dreading. I always seem to do something wrong that causes the black line down the middle when I duplicate/mirror/fill(or merge) any character model. I hear it is a problem with normals, and doesn’t actually effect the render, but it gets on my nerves. If anyone could please tell me how to fix this seam thing, let me know.

P.S. The line isn’t exactly down the middle, it is off to the left. When I originally filled the middle faces, I made a new edge loop between the old two and deleting the old two, right one first. Before I deleted the loops, it was in the middle, after I deleted the right (right for Midna, left from front view) it went to where the old loop was.

I think this is all I will do for this model for tonight, got to practice guitar :RocknRoll: Any help will make this project move along much quicker. 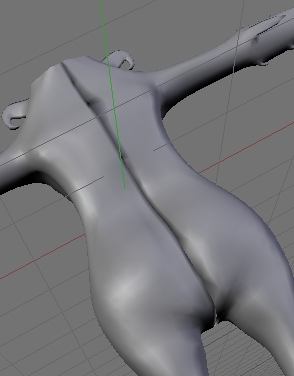 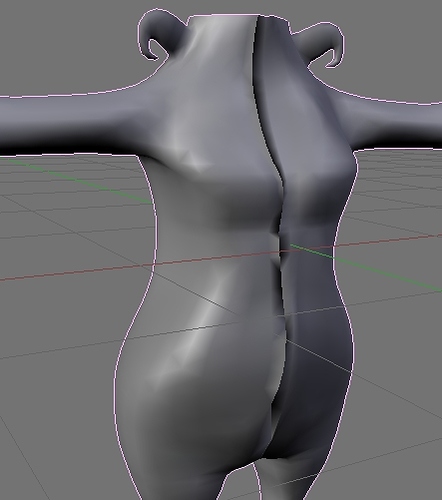 I think you need to back up to before you added your mirror. To mirror properly you need to have a clean edge loop perfectly aligned on an axis, X is default. Your mirror modifier needs to be above the subsurf modifier in the stack, just move it up with the arrow ^. Select your clean edge loop and do Shift-S Cursor to Selection, this will put the 3D cursor in the exact center of your clean edge. Then tab out of edit mode, and press Center Cursor (under Mesh in Editing Context) to place your object’s center at the cursor. Next time turn the mirror on before you start modeling!

To recalculate Normals in Edit mode CTRL A to select all then CTRL N.

N00BIE, I never really cared for mirror modifier for some reason, gets a bit distracing while modeling. I duplicate it, mirror it, move it over, and fill edges. I will try the recalculating normals trick, thanks to both of you who posted

EDIT: Worked like a charm, thank you both! I’ll get some finishing touches done on the body tomorrow, then try to get started on the head.

The problem is probably because of the hierarchy present in modifiers. This problem tends to be a huge mistake for beginners.

If you had the order like so:
-Mirror
-Subsurf

It would first mirror properly, then it will subsurf the entire thing correctly.

I hope this sort of makes sense.

You can hide the effects of the mirror if you want.(Buttons next to the name of the modifier in the Modifier panel)

That way you don’t have to see the mirror, and you save yourself the trouble of duplicating and flipping and filling and tinkering.

you probably did not do clipping when you used the mirror modifier.

Was there ever a time when people read threads before posting advice? I used the subsurf modifier, and that is it. And the problem is solved. I couldn’t use my laptop for a few days, and was too depressed to move on the day that I could, so no work has been done on this. I’ll pick up the modeling after I pick up my mood a bit.

Actually, I tried to get some work done, but when I tried to split the window, I hit “Join” to the buttons window. So I split it back, moved the headers, and found my edit window all screwed up. Zoomed in and out, clicked, it is pretty much unusable. Is there any way to reset the windows, or should I just append it to a new file? 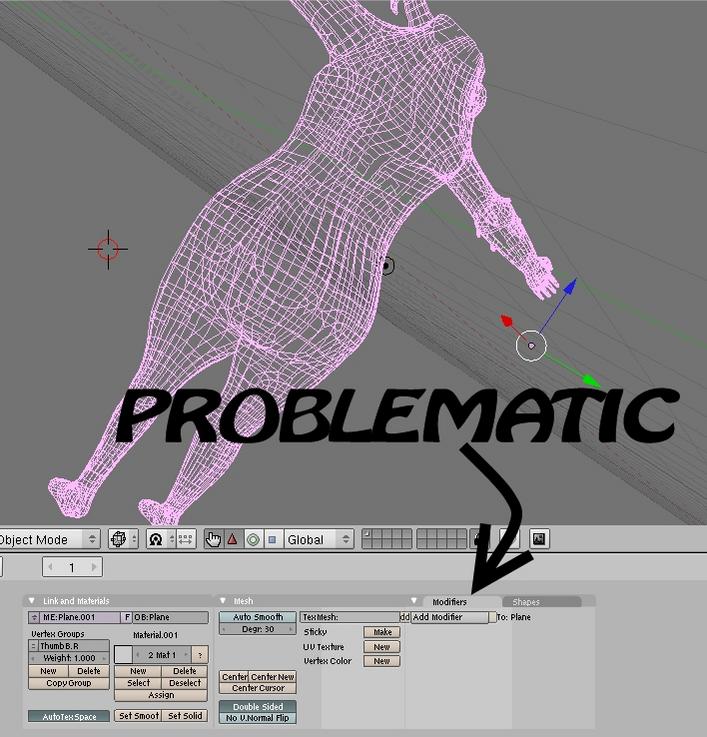 just click and drag on the modifier tab to bring it out.

Guess what, I’m back! Alright, I was gone for the majority of the summer because I decided to get in shape, go do things, vacation

Anyways, I only touched blender a few times, and didn’t get much done. But I finally decided to pick this model back up. I think I did the head 5 different times in the last 48 hours, this one worked (well, for now, still have to attach it to the body!) Oh, and I finally figured out I just had to automatically reallign the buttons window. So now it is set up a bit weird, but it works enough. Okay, back to the model (sorry if this post makes no sense, I got 5 hours of sleep last night and its midnight again…) the corners of the mouth are screwed up, and I don’t know how to fix it. Namely, there is a hole next to the mouth that shouldn’t be there. If anyone wants to open up the .blend file and take a look, it would be much appreciated. By the way, I’m still trying to fix the area between the mouth and nose (I modeled the head as if it was a human’s with some editing, and the only real problem was the fact that the only way I know to model a head makes the lips look big.) Aside from those few little flaws, I just have to model the eyes/teeth (teeth will be hard… very hard. I have no reference at all except memory. And no idea how to model teeth.) I may do the helmet at some point, but I’m going to do everything I possibly can with the body first. Rigging, texturing, everything. Speaking of which, I’m going to have no idea how to rig the eyelids. Anyone got any links with tips? I know BlenderMag has a few rigging tutorials dealing with action constraints, maybe I’ll just look through those. Can’t wait for 2.50, I saw on Blender’s page that it would be getting an endomorph-like feature, I think. That will certainly make these riggings easier. Well, I’m off to bed, thanks in advance to anyone who takes a look at that mouth!

Select all the vertices of the corner of the mouth, w -> smooth

Repeat the smooth several times, scale in the x and z direction as needed.