I’ve been using Blender 2.4xx, 2.5xx versions and Gimp 2.x off n on for a few years, I always try too donate when funds allow to support the opensource dev community (bow downs), much respect !!!:

I purchased a Google Nexus 7 tablet as a testing device (a christmas present to self heh !!!) last year, the current gen Galaxy phones/tablets are waaay outa my price range $900AUD + the NEX 7 was $290AUD bargain !!!, as mentioned my modeling skills need work - from online tutes n stuff I’ve managed to model a low poly Abrams M1A1 main battle tank for an open world level made famous in the 1991 Iraq invasion by coalition forces “Desert Storm”:

To even attempt a complex mechanical game asset - I followed Greg Zaal’s @blendernerd.com vid tute “create tank tracks in blender” and picked apart his .blend tank example to get some tips on how it was made @blendswap huge thanks Greg (more bow downs):

Anyways here are some screens of my completed mesh approx 9600 face count in solid and wireframe perspective mode - my mouse hand was locked solid like an miss - shapened hobbit’s foot OUCH !!! over the period of days it took to create this object - I wonder is there a peripheral other than a mouse that makes modeling a bit easier ???: 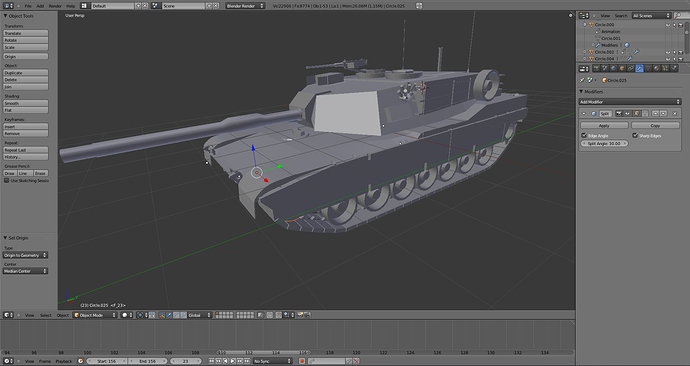 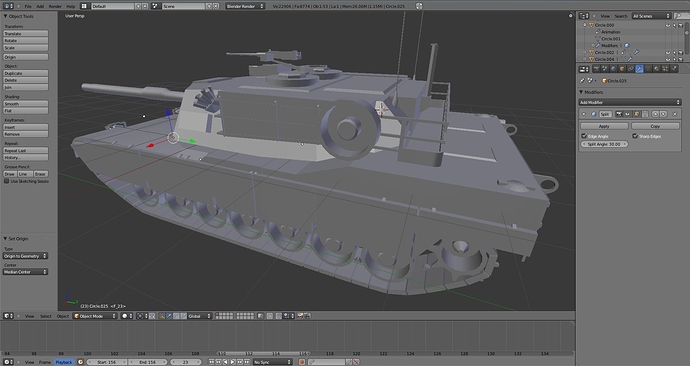 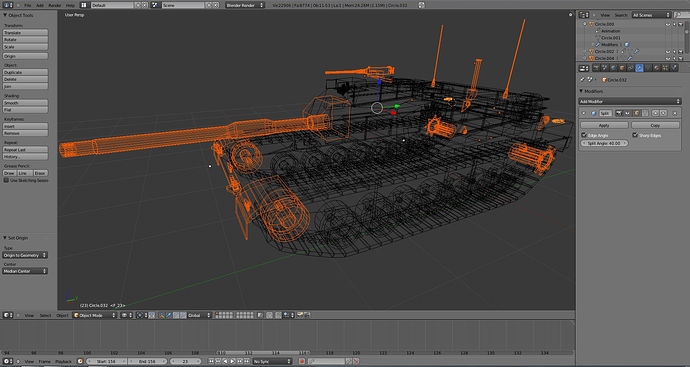 The mesh was created using basic modeling + modifiers “edgesplit and curve” at this stage I’m not sure which method to UV map the mesh - whether to unwrap the mesh subsets separately eg: light clusters, road wheels, turret and hull etc, or the entire mesh complete, any advice, tips or crits welcome

Thanks for your reply - I thought thats what I had to do given its complexity - got carried away with Gregs example heh… will update further when color, spec and normals finished - also heres a render screen its a bit raw I apologise for that was in a hurry: 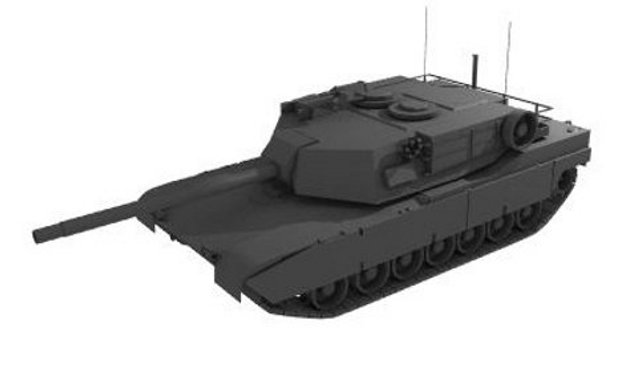 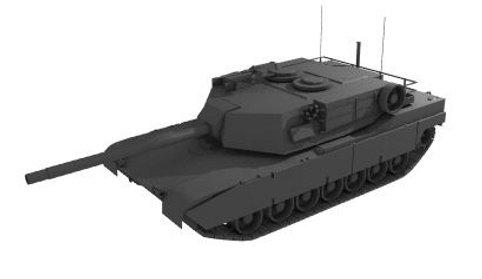 When UV mapping the model I noticed the tracks had re-aligned themselves along the Bezier curves
perpendicular to the Z & Y axis which I had not noticed before when I first modeled the mesh some weeks back weird! 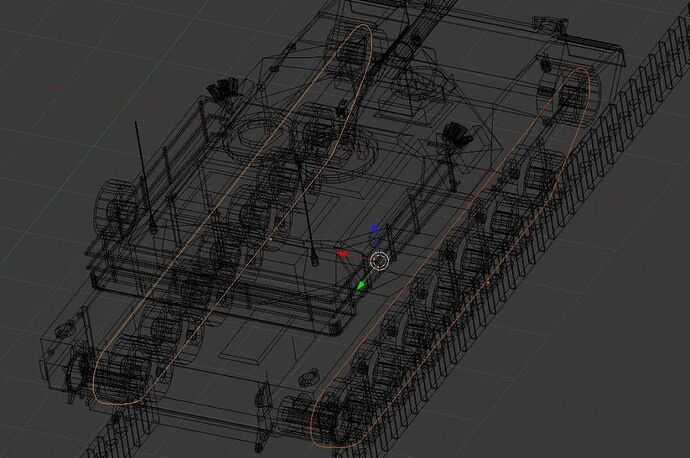 I recall modifying the Array step when notice the pivot points are offset by 3.5 bender units from the main geometry - will post a solution

Just a quick update - Here some screens I rendered using one of @Ira Krakow’s excellent tutorials on Ambient Occlusion - amazing FXs! that can achieved other than rough basic renders as novice I’ve created up till now:
http://www.youtube.com/watch?v=rKUAemD7oo4
The screens are rendered using default settings - with one change in the world panel when Ambient Occlusion checked I increased Samples: to 15: 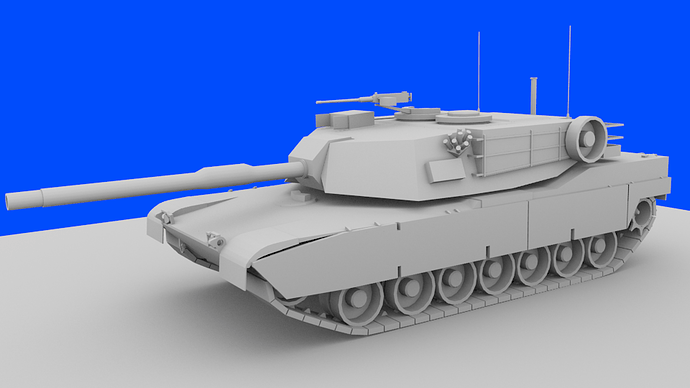 As this project progresses it brings into sharp focus how challenging DCC workflow can become in resolving issues in design, modeling, texturing etc - as an example: parts of the model are non-manifold as the screen illustrates: 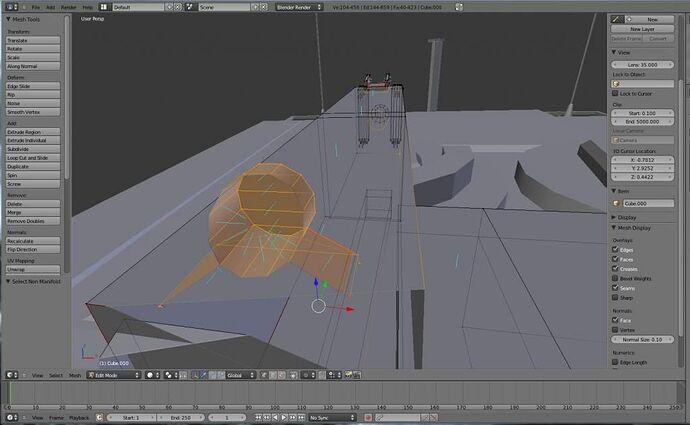 and as a consequence cannot be textured - however a search hit this tutorial “Fixing a non-manifold mesh” by @DJ Barney:
http://stargate.djbarney.org/node/79

for the 2.5a beta interface is just what the “doctor ordered” that is if nothing else crops up - that said learning different techs, workarounds and/or tips as a beginner in my opinion is good experience that I hope will translate to publishing work that will reflect that - anyways will continue to update further.

Edit: If anyone has a different method or workaround please post a reply thanks

Its taken me a few days to sort out the modeling problems & I’ve managed to find solutions to both:
Firstly a non-manifold mesh as described in this link:
http://blenderunderground.com/forums/viewtopic.php?f=12&t=3431

Caused by edges connected to 2 or more faces - but in this case I think the problem was the blender 2.56a 32bit I was running! - the system I’m using to develop this project is a custom build I completed recently a [WIN 7 64bit - Intel core i5 3570 CPUI - AMD 7800 GPU with 16GBs of RAM] the image shows a manifold mesh with the blue lines pointing in the right directions: 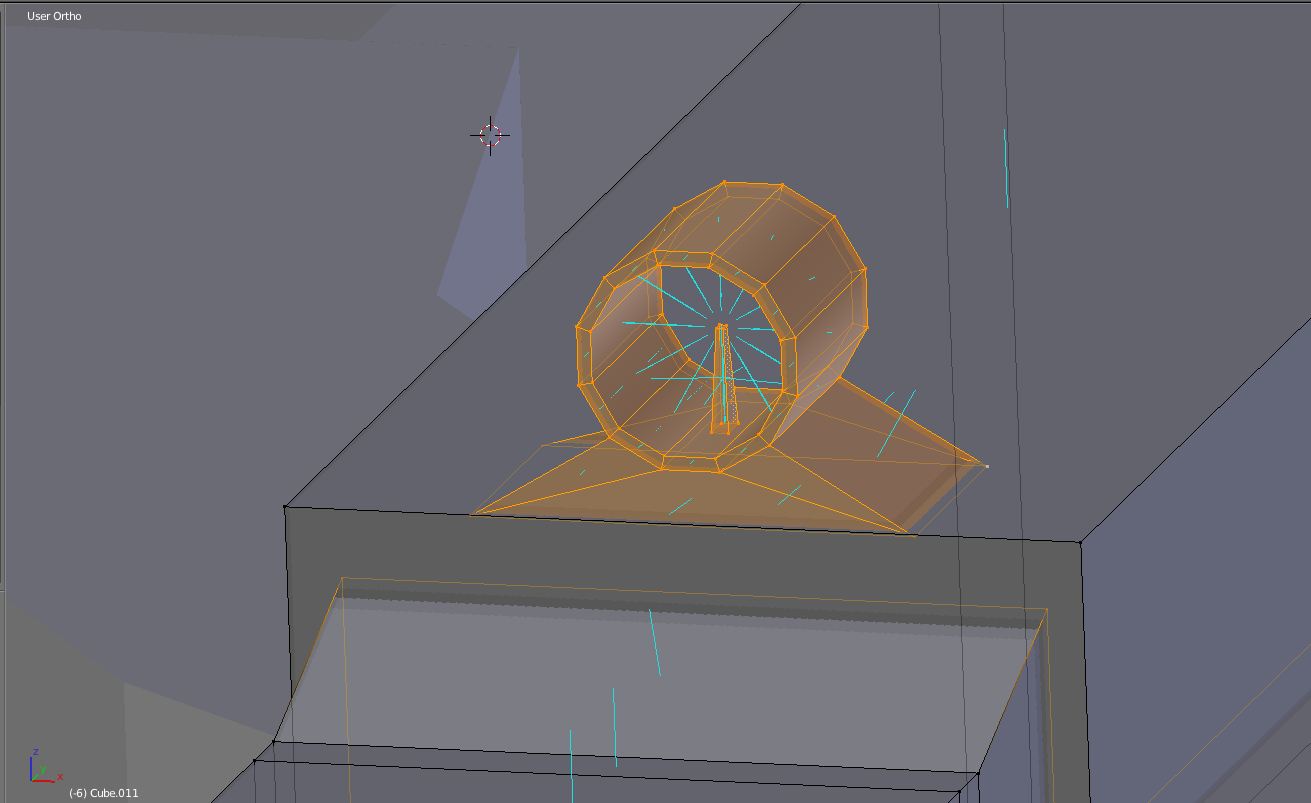 I forgot to update blender to x64 doh… I’m now using 2.59 x64 which is a bit more stable with less lag hmmm… might troubleshoot that: anyways the second issue with the weird displacement of the tracks in edit mode [took 2 days to figure that one out] - solution! simply select both the track mesh & bezier curve then tab to edit as displayed below: 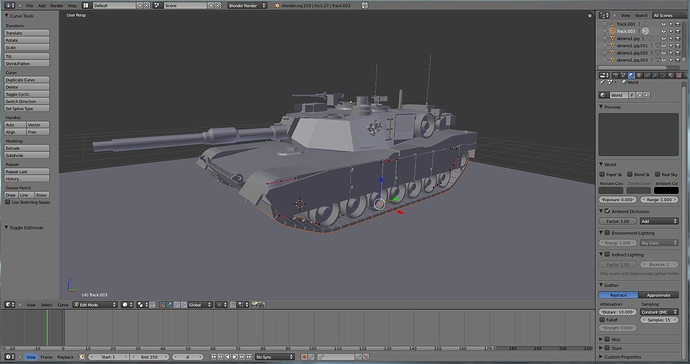 I also did a bit of a design rethink of the original mesh which in my opinion looked generic so I’ve added some detail eg: ammo boxes, jerry cans, gunner’s MG and other nic - nac’s etc - I think the mods add a more “battle wary or veteran look/feel” to the object as screen shot shows: 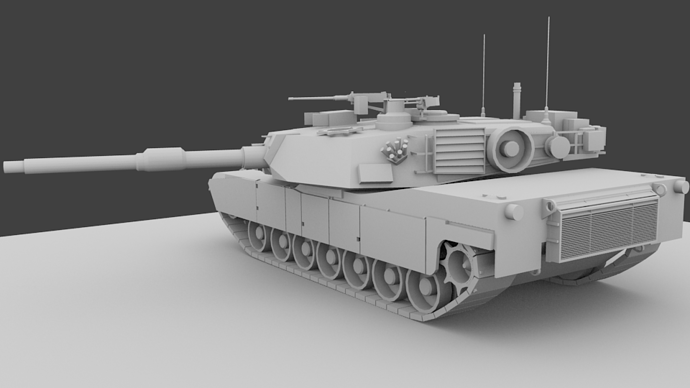 I recieved sound advice on another forum where I’m running a similar thread to enable wider community input/support thru the development life cycle - that is to provide a download link to the content created allowing interested user’s to experiement and maybe provide help to problems when they occur:

I’ve provided the link in the starter post that will be updated as progress continues:

Also all content created during the course of this project is made available to anyone for commercial and/or personal use - hopefully I’ll be be adding other game assets eg: characters, vehicles, environments as I learn CG art and DCC methodologies.

A quick update - finishing final touches to the mesh, been playing with the Bevel modifier: [settings between 0.0030 to 0.0380 width]

As this object has many hard surfaces I thought beveling the edges would, add a sense of realism to the tank’s overall “coolness” factor for the player in terms of the look of its steel exterior ingame or badass heavy metal made in the USA rep: 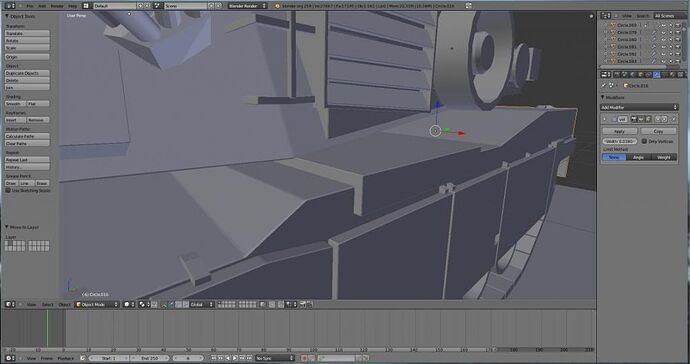 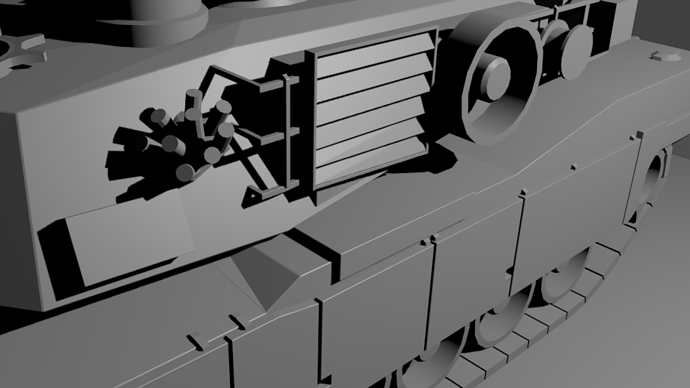 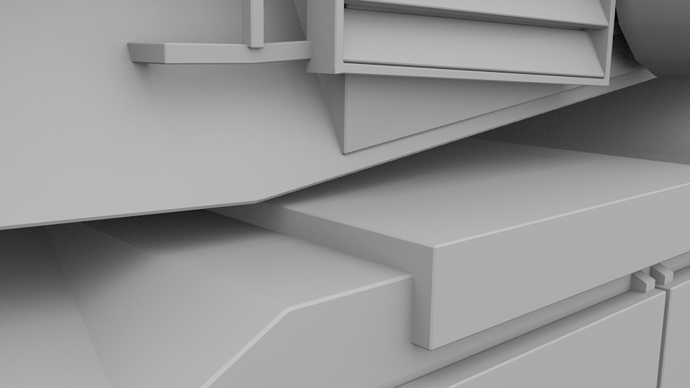 My previous work had never progressed beyond unwrapping so textures is breaking new ground for me - I’ve updated the .blend file check it out:

Thought I’d give you a more detailed overview in reference to this project - when I intitially decided to develop this game to completion I kind’ve jumped in head first with the realization that this will take a ‘bloody long time’ to finish & I think push the engine parametres to the max:

basically this is my art pipline:

This game fingers crossed will eventually ship to the Android app store specifically targeting Google’s Nexus 7 [ASUS] tablet with Nvidia’s Tegra3 - 4 core chip which in my opinion has the necessary grunt todo the heavy lifting:

My reasoning for throwing as much detail at the tank that can hopefully stick is first hand knowlege and the target audience - I’m ex military having served with the 2nd Cavalry Armoured Reconnaissance Regiment “2 Cav” during the eighties & early nineties in the Australian Army as a MRV [Medium Reconnaissance Vehicle] Crew Commander M1113A1 “Scorpian” turret variant & Assault Trooper [glorified Infantryman eg: “Vegie”]

NOTE: The pics are from Google Images & are NOT examples of my work simply as a reference guide
for the vehicle type I commanded as a serving soldier in that particular armoured unit

I served with A Squadron 1 troop - tactical vehicle markings are read [left to right]:

a) The 2 denotes squadron ie: B

An example how this “callsign” is transmitted over either the Regimental or Squadron radio nets, transcript as follows: 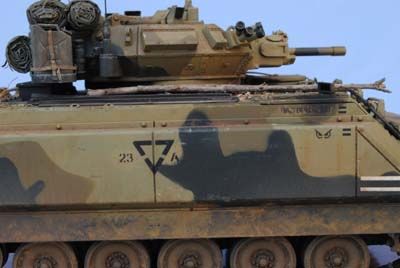 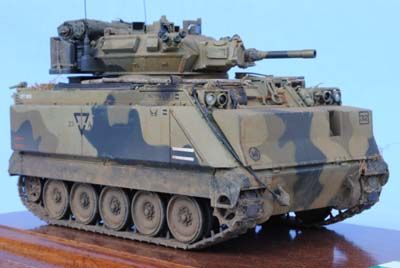 Note the equipment stowage rear of turret & the cut to length tree saplings which are used to deploy the vehicle camoflage netting when on exercise and/or operations from this experience in AFV prep for going “bushbashing” I’ve tried to instill some of it in my modeling of the Abrams:

Ever since Apple opened its app store in 2007/8 allowing indie developers to port their creations I’ve wanted to enter the casual mobile gaming space - now time & circumstance has enabled me to do so:

The game is tentatively based around an armoured formation gone “rogue” or offline - set in the near future where world affairs are governed by vested Military/Industrial entities/conglomerates and the democratic rule of law has ceased to exist:

This cadre of battle hardened soldiers disenchanted with the MI Consortium their ruthless methods & barbarity to subdue entire poplances - try to return home to family and loved ones - all the while in combat against the odds:

This link displays the US Army’s 3rd ID “thunder run” into Bagdad 2003 - & others illustrate the “immersive” factor I’m trying to create for this project: 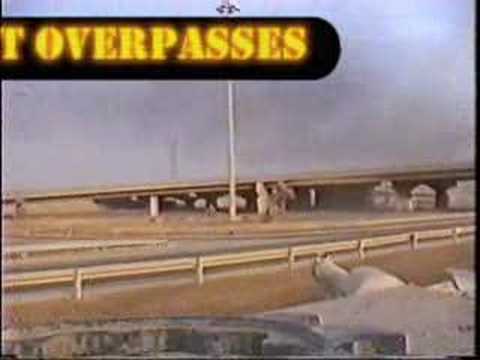 I have handled similar light to heavy cal weapons that will be ingame, the sound n ‘feel’ I hope to create will retain players which is the primary focus not downloads:

Today’s mobile gamer demand quality in performance, graphics, & I think immersive gameplay which I’m working towards - it is a single player first/third person shooter in both dismounted & vehicle mode on one level with 10 missions:

The first published iteration will be a Free or lite Premium version [no in-app purchases or micro-transactions] the second will be a paid full version with again no mirco or inapp purchases:

Whew…! yeah! a horrendous amount of work I’ve set myself but as a first time effort in my opinion passion counts for 40% the rest shear persistance anyways thats it for now will update soonest:

P.S [sorry for the long post if you managed to get this far & well done]