Hello! I wanted to share my most recent project with you, along with some info on how it was made. My goal was to mix two different games, Minecraft and Atom Zombie Smasher, into one video. Here is the teaser trailer:

First, I’d like to thank two people who helped me on this project, Patrick W. Crawford and Jesse Cornett, for contributing their time and skill. Patrick created the run cycles of the zombies, and Jesse provided the voice over for the trailer.
Patrick creates incredible animations, as well as some great Blender add-ons. You can find his channel here.
Jesse is an immensely talented voice actor, who also contributes often to Chilling Tales for Dark Nights. His website can be found here.

Most of the effects in the video were pretty straight forward: some shots required camera tracking, chrome balls were shot to capture HDR lighting, and I composited everything in After Effects. There was one shot that required a little thought about how to produce, however, and that was the puddle shot. I’ll talk about this shot in depth down below. 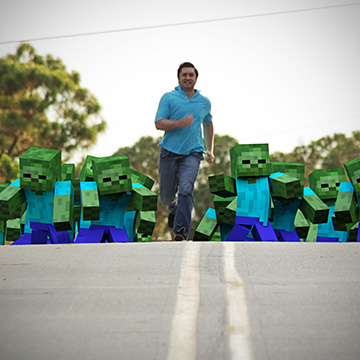 Initially, I shot a puddle and thought I would just composite the reflections of the zombies over top of the water, but that ended up looking unnatural. I realized this was because the reflection, while important, is not all we see; when a subject obscures the reflection of the sky on the surface of the puddle, we’re also seeing through the water straight to the pavement. Therefore, it becomes necessary to shoot not one but two background plates: one image as the camera normally sees it, and one image where all reflections on the puddle are blocked.

I chose to do this by holding a large black foamcore board and recording video of me moving it around in front of the puddle, in order to get the reflection of the black board to show up everywhere my subject’s reflection would be hitting. I then brought this video into After Effects and masked out various frames in order to create one large area of “non-reflection”. You could try using a polarizing filter, but it might not remove as much reflection as this technique. It’s worth experimenting with, though. 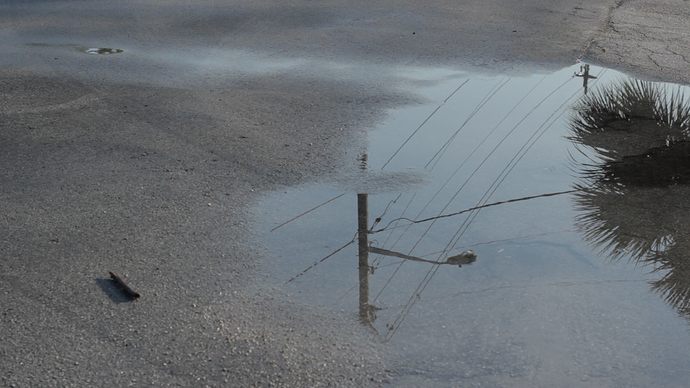 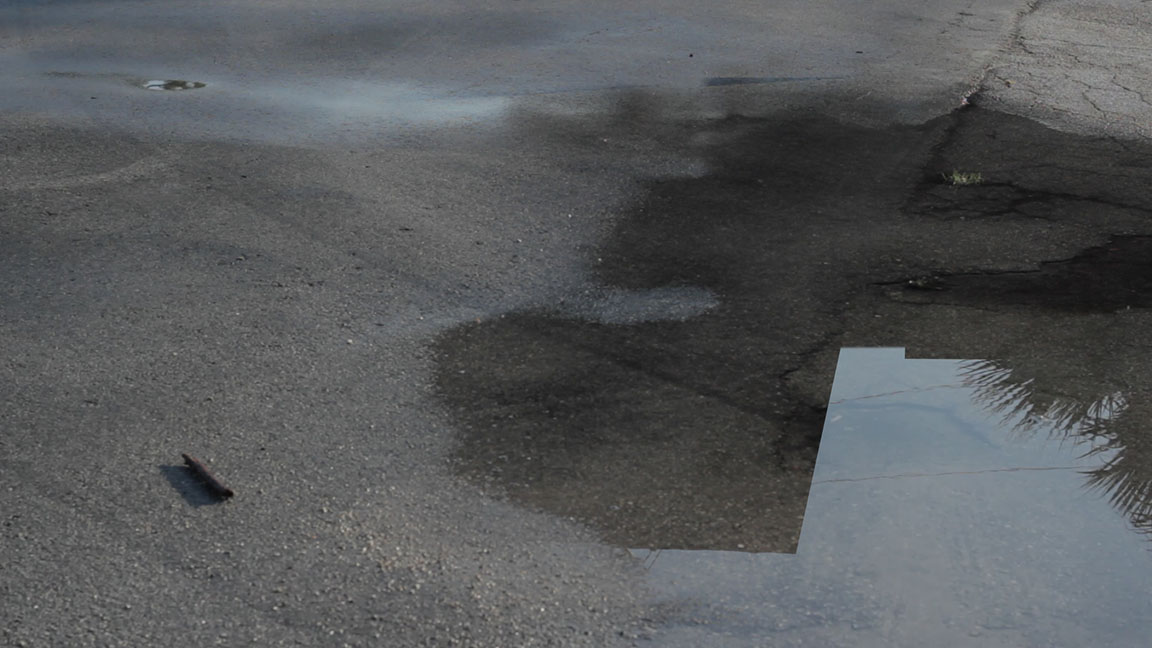 Now we have the building blocks for out scene, one normal puddle image and one “reflectionless” puddle image. This will give you all the information you need for compositing your various zombie passes. However, we still have another challenge, and that is to create a convincing CG puddle. Not only do we need to define where the puddle begins and ends, but also how reflective it is. The middle of the puddle will be a completely sharp reflection, but on the edges of the puddle, things need to become less reflective and less specular. My method isn’t completely realistic, but I believe it’s close enough for VFX purposes.

In Photoshop, I placed my two puddle images on separate layers, with the “reflectionless” image on top, and set it’s blend mode to “difference”. Then I painted out the telephone poles in the normal image, added a black and white filter on top over everything, and finally some curves adjustments to create a contrast that looked good for my Blender shaders. It took a little trial and error to find a result I liked.

Once I had a black and white mask I was happy with, I applied it to my puddle plane in Blender (using “project from view” UV mapping), and then set up my nodes. Here is the final material setup: 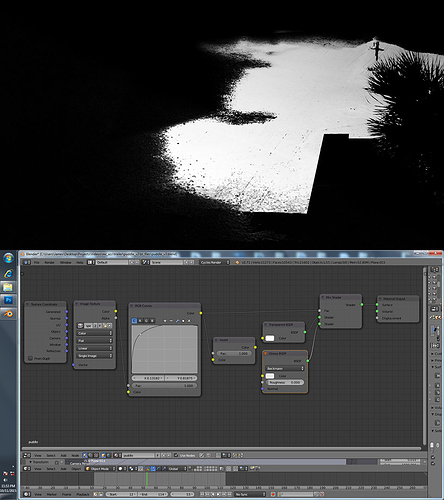 Compositing in After Effect was straight forward, since I had also shot reference video of myself walking in front of the puddle. I feel this technique allowed for much better results than would have been possible if I’d tried painting a puddle mask by hand, and in much less time. Unfortunately, if your shot requires a moving camera, you’ll have to come up with a more robust solution.

Phew! If you’ve read this far, you’re a trooper. If you have any questions about how I did something, just ask and I’ll be happy to answer them in detail! The full “Minecraft & Atom Zombie Smasher” movie will be out early next year, but first I’m finishing up some other projects. The next one will be another GTA video, and I have high hopes for it. Thanks for reading, and stay tuned to Classy Dog!

Wonderful work, James, as I said already in your WIP thread. It is huge fun to watch this trailer. Congratulations.

And thanks for the detailed explanation of the puddle workflow.

This is really nice and as minoribus said, a lot of fun to watch, just one thing though, do those Zombies get you or do you get away?

Nice compositing on this video James… I kind of favor the shot where they run by trees. Just curious, what method did you use to animate the minecraft dudes? I know your friend did the run cycle, but did you use follow paths or some other technique?

minoribus - Thank you again, minoribus! I actually just noticed that I left out the roughness input for the puddle material nodes; here is the corrected setup: 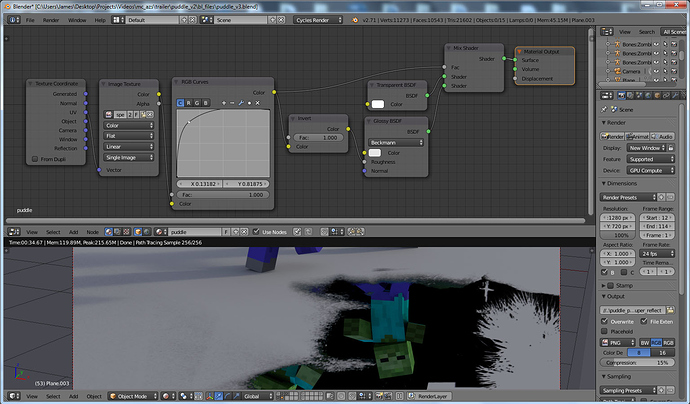 speed7 - Thanks, Shaun! I left it ambiguous in this trailer, but in the final video I will manage to kill all the zombies.

harley - Thank you, harley! I like the tree shot as well, especially since it was the easiest one to complete! For the movement of the zombies, I used the Follow Path constraint on every shot except for the ending with the helicopter. For that, I used boids particles. Initially, I was going to use boids on the slow motion road shot as well, but I found that it’s just too hard to control them and get them to move in a tight group: they either want to run far away from each other and take forever to get anywhere, or they completely ignore each other and clip through themselves. Boids seem to work best with a big, open area. Although, even then they can be frustrating to work with. Sometimes they ignored collision objects in my scene, and sometimes they didn’t. Sometimes they knew where the ground plane was, and sometimes they didn’t. Luckily, there are so many zombies in that last shot, it’s hard to spot the ones that are buggy.

By the way, this is the tutorial I watched to learn about creating crowds with boids:

Nice work! I loved the puddle shot. Although after looking at BlenderGuru’s recent puddle tutorial you could have saved yourself the trouble and done it all in cycles.

Mir - Thank you! I’m delighted you enjoyed the trailer so much. I think you’ll really like our next video, by the way; it should be a step up in terms of quality.

David - Thanks! And you’re right, I was thinking the same thing to myself after seeing Andrew’s method! Although, this was also a bit of a test for future work; I wanted to see if I could replicate the specularity of a real world object, as I’m interested in finding methods to capture this data for scanning purposes as well. So it was a bit of R&D on the side, so to speak.

I recently struggled with Boids and used that tutorials… quickly learned like you a lot of things can go wrong… but they are fun to play around with for sure…that was the same tutorial I used…there is also a part 2. I finally used the follow path method.

Oh yes, part 2 is where I first learned to try animating a walk cycle (another thing I’d never done). Character animation turned out to be a lot trickier than I expected; even though Patrick created the actual walk cycles, I learned it wasn’t enough to just rely on his (excellent) work. Lots of other things like camera angles, character blocking, pacing, etc all contributed to how “alive” the characters felt on screen. There were plenty of instances where their actions didn’t feel as motivated as I would have liked, and I ended up redoing many shots to get a better result.

So I’m taking a break from CG characters for a while! Glad you were able to use the Follow Path method for your work, harley. Boids are certainly fun to play with, but hopefully later on down the line they will become a bit more controllable. It’d be great to have a crowd system like this one (Miarmy for Maya):