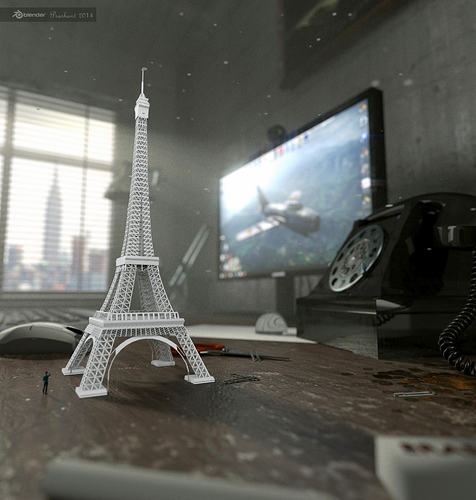 nice renders prashant0t4, is very interesting the result you have on materials and lighting on your works, in some aspect have some similar, and mark you own style.

Thanks a lot bro

Are you looking for critique? If so, what do you want critique on? I have a lengthy critique written up, but I figured I should ask before I bombard you with an essay.

Really good work, and nice to see someone who love a French building (I hope is not the Las Vegas model :P) Just few points chocked me a little bit: first, the middle mouse button; I think you have forgotten to plug your materiel index, then, your background is still a little bit noisy, you should try to increase the sampling or play with the post-processing nodes to solve that. Finally, your eiffeil tower looks too clean for the rest of the scene even if it’s the focal point. It looks like if it’s was rendered on a seperate render layer. You should try (if you don’t want to texturate it), to add dust particles on the front of it or to add a kind of small lens flare through it to blend it well with the background. I have to say that my advises are just to try to help you a little bit with an external point of view but your work at this step is quite good enough.
(Apologies for my bad english)

This is my critique from a few days ago. Sorry it’s an essay.

You have a good start, I think. I like how you’re framing the center of interest (the tower) with the rest of the scene. I like the models and materials of most of the objects, the bump feels relatively natural and the bokeh certainly lends to the scale. I’m really liking the environment you put the scene in (NYC, right?); the room feels natural enough to fit into NYC. There are some particular bits that bug me, though, so I will go through the major points first.

First off, the shadows aren’t convincing me. You have a soft shadow on the tower, but a hard shadow from the mouse and phone. The shadow side of the tower isn’t dark enough to contrast with the lit side. If everything else has a darker shadow, the tower will pop out and look unnatural. In addition, they are pointed in the wrong direction. Make sure the shadows are consistent (all hard or all soft) and point in the direction opposite your light source (the window).

Composition is something that can get really nit-picky really easily. Breaking down only the major components, there are four places my eyes want to look: the bright window; the bright, detailed monitor; the tower; and the telephone. The reasons why I look at these particular points is this: I look at the window because it’s a very large, bright patch; the monitor is brightly lit and very detailed, even if it’s bokeh blurred; the tower because it’s the most prominent object in the scene; the telephone because it’s a stark black object surrounded by a much brighter scene. An image should have one focal point that takes the main focus of the viewer, while the rest of the scene complements it and makes it stronger. As it is, you have a number of objects that are fighting for attention.

These are the main points. There are a few really nit-picky things that jump out upon further inspection, but they aren’t terribly important. Primarily, just keep an eye out for tangents and where corners meet.

Again, I think you have a really good start on this. One other thing I really like is the dust particles and volumetrics in the light. My only questions now are how you lit the scene and how much of the scene is modeled versus image texture. Good job! I’d like to see it progress.

Great work!
Is the dust rendered or post-processed?

Thanks, the dust is rendered

What’s the material of the dust? Node tree pls

Is that War Thunder?