missing letters when text as mesh with boolean modifier

hi all,
i have a strange problem with disaapering letters.
i have a text, remesh that, bend that with simle deform, and convert that into a mesh in order to unite it with another object. some of the letters are disappearing after the boolean union operation. they were there before. i tried different handwriting fonts, same problem, different letters. i also tried different octree depth in the remesh modifier.
magic or did i do something wrong

thanks for your help,
michael

hello richard,
i am beginner, so i hope i did understand correctly.
i did A for select all, went to edit mode and hit control N nothing happened. the letter was still missing.
in object mode control N is new window with cube.
i may have misunderstood something and i would appreciate some more explanation.
thanks
michael

You need to be in edit mode when you press A

I wouldn’t recommend the boolean modifier for that.
It’s not even necessary to join the objects together to one mesh as the shading is lacking double normals of vertices if I got it right.

in edit mode i cannot select all vertices. i have 3 objects, text, and two cubes. i can only select one of them in edit mode. if text is selected and i press A this chages the text.

well i want to 3d print the whole object. if there is another possibility of getting the mesh together and export it as .stl i can try that as well.
thanks,
michael

i think i found a solution.
i convert the text to a mesh and then select both objects and press ctrl J to join them. then no letters are missing.
but thanks for your help.
michael

Well i want to 3d print the whole object. If there is another possibility of getting the mesh together and export it as .stl I can try that as well.

I haven’t delved deeply into the printing world yet but from what I understand intersecting mesh is ok for most printers. At least the ones at the big sites like Shapeways and iMaterialize. So you can have your letter mesh pushed into the other mesh (joined as one object with Ctrl-J) and the printer will consider it all one solid.

thanks everybody, having solved one problen the next follows immediately

the edges of the bend letters are not clean, they are deformed at some places.
is there a nice way to fix that?

With such a complex shape it’s almost impossible to create a clean model from what I see.
I would use the text to knife project it on a cilinder, but then I would be stuck on creating a bent embossing.
A linear one could be done in an easier way.

By the way, do you wish for printing 9mm tall letters?
Is the printer capable of printing that small detail level?
If not, why to worry about parts of some edges that are off on the model?

these prints are not perfect , but if they would be a little better that would be enough for my purposes. i think the slicer gets confused with the small mistakes and then produces also mistakes.
i would be happy about any suggestion to get rid of the small errors. 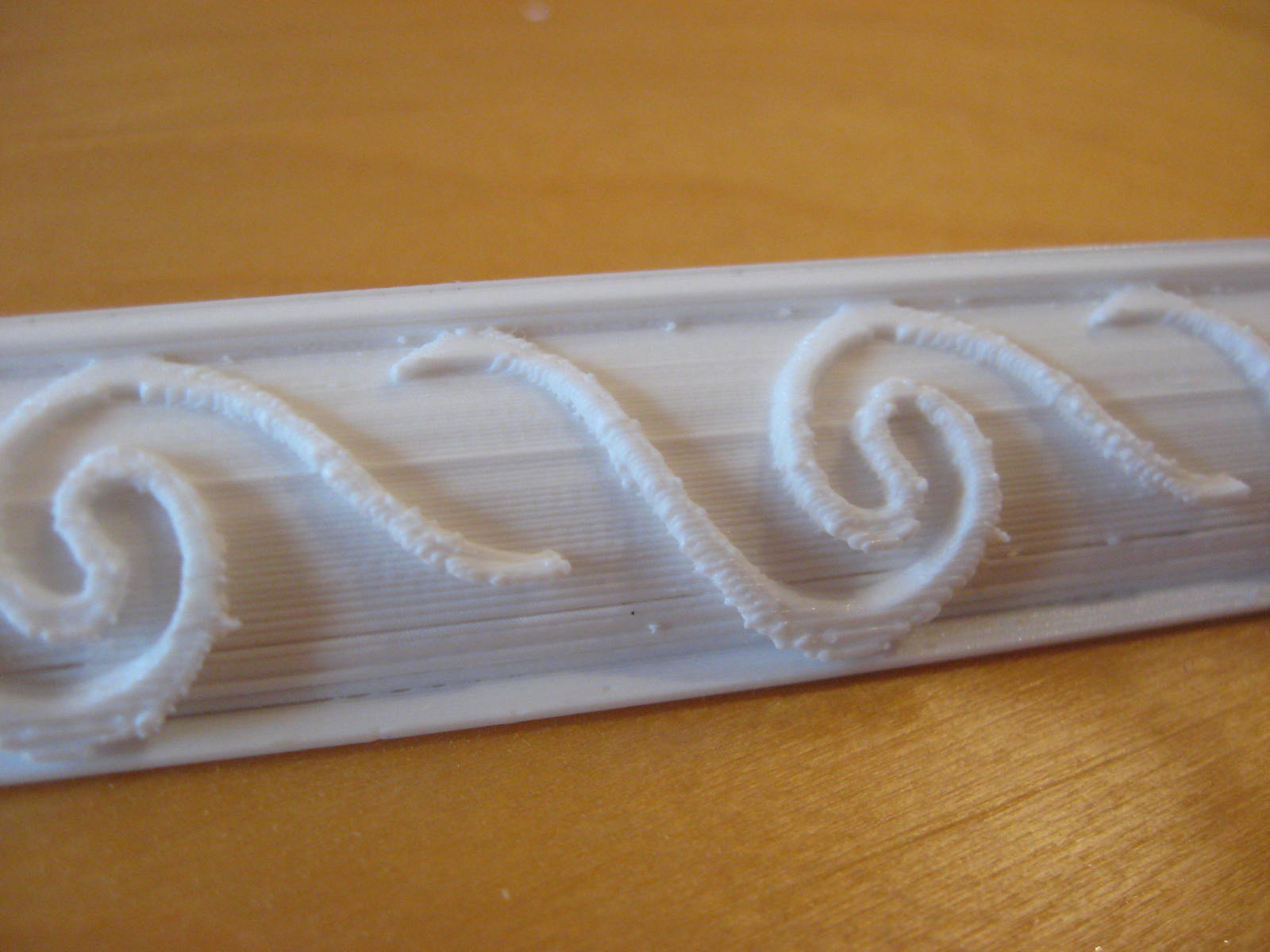 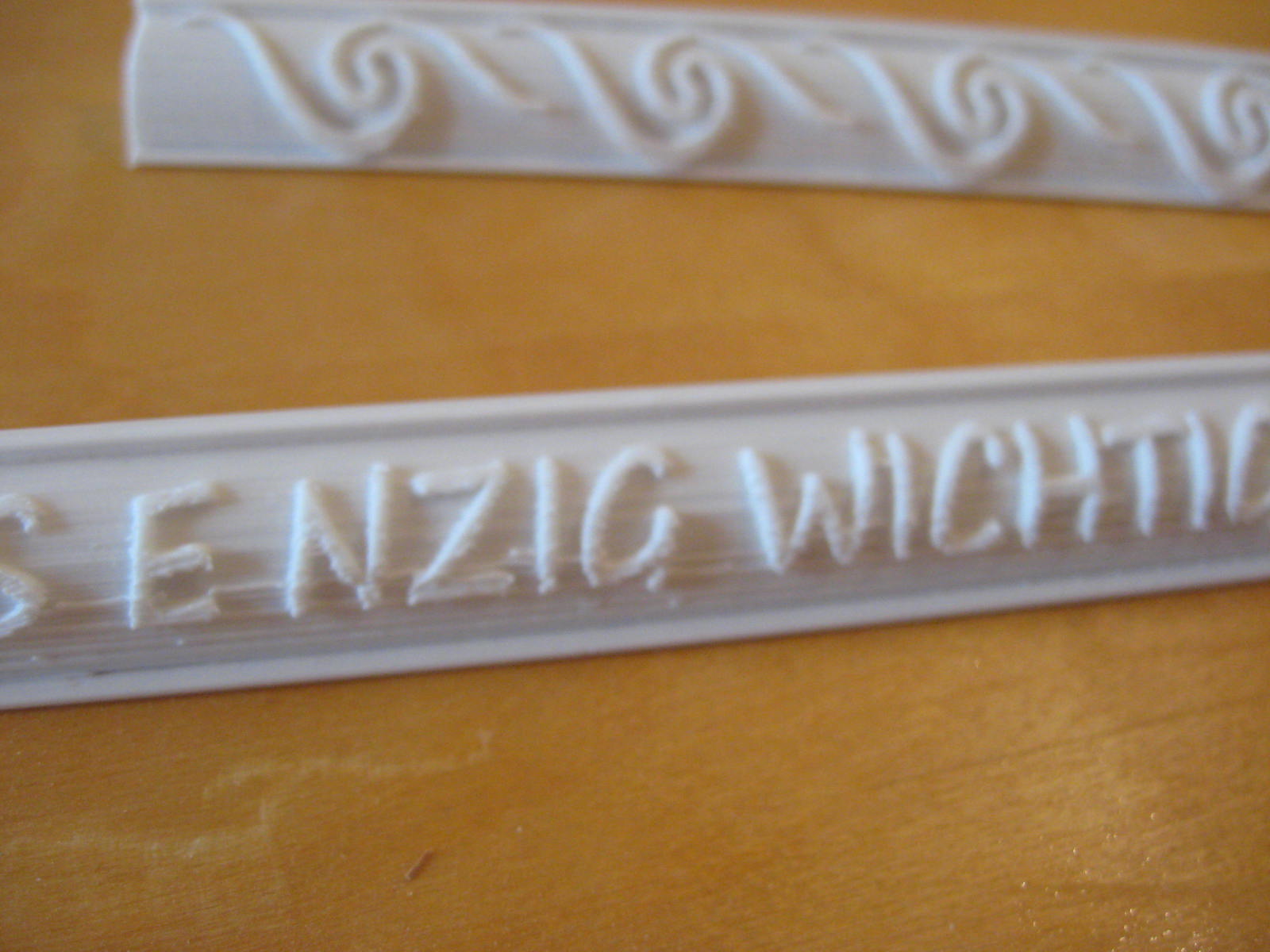 Corrected the background model on this one:
https://dl.dropbox.com/s/vfwexe6c0fj91dl/missing%20letters2.blend

“Cleaning” the letters to me seems useless to be honest.
If you still had a version with the original letters converted to mesh,
-!without any bevel!-
and bent to the right curve, you could use that to create a much cleaner model,
by some knife projecting.

thanks for your corrected version, but to be honest i dont understand what you did. i am too much newbie i suppose.
but i changed to the simple blender font, and there the mesh is much more clean. so i might have to stick with these simpler fonts and ornaments.