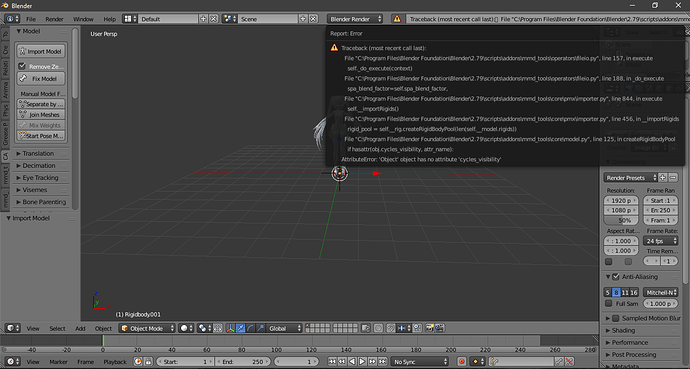 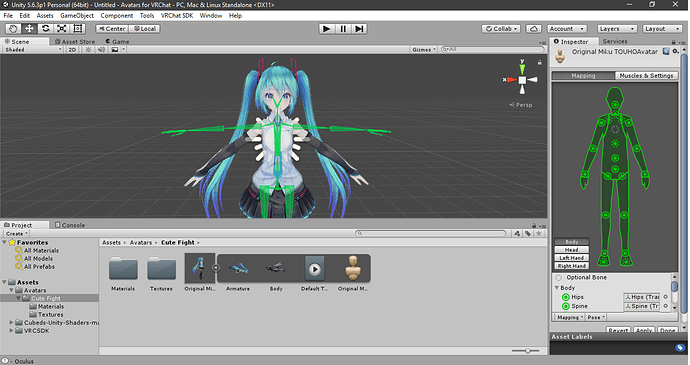 Hello everyone, let me just start by saying this is my very first post on this website and forum so please bare with me I’m very sorry if I’m not using the format correctly or not posting in the right spot, I honestly don’t know any better.

Now onto my issue, so basically I have been trying to import MMD models to use in VRChat for about a week now spending at least 3-4 hours every day trying to bypass all the problems I’ve come across in both Unity and Blender and while I don’t have any hate for either of the programs since 99% of the issues I have solved were due to my personal lack of understanding and ignorance and just plain frustration blinding me from simple fixes. This one particular issue though, seems to have thrown me for a loop and I think after many hours I have figured out what might be causing it at the very least. I have asked different people in the VRChat Discord help channel, many people in VRChat itself and various Youtube comment sections (yes I sunk that low) and no one seems to know what exactly the issue is and are unable to help so I have come here to bother more people with my problems.

Sorry for the rambling, here’s the issue: Basically everything is fine up until I try to rig the model as ‘Humanoid’ in Unity. I will drag and drop the model in and she will sit in A-pose, which is fine because most do that anyways. Then I select her and rig her as humanoid, and select ‘configure’ which is where my problem comes in. The model does not move out of A-pose into T-pose like she should. Normally it should do it automatically and if it doesn’t, it’s a quick fix of selecting ‘pose’ and then clicking ‘enforce T-pose’ right? Well, for me unfortunately it’s not that easy. At least every time I’ve looked up this issue that’s even remotely similar to mine that button seems to be the end-all-be-all solution but for me I think it’s a bit more complicated. So what happens when I select ‘enforce T-pose’ is the the bone structure will form the T-pose while the model will remain in A-pose (as shown in image #2). I have also tried selecting the ‘reset’ option which makes the bones match the models current pose but this makes the arm and some hand bones turn red(as shown in image #3). I have tried uploading both these bone rigs into VRChat with them both, while being able to move around, end up sitting in A-pose in VRChat. I have tried this with over 10 different models from different websites, in different styles, by different creators and everything I can think of and with no avail they all sit firmly in A-pose and I assumed the whole time my issue was the models I was using or unity being broken. I have also gone and uninstalled all programs Unity and Blender and all shaders/plugins included and re-downloaded and extracted them all to only have the same stiff A-pose model issue.

I have also tested out ‘pose mode’ in Blender after using CATS blender Plugin’s magic ‘fix model’ button to move around bones and see if the mesh moves with it (was asked of me to try by someone over in the Blender Rigging support channel over on the VRChat Discord) but the mesh doesn’t move an inch and the bones move around just fine.

Before you start commenting that I shouldn’t be on Blender Help forums but on Unity forums if my problems lies with them but today I noticed something I hadn’t noticed before in Blender and I think it may be what’s affecting my models in Unity. It’s a quick error message that doesn’t really do a good job of making itself known especially if your not looking for it or have no idea its there to begin with. I only noticed it today because I accidentally clicked it or hovered over it I’m not too sure and the expanded version of it came up (as shown in image #1) and as someone super new to Blender/Unity I didn’t know this is how and where error messages are displayed so please keep the ‘ur an idiot for not seeing it lulz’ to yourself. Nonetheless I noticed it now and it seems to be an issue with my MMD_tools plugin. I know that you can’t import a model through CATS unless you have MMD_tools installed which leads me to believe that if there is in fact a serious error with my MMD tools it could be whats affecting the mesh of my models. I have tried importing several different models and they all come up with the same error message so I think this might be what’s causing my issue but here is where I need help with, I don’t know what the error message is trying to tell me or what it wants me to do to try and fix it. I’m not sure if its because I’ve got the wrong kind of blender or the wrong kind of MMD_tools for this version of blender? Have I just installed MMD_tools wrong or put it in the wrong place? I’m not sure, but I’m praying to every God that exists at the moment that if I can fix this MMD_tools issue that it will fix the stuck A-pose model issue that occurs later in Unity.

If anyone can please explain it to me and is willing to help me in detail about this issue and is gonna let me ask a lot of questions because I’m dumb and don’t understand stuff good then I would be super grateful! Thanks for reading (:

try setting the render engine to “cycles”. looks like the plugin is hard coded for it.

looks like you are losing your weights somewhere down the line, could be due to the error.

Hey, thanks heaps for replying.
Now by “set the render engine to ‘cycles’” how exactly do I do that? I’m super new to all these programs and while I understand the basics, anything other than that is completely new. Hopefully the weight thing is due to the error, if it’s still causing problems after I’ve fixed this MMD_tools error I think I’ll be officially done.

Please ignore my last comment! I found it and it fixed it THANK YOU VERY VERY VERY MUCH FROM THE BOTTOM OF MY HEART. I know it was a simple fix in front of my face but as someone so new things like this can be quite complicated but thank you for taking the time to comment and help me out!