OK, I’ve had Blender for a long time, and I really like it, but I haven’t joined any communities yet. Now I’m having a problem I can’t solve, so I thought this would be a good time to start.

Anyway, I’m trying to make a simple mesh of some Japanese characters for a Sudoku game I’m making, but I don’t want to make each one from scratch. I have the characters in notepad, now is there any way I can put those into Blender? Like in a text object or something? I tried the insert text button, and I used several different fonts that worked in notepad, but it puts in a bunch of random Roman characters instead.

I really don’t want to make each and every character using curves, please tell me there’s an easier way!

Maybe you could increase the size of the font in notepad. Then use print screen and paste it into a image. Then use the texture feature that creates stufff like hills in games.

Maybe you could increase the size of the font in notepad. Then use print screen and paste it into a image. Then use the texture feature that creates stufff like hills in games.

That’s different, but it’ll probably work. I’ll try it, thanks.

EDIT: OK, I can see the characters, by making the texture affect normals, but it’s little more than a bump in the plane I put the tex on. Isn’t there a way to apply materials to the object or something? Then I can just scale the z axis.

why don’t find a japanes font

I found a couple, but I think they were real Japanese fonts, for Japanese keyboards, etc. When I typed with that font, it still did Roman characters. I’ll try Microsoft font, though.

OK, Ricky, I have Japanese fonts, and with Google I figured out an easy way to type in Japanese with an English keyboard, but Blender doesn’t seem to support unicode, so it can’t display Japanese characters. I can type Japanese into Notepad or Wordpad, but not Blender.

Supposedly, from the same site as I learned to type Japanese, I can make it work on programs that don’t support unicode somewhere in control panel, but I can’t find it yet. Wish it was more specific…

And, Zarnik, I’m not sure what you were talking about. But, letters and characters aren’t the same, if that’s what you mean. Letters are A-Z, while characters are A-Z, a-z, 0-9, all those symbols above your numbers and in other places on you keyboard, and any other wierd thing you can make by holding alt and hitting numbers in your num pad, such as

maybe you could try typing the Japanese text into inkscape, converting the text to an object, then importing the svg file into blender, since it looks like inkscape does support unicode.

Well, I have Japanese on my system and I couldn’t paste Japanese text in edit mode. To get it working I had to select a Japanese font, then “Insert Text” and choose a .txt file with the Japanese text.

Yes, they are spelled the same. Different meaning. See this “character” definition #11. The same word with the same spelling can have many meanings. 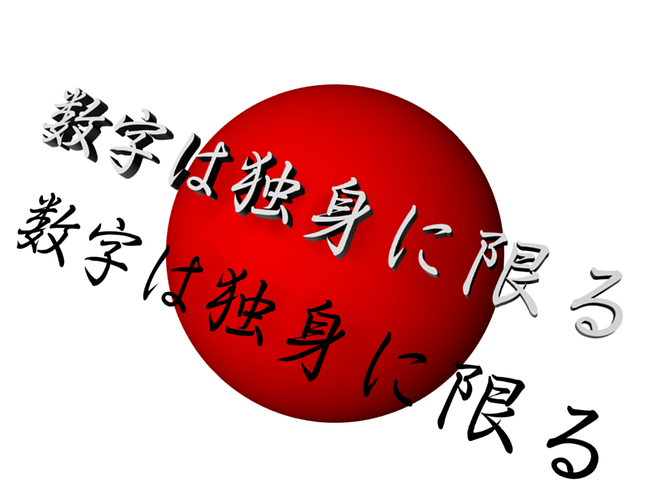 is there a site where we can get this font and doc and is it free ?
with the font you can type he text that you want
mind you that japanes has a minimum of 5 ,000 characters for the simplified one and close to 10,000 for the full version of their alphabet
that’s a hec of a lot of characters
Salutations

is there a site where we can get this font and doc and is it free ?

I don’t know if that font allows re-distribution. You can use whatever Japanese fonts you have on your system.

I think I found that font here:

linked from this site:

Yes Kanji got that many letters, but there’s hiragana and katakana. And they are just like our alphapet.

but if anybody else needs it we ahve a reference here

OK, harveen, that’s really strange. That’s exactly the same font and method I used before I even posted this here, maybe I messed up somewhere else. Oh, well, I’ll just strip that part of the mesh from your model if you don’t mind.

Thanks for your help guys.

Oh, well, I’ll just strip that part of the mesh from your model if you don’t mind.

Sure, go ahead. Or you can just try to load in the text file. The text file I posted is Unicode rather than ANSI/ASCII, which might have been your problem.

Well, I have Japanese on my system and I couldn’t paste Japanese text in edit mode.

and some free Japanese fonts are available on,
http://www.geocities.jp/ep3797/japanese_fonts.html

also you can get kanji from the web page or some web services. google transrator , e-j dictionary , ajax IME http://ajaxime.chasen.org/ and so on.

[EDIT]Add a URL , there are many links for Japanese language
http://www.sabotenweb.com/bookmarks/language.html

Once you have the Japanese characters in Blender, you can sytlize them by converting text to mesh (and do all the fancy materials and texturing too)

Thanks for the link to Tkinter, Manda. It will help to make entering Japanese and other international Unicode fonts much easier. Your other font and language links are great too.

Once you have the Japanese characters in Blender, you can sytlize them by converting text to mesh (and do all the fancy materials and texturing too)

That’s what I did with the example .blend file posted above. The lower text is 3dText (but you need the external font), while the upper text was converted to a mesh and extruded.

Sorry I couldn’t get on yesterday. I now have the text exported in 3ds format for my game. If I can finish this one without too many bugs, I might put it online and post a link to it. We’ll see. I just program as a hobby, so I might not even finish the thing.

Thanks for the link to Tkinter too Manda, that should help a lot in the future.