so once again(as a big noob) i need some help

i am trying to model a gun from this concept, i can box it out, but when its time to do the rounded parts i get lost.

So my question, could someone model this gun for me in very basic fashion as a little tutorial style?

im not asking for the whole thing in all its detail, just something that is the basic shape. 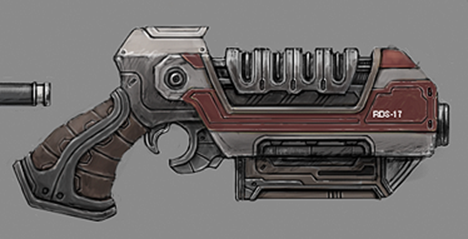 the first thing you should do is decide which parts will be separate meshes. once you are focusing on a piece instead of the whole thing it should be easier. there is no reason to do something like this as one solid piece, but if you want you can always go back with retopo, which is also a good way to add little details once you have the basic shape down.

yes but the issue is making the rounded shapes, i dont know how to do that without screwing up the entire mesh of that part this for example, i can make it in boxes but thats where it ends http://i.imgur.com/4YIDsjX.png

you can make that by making the base shape, and then using the retopo tools to lay down ribbon-like pieces for the decorative bits, then turn off snapping, extrude and scale outward along the face normal ( shortcut alt-s ).

Here’s how i would start it

1st something very simple, it’s important to keep it simple as we’re going to bevel later and we don’t want extra edges screwing up the beveling Then we complete the base It’s important to delete the faces that may be at the mirror symmetry center, we don’t want internal faces in any modelling cases, it’s very bad. Now that done, select those edges Something important to note is that this process has created ngon faces (faces with more than 4 vertices) , in many cases it’s bad (unwrapping, subsurf etc…), so let’s get rid of them now, as the more you model the more ngon may be generated, and it’s easy to forget them once your model is completed We can use the knife there, press K then hold CTRL and cut there Enter or Spacebar to validate the cut Do the same for the top Now if you want you can add edge loops (CTRL+R) to help make the central part thing following more of the background image
Then select your central thing : (without having to press F6 you could just press I , move the mouse until you see no thickness, then hold CTRL and move the mouse to increase the depth)

As previously, be very cautious of internal faces, there should be some after that process , select them and delete them : That should be it for the base, after that, adding more edge loops, moving vertices, etc… to get more details
By example, the central thingy and its crease Then press I and inset only with Depth and 0 Thickness and later with some subsurf, edge crease etc … you can round things more Thanks, that was extremely helpfull!

ya gotta love the help you get in this group *****