Modeling Embellishments Directly Into a Shield?

I modeled the Hero’s Shield from Zelda: Majora’s Mask, and I did the embellishments by knife projecting them into the face of the shield and then insetting/extruding. This was my result: I ended up with a lot of N-gons and tris in random places because I didn’t think much of it until I was done the shield. I also ended up with this problem with the frame of the shield because I modeled the face directly into the frame. How would I model the shield in a way that wouldn’t use N-gons or tris? The way the shield is now, using a sub-surf modifier would be a nightmare. This wouldn’t be so hard if the shield face wasn’t curved.

should be easy using retopo ( surface snapping tools ). once you have your initial shape, you make a new mesh on top of it by snapping vertexes to the surface of the other mesh. this allows you to plot out your topology more easily because you don’t have to tweak your vertexes around in 3D space. it’s more like drawing on an object. there are some tutorials out there. if you have trouble you can come back for help. and also, you can plan easily for additional details as you go, that don’t exist on the base object.
(edit) here’s an example of using retopo on a base mesh that was sculpted: 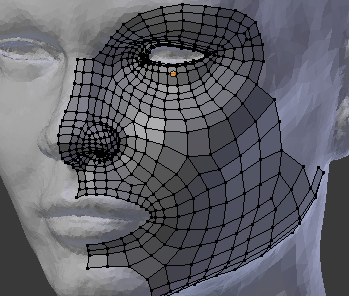