MOdelling an Xbox 360, How best do i add details?

Hey all. so im experimenting with the shrinkwrap and array modifiers, to create an xbox 360

I have modelled the rough shape of the box with a cube and some edge loops,

now i went to add in some of the detail by creating seperate objects, using shrink wrap to get them in position, then applying the mod & joining the meshes, this, i thought was a correct way to add these kinds of details…
here is where i am having trouble.

The First two images show this pinching around the ‘button’ - I started with the circle for the main button. this one worked out ok, but there is pinching at the top and bottom which i cannot figure out…

So how to I add these flaps the the model without creating a ton of edge loops that destroy the models shape?

i cant move the edgeloops to the immediate right of the extrusion loop, without messing with the smoothness of the front panel, however this extrusion loop creates pinching to the sides and looks odd…

im really stuck here as to the technique to use to get top results as i have seen on everyones work here. i am trying to grill these techniques into my head but so far what i thought would be a relatively easy model to well, model, has turned out to be really challenging

I could really do with someone to help me work out these problems to help me progress as a modeller.

thanks for any assistance. 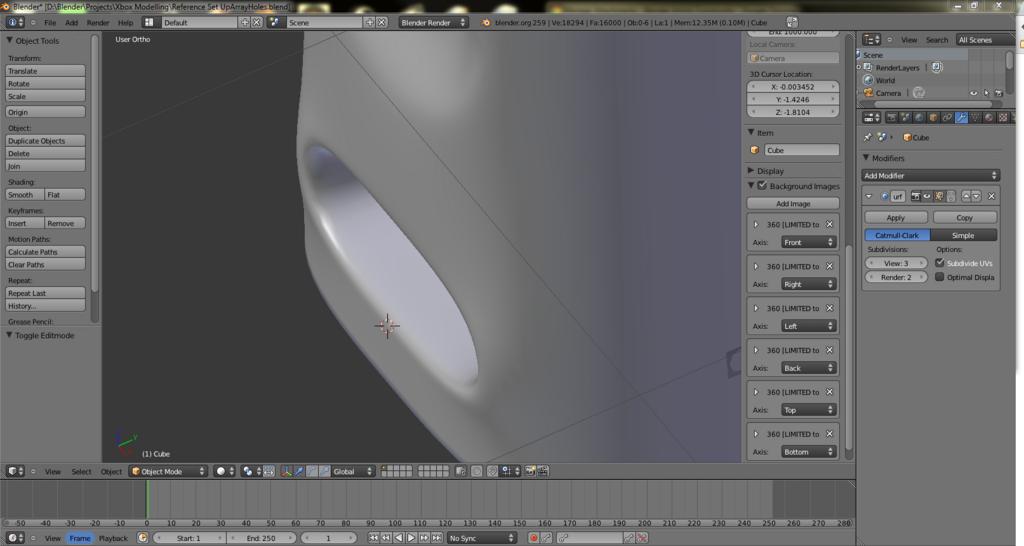 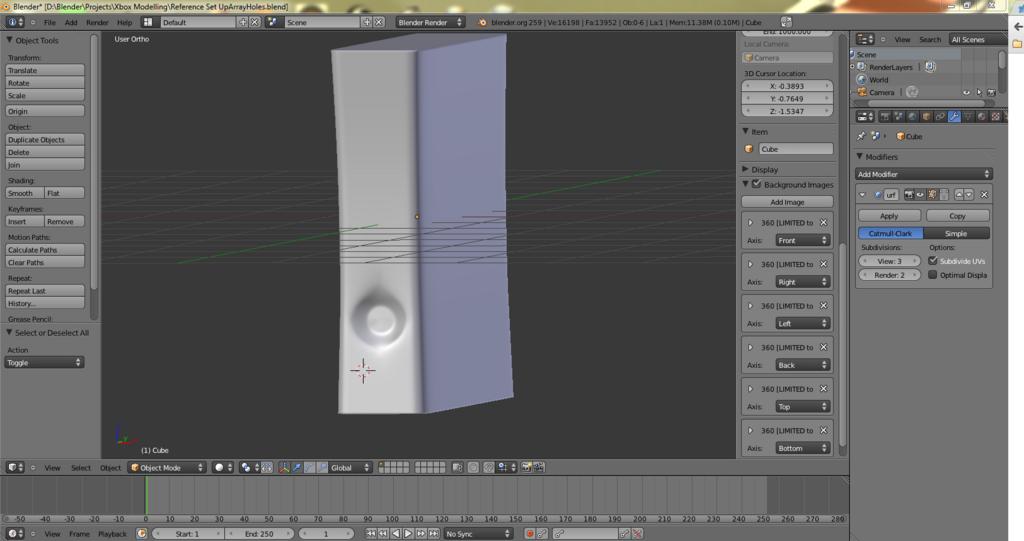 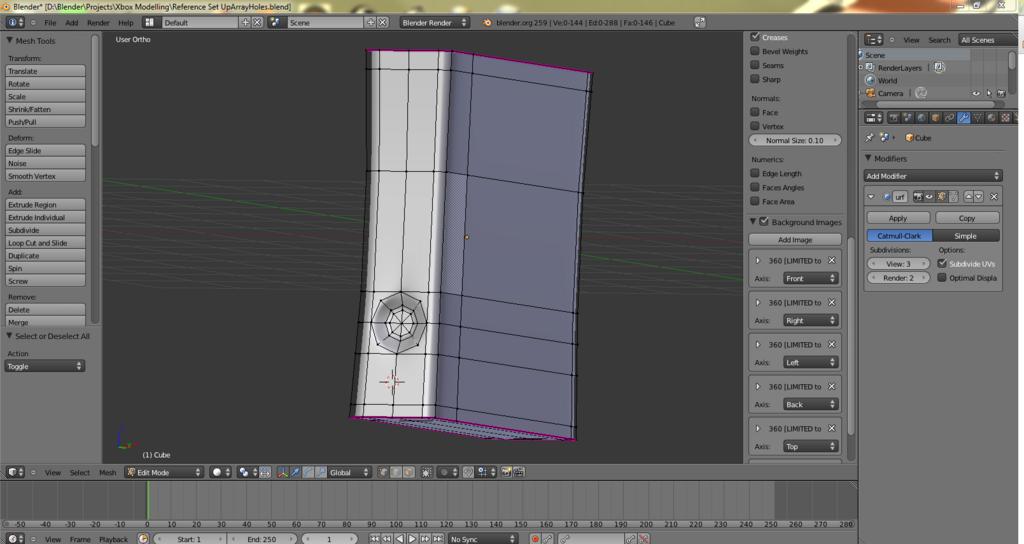 Well, I’m not an expert, but I can tell you that hand-modelling stuff works much better than shrink wrap. I would recommend using Sculpt Mode instead of the shrink wrap modifier, and using a Mirror modifier on the model, while mirroring the sculpting. Then either use retopography or normal maps. For little things like vents, I would unwrap the model and use UV textures created with GIMP or Photoshop. Hope it helps!

Hey Man thanks for your help

i did hand model the vents but i may create them as a texture depending on how heavy and hardcore they will be to model, but i am looking to create a really detailed good model. without sacrificing topology.

Really though how would you create the slits & flaps on the front panel? everything i try means adding loads of edge loops that mess up the model, i cant see how its done at all!

Well, as long as it isn’t an animation, you can use UV textures for the memory card slots. For the disc slot, I would advise slight subdivision, but nothing too overzealous. Then delete some of the new vertices and use extrusion from the edges. If you lose any edge-loops, I would select what should be a loop, press Ctrl+E, and select Edge Loop.

your first problem occurs because you use very ‘strange’ quads. the polygons in the corners of the circle look like triangles. try to model with geometrie where every polygon looks like a square. i made a little example. for very good hints on hard surface modeling you can watch this tutorial. 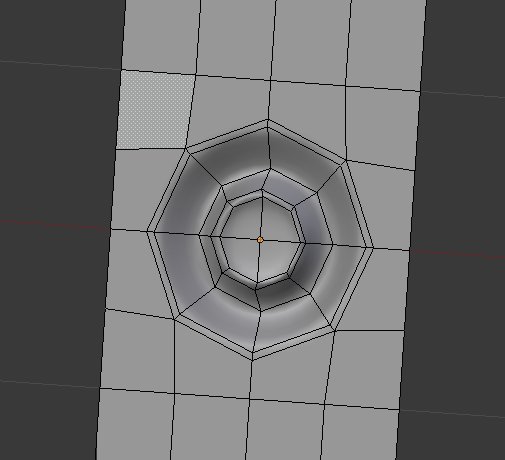 You’re trying to define a complex surface using too few verts. You need at the very least one more circular edge loop around the button and (taking into consideration that the front panel is slightly rounded and not flat) you need more vertices in the circle. 16 or 24 ought to be enough. Model the front panel as a separate piece to avoid loop spaghetti. After all, it really is a separate piece (I’m assuming that’s the original 360 design, not the slim, I can’t tell from the picture.).

Ok so here is screen shot number one. i have increased the amount of verts on the first circle, and created a nice face of equal quads

it has created a lot of edge loops up the rest of the model though, is that ok? also i am currently modelling it flat for topology purposes as its easier to work with right now. is this wise or shall i bend it to shape first?

finally, how to i now cut out the parts above the circle? edge loops i add just create extra triangles within the circle and are really not very good, how to i model the rest of it to not mess with what i have already created?

Thanks for everybody’s help
Josh 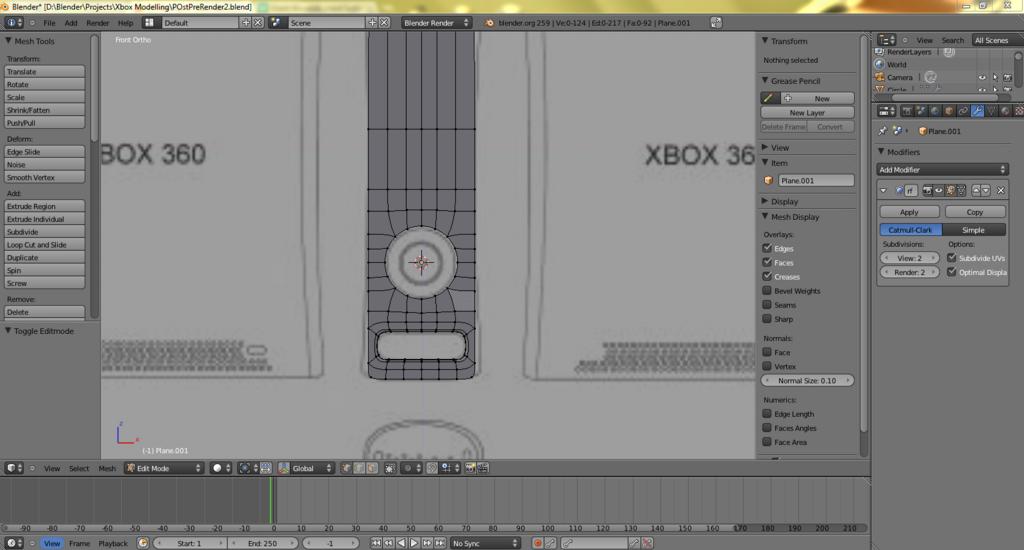 Dude, one more thing I think nobody pointed out. When modelling real life objects, model them in parts, like the real life objects are modeled. For example, in real life the 360 has screws that held various panels to each other. Model these panels separately, instead of modelling the entire console in one big complex mesh. Will save you lot’s of headaches

More, to make a smooth circle in a subdivided mesh, you don’t need more than eight vertices. I will only make everything more complicated. There are some exceptions of course, but in your case I would go with only eight vertices. 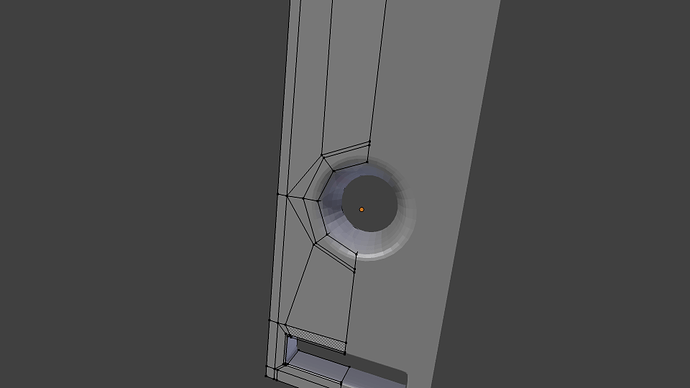 Ok so here i have added an 8sided circle to the mesh. it looks great. and the quads are well formed. instead of squashed and odd shaped.

now, i also created an extrusion loop at the bottom there with no problems. that too looks good

now here is my question. how to i add to this mesh without messing up all the topology i have now. or how to i change the topology to enable me to doso? shall i seperate the panel into different sections? or can i create ‘closed’ loops so that they dont effect lower down?? 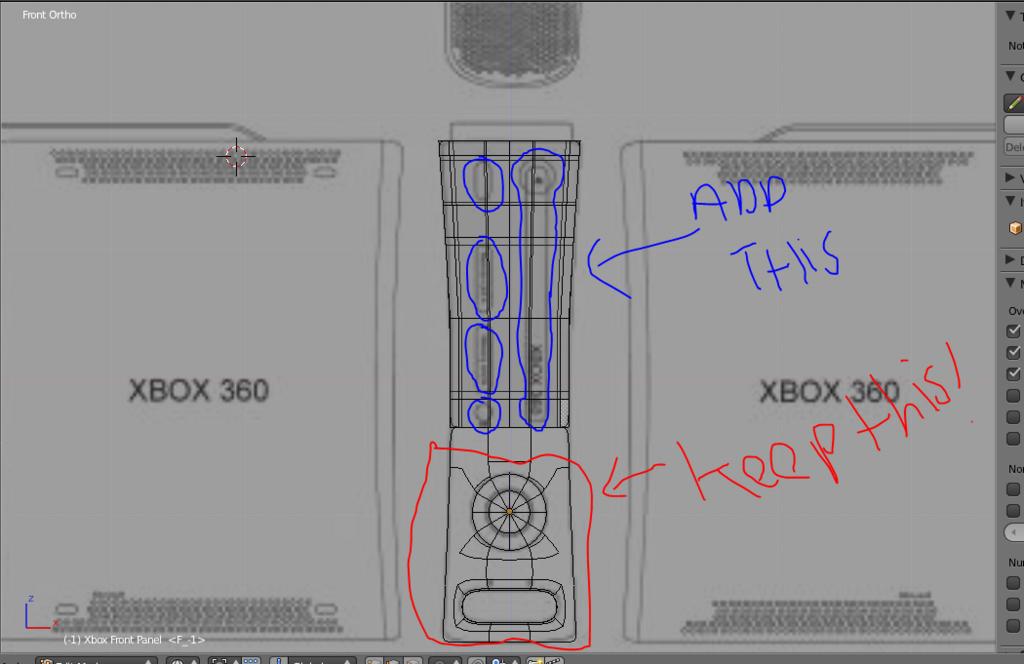 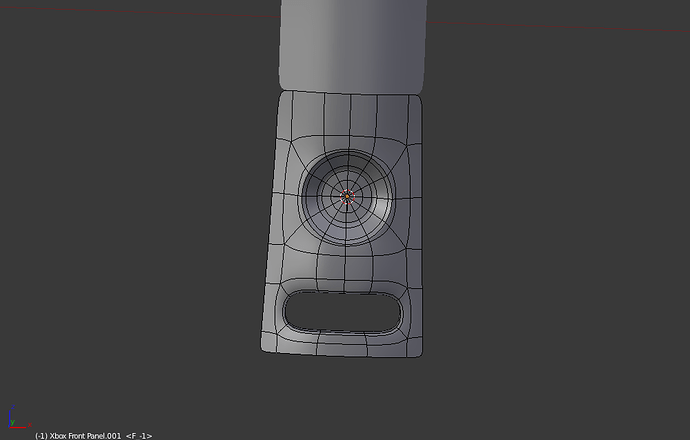 OK Sorry for the doube post but i think ive made some progress,

Here i have managed to create a closed circuit by ripping the mesh. this means i can mess around in there without messing up the bottom

HOwever, the triangles are causing slight pinching and also make the smooth curve a bit, well less smooth.

is this just a matter of tweaking? or can i turn these into nice quads that will make a difference??

Thanks again for all your help, 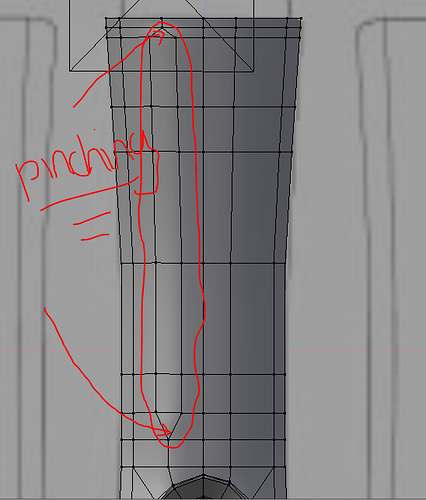 Quads would probably make a difference. But instead, you probably should try making verts inside the loop, then deleting them and extruding the loop. Then try fixing the pinching. This is getting a little beyond my area of expertise now, though.

Ok thanks for everyones help, but i am not making progress anymore

I cannot understand, or even comprehend how to get rid of this pinching and get this model to have smooth topology and yet have all those added circles and cutouts…

So im asking, can someone please build this front panel how they would, get it looking good and then send me the blend?

i know im asking alot but i just cant figure out wtf im doing or not doing that is wrong. or how to fix these issues. im trying for a perfectly done model topology wise. so that it looks smooth, with as little faces as needed with edgeflow that works nicely.

i looked at the tutorials on here but i cannot figure this stuff out yet.

Thanks for your time
Josh