i have problem modelling an object thickness by using the basic extrude method, im fine with simple shape like circle, but how about complicated shape, in which all the vertices distance are varied relative to pivot point? need guidance from blender expert out there. pls see the image below. thx! 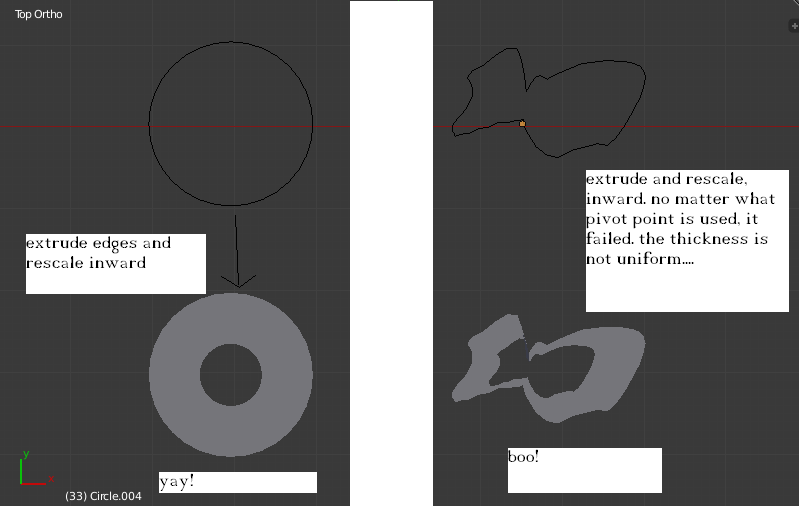 Complicated shapes are, well, complicated… Select all in edit mode and hit F key - this (hopefully) will create not too terrible n-gon - face with more than 4 edges. I-key or Inset will create edge loop at some offset value you can adjust. Shift-R repeats previous command. Problem is since initial shape is complex some edges might cross on corners; this would require manual corrections.

thx for the replies guys , it worked. i wonder though, in older version like 2.49b, no such option available to create uniform or at least proper mesh thickness … so what method was used at that time?

my bad,just found it, its in script form, not an option from drop down menu. anyway, im still interested in alternative way to do it in 2.49b if any.

Not so concerning animations - there is a bigger gap.

And, for your so-called “complicated shape” (#4), how about modeling it initially as a curve, with a bevel? You can then convert that to a mesh. The problem with your fourth shape is that it really does not have a single “center point.” (Well, as an object it of course strictly does, but in terms of what you see when you deform it, not so much.) Another possibility is to create two shapes, then use one to “punch a hole in” the other. Still, expect to do clean-up of the resulting geometry. :rolleyes: