I owe my creativity of this Kitchen scene render to Andrew Price’s starter tutorial for the Architecture Academy. Most of the models I’ve used are from blendswap.com for which am grateful for the community there.

This is my first original architectural rendering. I’ve looked at a lot of Kitchen renders and they are always so brightly lit. I’ve tried adjusting the lighting to make it more bright and realistic but I end up over-brightening the end of the table. I’ll very much appreciate tips on how to do better lighting.

Also, all critique comments are welcome. 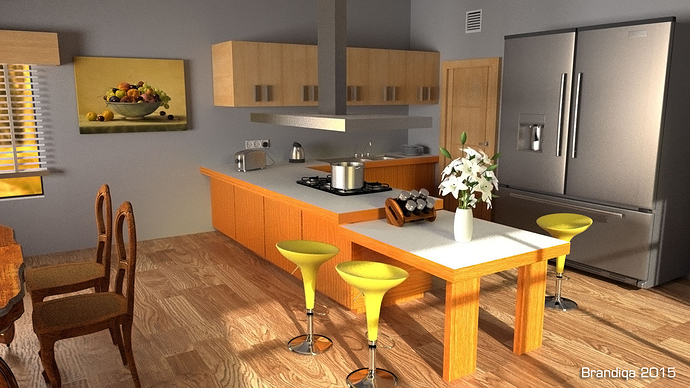 P.s. I used hdr lighting, emission planes, and a sun lamp to do the lighting. Rendered this in cycles at 300 samples(my computer has restrictive hardware specs)

Hi, it looks quite well, but you overkilled Hue/Saturation and lightning a bit. Make the collors less bright as well as the lightning. The wooden floor has bit too much contrast. For lowering your render times try to use portals, less lights, no caustics, less bounces, right size of tiles (16x16 for CPU; 256x256 for GPU), cache BVH and spatial splits.
Also maybe replace those wooden chairs with something modern.

Also maybe replace those wooden chairs with something modern.

Or, if you’re going for the contrast between the old and the new, make the chairs even more ornate and old fashion looking. And maybe move the table in a little bit more so we see more of it. (The top looks very nice, what’s visible of it.) But basically, I like it. It has a toaster!

Lighting is flat… Tired of saying that, I’m just going to do a tutorial

To me the biggest thing letting this image down (A thing Andrew Price actually talks a lot about in his video) is that the scene doesn’ t make perfect sense (it’s really not terrible by any means) and that there is a disconnect between the elements of the scene. You said that you got many models from Blendswap and thats also kind of what it looks like for example the chairs and the table in the left corner look like they belong to a household of old people like maybe 70 years old, while the right part (at least some of it) has a very modern style (you can see what im talking about when you over the rightmost 2/3rds with your hand and it looks a lot better already

). Someone else mentioned above that he would be scared to wahs dishes in that kithen because he would fear being hit with the door by someone entering the room i totally agree on that other examples of insensible design is for me to have a wooden floor in the kitchen, the saling of many things, the height of the barstools ompared to the tableheight (how are you supposed to use that table?), the closeness of the aisle, the huge space that there must be between the furnishing like the cupboards and the ceiling (must be at least 3-4 feet) and some more missing baseboards while i’m at it

So what you need badly is a more human design and a stronger onnection between the different objects. What i like already are the materials i think you got them down very nicely and also the composition is not too bad maybe the foal length is a bit too low for my taste but apart from that its nice (also that you have the camera aligned with the corner of the room helps a lot nice work there! Hope i was able to help cheers

Thanks everyone for the feedback. Am waiting for a laptop with a gpu where I can do a render with higher cycles. I’ll also take all your input into consideration which includes:

The only challenge remain is connecting the elements between scene as pointed out by ChrisCordova. I’ll be waiting for that lighting tutorial by fdfx, meanwhile I’ll try out a new lighting technique I discovered using sibl.

I’ll also try some bokeh effects to see if that helps with composition. It will be a month or so til I get a new laptop which I’ll be ordering from states to Kenya.

I’ll update this thread once I do a second render. Thanks guys for the constructive critiques.